Working 24/7 to save baby manatee orphaned in Colombia 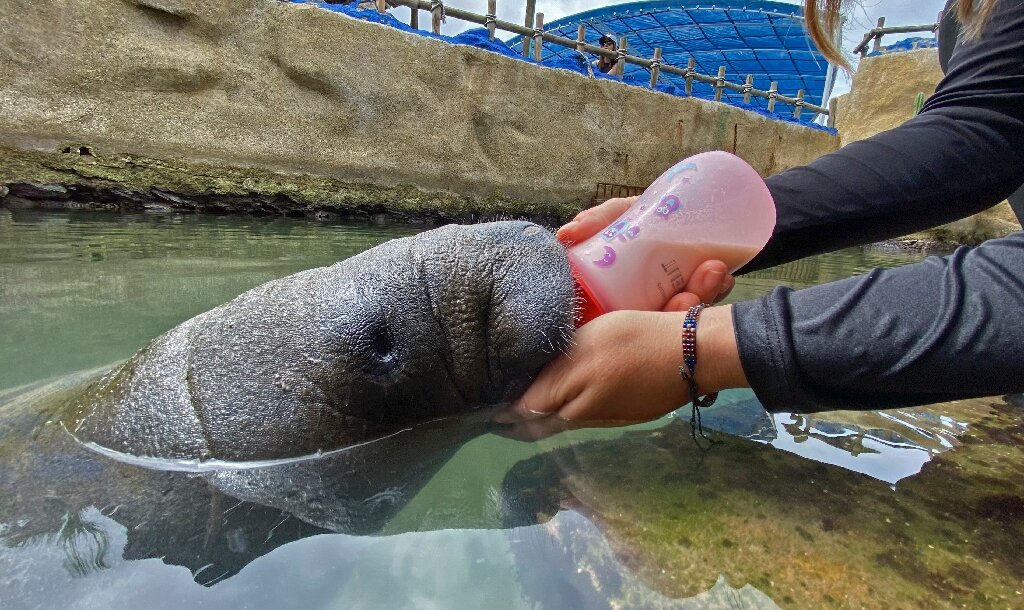 Last September, Tasajerito the manatee was found lost in a Colombian swamp, just three days old and separated from his mother.

Nine months later, the baby sea cow weighs as much as an adult woman and is bottle fed round the clock by doting aquarium staff.

Though much stronger now, Tasajerito’s prognosis is still touch-and-go, said Angela Davila, a veterinarian at the Rodadero Aquarium in Santa Marta in northern Colombia, near where he was found.

“Tasajerito is… still considered critical,” Davila told AFP. “He appears strong, he appears lively and to be feeding well, but things can change in a heartbeat.”

Rescued by fishermen, Tasajerito was brought to the aquarium with little hope of survival.

A search for his mother proved fruitless.

Now safely ensconced in a dedicated pool at the aquarium, he has clung to life—increasing his consumption of a special vitamin-boosted milk formula six-fold in a few months.

Yet, he is still “a newborn,” said Rodadero marine biologist Julieth Prieto, who noted that manatees are raised by their mothers for five years and suckle for half that time.

“This makes the rehabilitation process… a challenge because we have to meet those needs that the mother usually provides,” she said.

Tasajerito’s human foster parents are also teaching him to float, dive and swim.

To be released into the wild one day—hopefully in about two years’ time—he will have to grow to between three and four meters in length and weigh some 600 kg.

The American Manatee species (Trichechus manatus), to which Tasajerito belongs, is listed as “vulnerable” to extinction on the International Union for Conservation of Nature (IUCN) Red List, its population of some 10,000 individuals on the decline.

Threats include residential and commercial development, aquaculture and shipping lanes, with watercraft strikes responsible for a large number of deaths, according to the IUCN.

In Colombia, hunting by humans is a major threat, as are hippos—a foreign species introduced by drug trafficker Pablo Escobar, who imported some as pets in the 1980s.

The hippos now number more than 100, competing for food and space with manatees.

The manatee is one of the world’s largest aquatic mammals, and according to Prieto, fulfils “irreplaceable ecological functions” in its population area that stretches from Brazil’s east coast all the way to the southeastern United States.

Seasonal migrants, they help keep rivers and water channels clear, devouring as much as 50 kg of aquatic plants each every day.

“If this species were to become extinct, we would have to dredge to restore water flow between rivers, swamps and the sea,” Prieto said.

Florida manatee feeding program to wind down as temps warm