Why This Week’s ‘Strawberry Moon’ Will Be So Low, So Late And So Luminous 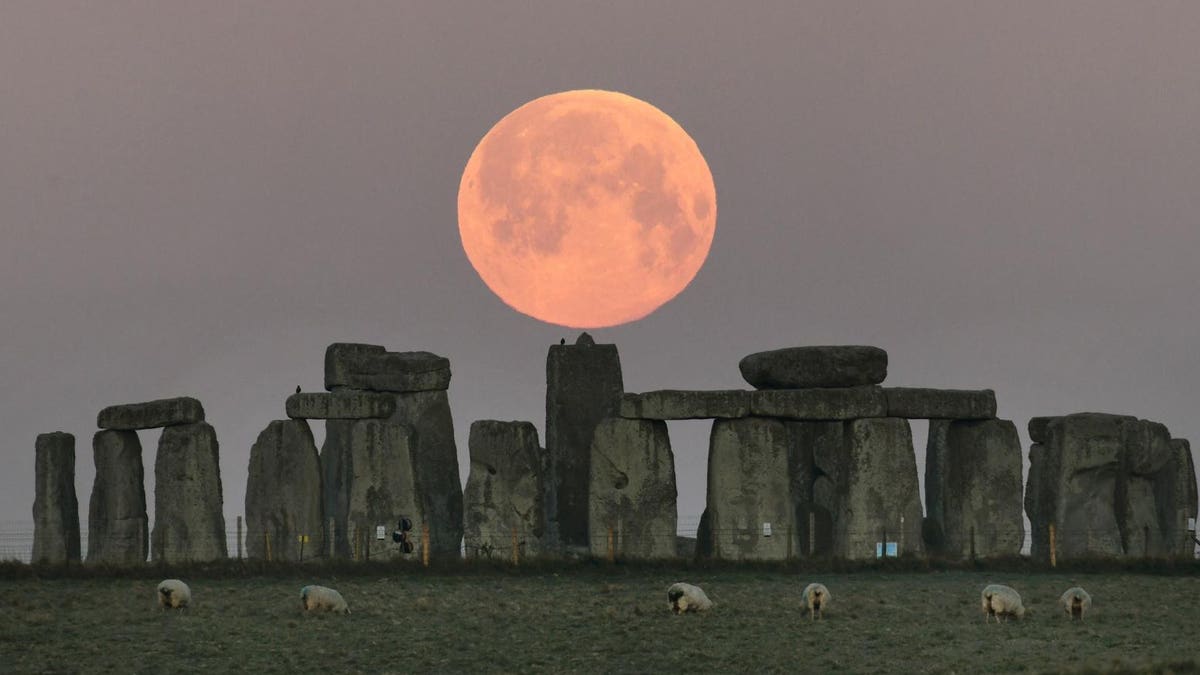 Moon-gazers in the northern hemisphere are getting ready for some low-hanging fruit this week as the “Super Strawberry Moon” rises.

June’s full Moon is the lowest and the latest to rise of 2021. It also happens to be one of the brightest full Moons of the year.

Here’s why—and also why it’s not going to be red like a strawberry, but a beautiful orange color that’s sure to stun:

You know the ecliptic. It’s a circle in the sky along which the Sun appears to move throughout the day.

Since the Moon orbits Earth along a path that’s just 5º inclined to the ecliptic, the Moon should more or less mimic the Sun, right? Sure, but the Moon moves eastward far quicker than the Sun, rising 50 minutes later each day, and by full Moon it’s opposite the Sun as seen from Earth, so the opposite applies.

So the full Moon rises in the southeast in summer and sets in the southwest, staying as long in the summer night sky as the Sun does in winter.

Why the ‘Super Strawberry Moon’ will be so big and bright

One consequence of the full Moon being so low in the sky is that it will seem bigger than it is, purely because there’s some context for the human brain to compute. That’s the so-called moon illusion.

However, there is another technical reason. This full Moon is the final “supermoon” of the 2021. It will appear to be about 7% bigger than most full Moons because of its closeness to Earth in its slightly elliptical orbit. In practice that’s difficult to perceive.

Astronomers tend to hate the term “supermoon,” forgetting that the media-friendly buzzword is actually a helpful warning to coastal communicates for whom a perigee-syzygy full Moon (the unusable astronomical term!) can cause flooding.

MORE FROM FORBESMars, Venus And A ‘Super Solstice Strawberry Moon’ Sparkle In Twilight: What You Can See In The Night Sky This WeekBy Jamie Carter

Why the ‘Super Strawberry Moon’ will rise so late

This is purely because in the northern hemisphere it’s close to the summer solstice, when daylight is the longest and we experience the shortest night. Since all full Moons rise around the time of sunset—that’s an inevitable consequence of Earth being in between the Sun and the Moon—moonrise occurs at its latest in June.

That goes double for this full Moon, which occurs just a few days after the northern hemisphere’s summer solstice on June 21, 2021. Since that’s the shortest night of the year north of the equator, to the full Moon in June must also be in the night sky for the shortest time of any full Moon of the year.

Why the ‘Strawberry Moon’ will look orange, not red

Full Moons are not red. You’re thinking of last month’s “Super Flower Moon,” which did turn a reddish color for 15 minutes. That was a rare total lunar eclipse and it looked awesome. Sure, it would have been nice if this month’s “Strawberry Moon” was also eclipsed, but the celestial mechanics don’t quite favour that coincidence.

The next total lunar eclipse is on May 16, 2022 when Canada, the U.S. and South America will see a red “Flower Moon” for 1 hour 24 minutes. However, the “Beaver Moon” November 19, 2021 will be partially eclipsed, with 97% of it going a reddish color as seen from the whole of North America. So it will almost be a total lunar eclipse.

However, if you watch this month’s full Moon at moonrise it will appear a bright orange color.

The Moon looks orange whenever it’s close to the horizon, so at moonrise and moonset. The effect is at its the most impactful when it’s a full Moon, partly because it occurs in a twilight sky. You’re seeing the effect of Earth’s atmosphere, which is densest near its surface. Earth’s oxygen and nitrogen-rich atmosphere will absorb light with short wavelengths—such as blue—and only let through colors with longer wavelengths—such as orange.

The result will be a beautiful late-rising orange orb that will gracefully and gradually rise into the summer night sky. If you’re outside enjoying the warm evening, be sure to stay out a little longer to see the “Super Strawberry Moon” appear.

Denial of responsibility! TechCodex is an automatic aggregator of the all world’s media. In each content, the hyperlink to the primary source is specified. All trademarks belong to their rightful owners, all materials to their authors. If you are the owner of the content and do not want us to publish your materials, please contact us by email – admin@techcodex.com. The content will be deleted within 24 hours.
full moonJune full MoonMoonsummer solstice 2021Super Strawberry Moonsupermoonsupermoons 2021what is a supermoon
0
Share

Unpacking, a game about moving, might just emotionally wreck me