Which one should you buy? 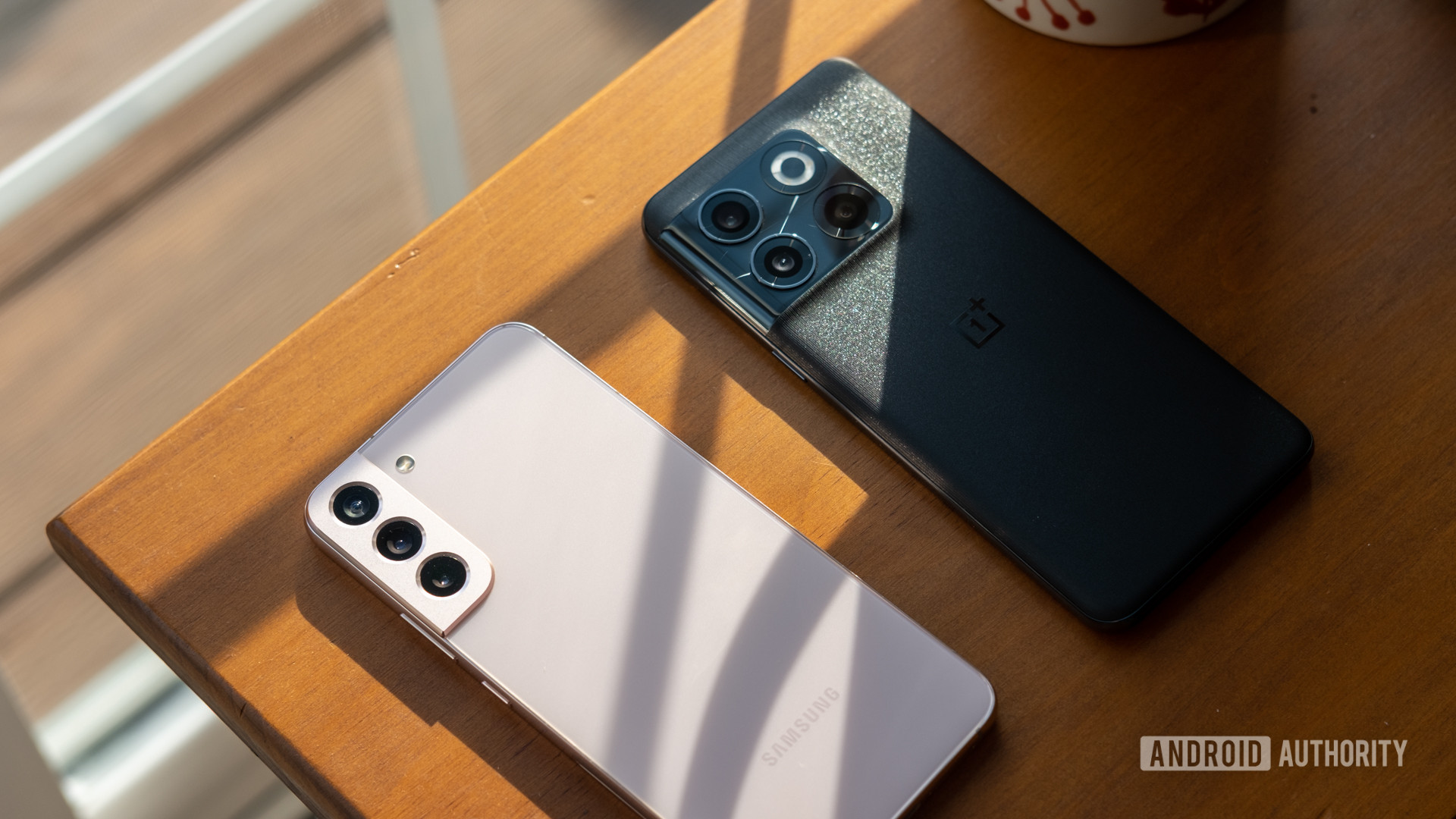 The OnePlus 10T is here, and it’s the company’s refreshed take on affordable flagships. The phone carries Qualcomm’s best chip, so naturally, it goes up against the best Android phones, including the Samsung Galaxy S22. But when you get down to brass tacks, OnePlus’ and Samsung’s devices have a lot of differences that could influence your buying decision. Let’s look at how the OnePlus 10T and Samsung Galaxy S22 compare on paper and the overall value they bring to the table.

For a more in-depth take on either phone, be sure to check out our OnePlus 10T and Galaxy S22 buyer guides.

The first difference you’ll notice between the standard Samsung Galaxy S22 and the OnePlus 10T is the display size. The Samsung flagship is a considerably smaller phone with a 6.1-inch screen compared to the OnePlus 10 T’s 6.7-inch display. So if you prefer larger phones in general, you might find the size of the Samsung Galaxy S22 a bit restrictive. You could go for the bigger 6.6-inch Galaxy S22 Plus (which is pictured in this article), but then you’ll also have to up your budget to $999. We’ll talk more about the pricing of the OnePlus 10T vs Samsung Galaxy S22 below, but before that, let’s see how the two phones cross swords in terms of design, hardware, and other aspects.

Both the OnePlus 10T and Galaxy S22 have a Full HD display resolution with a 120Hz refresh rate, making their display quality comparable. Well, almost. The Samsung phone offers a variable refresh rate that adjusts based on the content being displayed to as low as 48Hz. This also optimizes power consumption on the phone. Overall, the Galaxy S22 has a great, vibrant display that would appeal to most buyers.

While the OnePlus 10T and Galaxy S22 compete well in the display department, design is a whole other story.

The OnePlus 10T, on the other hand, gets an adaptive refresh rate. That means you can toggle it down manually from 120Hz to 60Hz. It doesn’t support variable refresh rates for greater efficiency like the Galaxy S22, but it will dynamically switch between 120, 90, and 60Hz. We noted in our review that the OnePlus 10T’s display of the phone looks fantastic with a neutral color profile and good sunlight visibility.

While the two phones compete well in the display department, design is another story. The Samsung phone features superior Gorilla Glass Victus protection on the front and back. The OnePlus 10T makes do with Gorilla Glass 5. The former is a newer standard and promises more durability, with 2m drop protection and doubles the scratch resistance of Gorilla Glass 6 (which itself was double the durability of GG5).

The chassis of the Samsung Galaxy S22 is also stronger and made of Armor Aluminum, while the OnePlus 10T gets a plastic mid-frame. The latter also feels less premium, and its rear finish attracts fingerprints easily. On the other hand, the Galaxy S22 has an attractive finish, feels premium to hold, and has no issues keeping fingerprints at bay with its satin finish. It also has many more colorways on offer than the two shades of the OnePlus 10T.

You also get superior water and dust protection on the Galaxy S22, which is IP68 certified. That means it’s resistant to submersion up to a maximum depth of 1.5m underwater for up to thirty minutes. The OnePlus 10T gets an IP54 rating, meaning it can withstand a limited amount of dust and a few splashes, but nothing more. The officially IP54 certified model of the phone is also restricted to the US market, so if you’re buying it anywhere else, you’ll get a unit with no official IP rating.

Also see: The best waterproof phones you can buy

Other design elements like the style of the camera bump boil down to personal preference. You might like OnePlus’ square camera housing better than Samsung’s vertical one, but this is hardly a deciding factor, especially when you get down to the specifications of those shooters.

The OnePlus 10T houses the upgraded Qualcomm Snapdragon 8 Plus Gen 1 SoC compared to the standard version of the same that powers the Galaxy S22. We’ve noticed that the former chipset results in better sustained performance, more consistent frame rates, and cooler temperatures on the OnePlus 10T, than regular Snapdragon 8 Gen 1 phones like the Galaxy S22. If you’re in a country that sells the Exynos variant of the Samsung flagship, you would definitely have the upper hand going with a device that houses the top-end Qualcomm silicon.

That said, the Samsung Galaxy S22 is no slouch. It tops out with 8GB RAM, which should be more than enough for most tasks. Storage options on the phone don’t go beyond 256GB, which is also more than enough for most users unless you’re capturing 4K videos all the time. All-in-all, the Galaxy S22 fared very well in our review and packs quite a punch when it comes to performance.

The OnePlus 10T doesn’t disappoint either. It was OnePlus’ goal to make a performance-focused flagship, and we found the 10T to be more than capable in our testing. It even outdid the more premium OnePlus 10 Pro in areas like gaming. Add to that OnePlus’ super fast 150W charging (capped at 125W when charged in the US) and a larger 4,800mAh battery compared to the Galaxy S22’s 3,700mAh cell (its weakest area by far — the battery life is merely okay), and you’ve got quite a solid performer in your hands, though it does lack wireless charging, which the Galaxy S22 does support.

It’s really the cameras of the OnePlus 10T that are a problem and sway us towards the Samsung Galaxy S22. The 50MP IMX766 primary shooter on the phone does a decent job of daylight and low-light images. Its color profile isn’t bad, but not the most accurate in the market. You’ll notice oversaturation and inconsistent HDR performance. However, the photos from the main camera are good enough for viewing on your phone screen or putting up on social media.

An 8MP ultrawide and a 2MP macro sensor complete the setup on the OnePlus 10T, and it’s not a pretty picture there. The ultrawide camera is not great. There’s a noticeable color variance between it and the primary sensor. OnePlus also doesn’t do a very good job of fixing lens distortion from the 120-degree lens, and shots from the sensor are usually blurry.

The macro shooter is just another 2MP sensor that doesn’t really add anything but a number to the camera setup. You can get okay results in good lighting conditions, but you won’t get far in terms of image quality.

You should have no complaints from the Samsung Galaxy S22’s camera performance, but the same can’t be said of the OnePlus 10T.

The Samsung Galaxy S22 is starkly different when it comes to camera performance. It’s one of the best camera phones you can buy right now. It features three lenses: a 50MP main camera, a 12MP ultrawide camera, and a 10MP telephoto lens with 3x optical zoom. Although the phone is the cheapest in Samsung’s S22 lineup, you would hardly notice a difference between its camera results and those of the more premium Galaxy S22 Plus.

The primary shooter on the Galaxy S22 works great in just about any lighting condition. No crushed shadows, like the OnePlus 10T. The color profile is also accurate, and you won’t notice any exaggerated oversaturation. You should also have no complaints about the ultrawide sensor. It maintains colors well and there’s minimal lens distortion. The telephoto shooter is also good, with no noise and impressive stabilization. Add to this a whole host of shooting modes, great night photography skills, and more control with the Expert RAW app, and you have a far superior imaging device in the Galaxy S22 compared to the OnePlus 10T.

Steer clear of the OnePlus 10T if you’re looking for a versatile and effective camera setup.

The 16MP selfie shooter on the OnePlus 10T works well, though. Its low-light performance is also acceptable. The Galaxy S22 has a slightly lower resolution 10MP front shooter. However, it produces decent results in varying lighting conditions.

The Samsung Galaxy S22 is about $150 more expensive than the base OnePlus 10T model. However, you can often get the former for as low as $699 on Amazon. At that price, it’s definitely worth the extra $50. Samsung also offers lucrative trade-in deals, so you can get an even better price for the S22 if you exchange your old phone.

The obvious advantage that the OnePlus 10T has here is that it’s cheaper and offers up to 16GB of RAM at the top end. You might be wondering if you need all that RAM in the first place. The simple answer is that 8GB of RAM is more than enough for everyday needs. But of course, if you think you need more, the top-of-the-line OnePlus 10T is still cheaper than the base Galaxy S22 variant if you consider official pricing.

In terms of colorways, you only have two options to choose from when it comes to the OnePlus 10T. You can either get the Moonstone Black or the Jade Green option.

The Galaxy S22 offers a wide variety of colors in comparison. You can get the phone in Phantom Black, Phantom White, Green, and Pink Gold. Samsung also has some online-exclusive colorways, including Cream, Graphite, Sky Blue, and Violet.

The OnePlus 10T takes power to the next level with 125W rapid charging (150W outside the US) and Qualcomm’s Snapdragon 8 Plus Gen 1 chipset.

The vanilla Samsung Galaxy S22 is subtly tweaked from its predecessor, the Galaxy S21. It has a glass back again (nice!) and features the latest 2022 silicon. It also has an upgraded camera system that should be much better than the 2021 model.

OnePlus 10T vs Samsung Galaxy S22: Which should you buy?

OnePlus’ T series phones have traditionally offered more power compared to their numbered non-T counterparts. However, the story is different this year. The OnePlus 10T is a device for those looking for a top-performing phone at an affordable price. But its appeal is limited for anyone looking for a well-rounded smartphone. The camera setup is nothing to write home about, and the phone is missing key flagship ingredients like a solid design, a competitive IP rating, and wireless charging. The Samsung Galaxy S22 has all of that and much more.

The OnePlus 10T will be great for power users on a tight budget, but in the Galaxy S22, you’ve got yourself an all-round winner.

Samsung’s offering may be more expensive, but you can always find good discounts on the phone. Combine that with attractive trade-in values, longer software and security updates, Samsung’s more polished One UI, a great set of cameras, and a durable design, and you’ve got yourself a winner. If it’s a fight between the OnePlus 10T and the Samsung Galaxy S22, we recommend you buy the latter.

OnePlus 10T or Samsung Galaxy S22: Which do you prefer?

Self-censoring divisive language at work can deplete employees, with spillover effects at home