We’ve Found A ‘Marshmallow’ Planet That Would Float In A Bathtub, Say Scientists 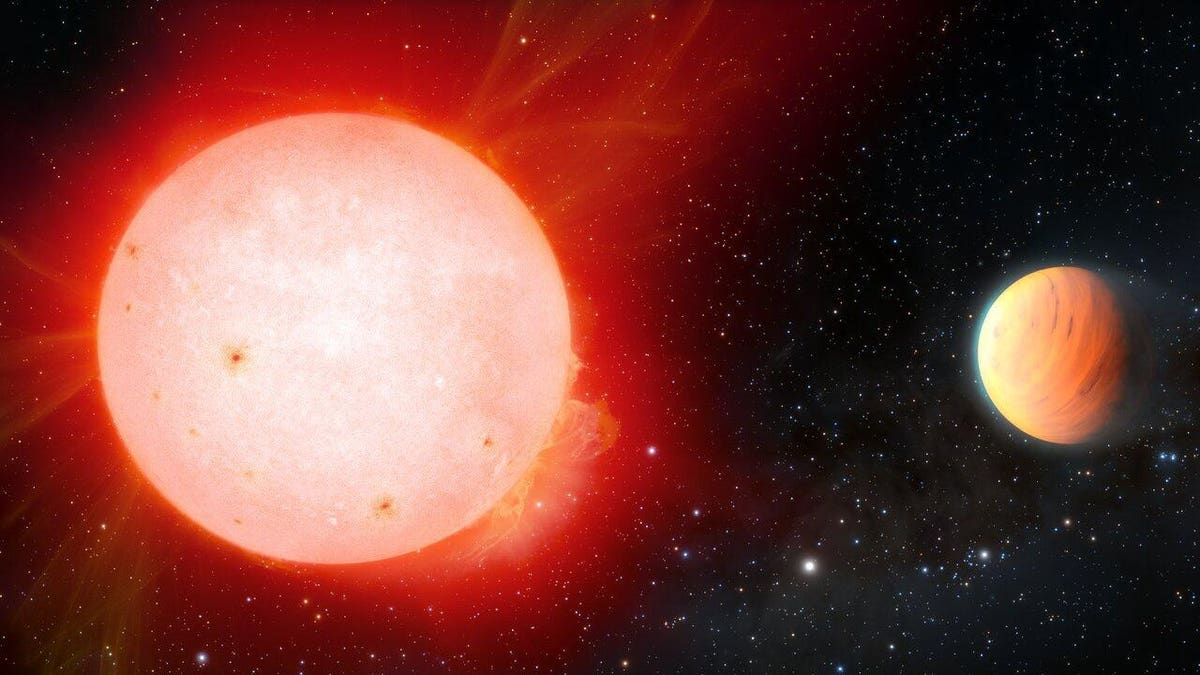 Astronomers using a telescope in Arizona have discovered a Jupiter-sized planet in the night sky that they think has a density similar to that of a marshmallow.

It’s so light it would float in a bathtub of water.

TOI-3757 b is an exoplanet—a planet orbiting a star outside our solar system—orbiting a cool red dwarf star of the kind that makes up about 70% of stars in the Milky Way galaxy. It’s around 580 light-years distant in the constellation of Auriga, which can be seen rising in the east after dark this month from the northern hemisphere.

Its mass has been calculated to be about 17 grams per cubic feet/0.27 grams per cubic centimeter. That’s a quarter that of Jupiter, half that of Saturn and similar in density to a marshmallow.

It comes just weeks after the discovery of barium—which is used to make the green color in fireworks—in the upper atmospheres of two exoplanets, one of which receives “iron rain.”

It’s the fluffiest and lightest gas giant planet ever discovered around a red dwarf star and to discover TOI-3757 b is something of a surprise. Despite being cooler than stars like our sun, red dwarf stars often unleash powerful flares that are thought to be capable of stripping a planet of its atmosphere.

“Giant planets around red dwarf stars have traditionally been thought to be hard to form,” said Shubham Kanodia, a researcher at Carnegie Institution for Science’s Earth and Planets Laboratory and first author on a paper published today in The Astrophysical Journal.

So far astronomers have only been able to find giant Jupiter-sized planets farther away from red dwarf stars. “Finding more such systems with giant planets—which were once theorized to be extremely rare around red dwarfs—is part of our goal to understand how planets form,” said Kanodia.

So how did TOI-3757 b form? One reason could be a particularly slow evolution, which has affected the accretion of gas and, therefore, its current density, say the researchers. Another could be its orbit, which the researchers suspect may be slightly elliptical. If that’s the case then TOI-3757 b will occasionally get particularly close to its host star, which could cause excess heating and a bloating of the planet’s atmosphere.

The planet was initially discovered using NASA’s Transiting Exoplanet Survey Satellite (TESS), which revealed it to be 100,000 miles/150,000 kilometers in diameter—just larger than Jupiter—and have a 3.5 day orbit of its star.

Astronomers recently suggested that Earth-like exoplanets may be much more common around red dwarfs than previously expected—and that we will find an exoplanet in this decade that has oceans, beaches and continents.

Denial of responsibility! TechCodex is an automatic aggregator of the all world’s media. In each content, the hyperlink to the primary source is specified. All trademarks belong to their rightful owners, all materials to their authors. If you are the owner of the content and do not want us to publish your materials, please contact us by email – [email protected]. The content will be deleted within 24 hours.
exoplanetexoplanetsJupitermarshmallow planetNASAsolar system
0
Share

‘Crysis Remastered’ trilogy will release on Steam in November

Apple says these are the best security keys around…