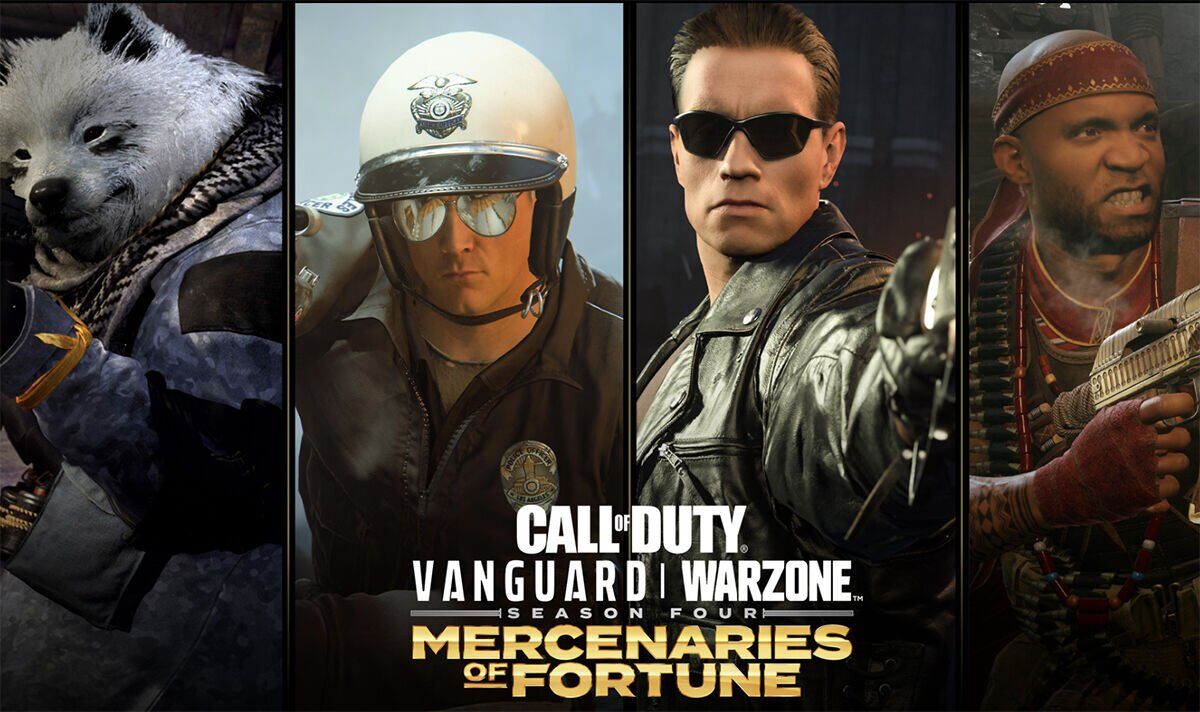 Call of Duty Warzone and Vanguard are getting a couple of huge mid-season updates later today. The Call of Duty mid-season update has a July 27 release date and a 6pm BST UK launch time. Titled Mercenaries of Fortune, the Season 4 refresh adds a brand new map to Vanguard, as well as some high-profile Operator bundles and a host other new features.

Activision explains more: “Once a battleground for the living, Call of Duty: Warzone and Vanguard is about to be swarmed by zombies and overrun by machines in Mercenaries of Fortune, a mid-season update launching on July 27.

“As part of this mid-season rollout, expect the Model T-800 and T-1000 Terminators to arrive from the future via Operator Bundles. There will also be “Titanium Trials: Endurance” in Caldera, the rise of Zombies in Rebirth of the Dead… and more!”

Needless to say, the mid-season refresh launches alongside a huge update, which you can read about in the patch notes below.

• Enemy nameplates can no longer be seen through various surfaces across multiple maps.

• In a listening post near the Pacific mountainside, Desolation is littered with destructible aspects to create intriguing gameplay scenarios.

• Look for the Desolation 24/7 Featured Playlist at the launch of Season Four Reloaded.

• Addressed an exploit that allowed bullets to penetrate unintended surfaces near the East Bridge.

• Bullets will no longer penetrate the truck near the Flak Gun to prevent undesirable spawn conditions.

• In Search and Destroy, Bombs planted near the destructible floor of the Upper Deck will no longer fall to the Mid Deck.

• Bullets will no longer penetrate the vents near the Lower Deck (Bow) to provide viable cover.

• Addressed an exploit that allowed players to shoot through the floor of the Upper Deck from the Mid Deck.

• Players can no longer become stuck while climbing crates near the Lower Deck (Stern).

• Added several new Blueprints to the pool of available Weapons.

• Addressed an issue that caused inaccurate Deaths stat on the scoreboard.

– The Vargo-S is now restricted in Ranked Play.

Ikenna Olowe understood strategy from a young age. As a child in Nigeria, he excelled at chess, quickly surpassing his teachers. He grew strong studying Gidigbo, a martial battle of wits. Balanced in body and mind, Ikenna joined the war effort as a battlefield engineer. His work established critical supplies lines across the globe. Ikenna became a grand planner, knowing when to build and when to demolish. Available to purchase via Bundle.

• Increased grace period for slide kills challenges from 0.15s to 0.5s after sliding.

• Complete an unlock challenge or purchase a Bundle to earn this Weapon.

• Addressed an issue that caused erratic behavior when two Guard Dogs were called in simultaneously.

• Players will no longer receive a Notice prompt with unreadable text after game updates.

• Rarity Sort Filter in the Armory will no longer reset after previewing a Bundle.

• Battle Pass items that are Free for Clans will no longer incorrectly display as Unlocked for players who are in an inactive Clan.

• Corrected the behavior of the Clear Weapons New button after switching tabs in the UI.

• Improved image quality for Bundle logos in the Store.

• Breath of Godzilla Blueprint will no longer cease to glow under certain conditions.

• Flame VFX will no longer transfer from Roland’s War Operator Skin to other Operators.

How to cast VLC player to a TV by using Chromecast