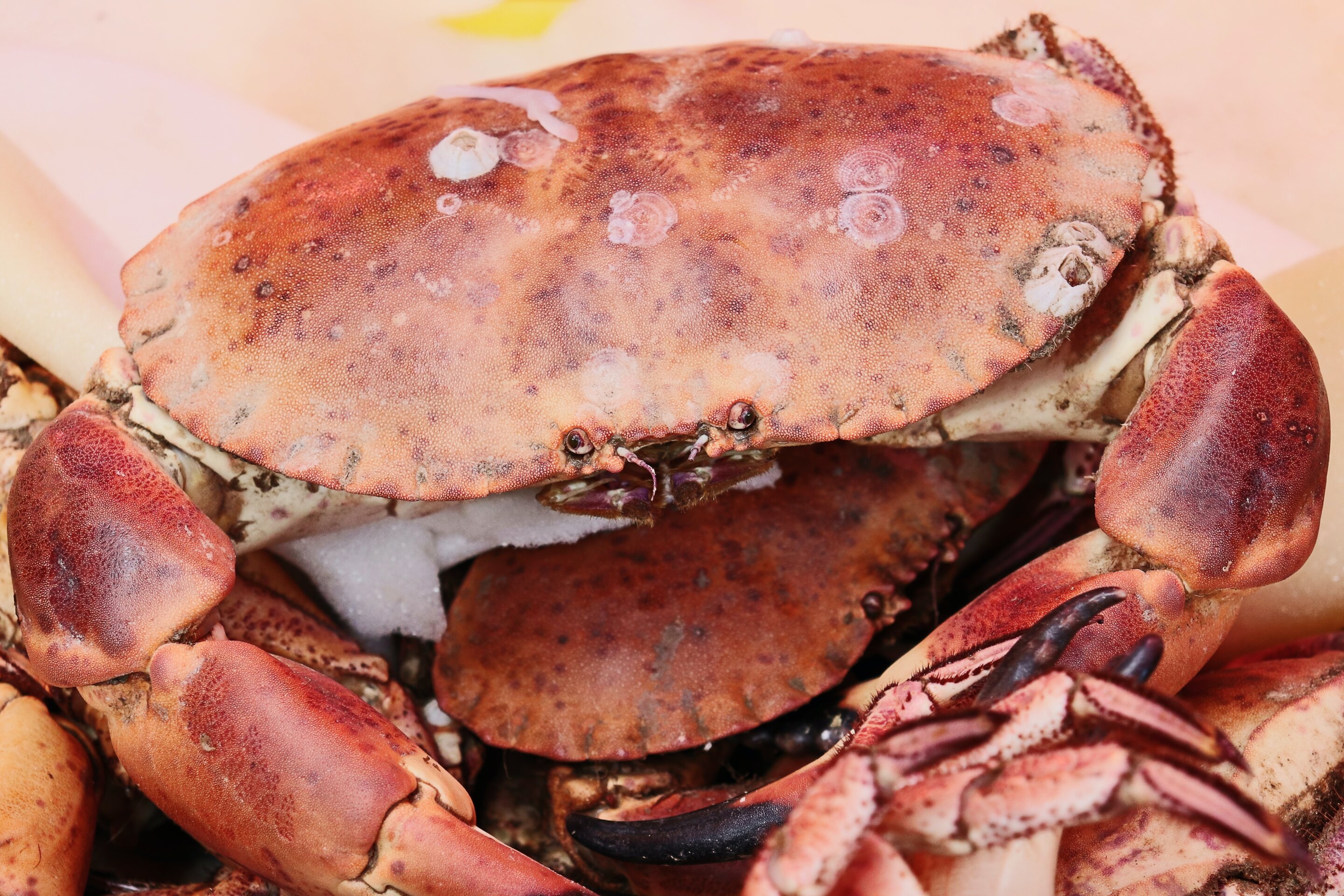 Federal biologist Erin Fedewa boarded a research vessel in June in Dutch Harbor, Alaska, and journeyed to a swath of the Bering Sea that typically yields an abundance of young snow crab in annual surveys.

Not this summer. At this spot, and elsewhere, the sampling nets came up with stunningly few—a more than 99% drop in immature females compared to those found just three years earlier.

Biologists also found significant downturns in the numbers of mature snow crab as they painstakingly sorted through the sea life they hauled up.

“The juveniles obviously were a red flag, but just about every size of snow crab were in dramatic decline,” Fedewa said. “It’s very scary.”

This collapse in the Bering Sea snow crab population comes amid a decade of rapid climatic changes, which have scrambled one of the most productive marine ecosystems on the planet in ways that scientists are just beginning to understand. The changes are forcing them to reconsider how they develop models to forecast harvest seasons.

As waters warm, some older crab have moved northwest, young crab are being gobbled up by an increased number of predators and disease is on the rise. All of this could be making crab more vulnerable to excessive harvesting, and that has increased concern over the impacts of trawlers that accidentally scoop up crab as they drag nets along the sea floor targeting bottom-dwelling fish.

The forecast for the 2022 winter snow crab season is bleak. At best, it is expected to be considerably less than 12 million pounds. That would be down from a 2021 harvest of 45 million pounds and a fraction of the more than 300 million pounds taken during two peak years in the early 1990s.

The iconic Bering Sea red king crab, which can grow up to 24 pounds with a leg-span up to 5 feet, also are in trouble. In a big blow to the commercial crabbers, many of whom are based in Washington, the October harvest for these crab has been canceled, something that has only happened three times before.

Overall conservation measures are expected to wipe out most of the value of the annual Bering Sea crab harvest, worth more than $160 million during the past year, according to Jamie Goen, executive director of the Seattle-based Alaska Bering Sea Crabbers.

“We have gotten a double blow, and the economic impact is unlike anything we have experienced in this industry,” Goen said.

The harvest cutback also will hit some Alaska communities that rely on the crab fleets to help sustain their economies. St. Paul, in the Pribilof Islands northwest of Dutch Harbor, is the site of a major crab-processing plant operated by Seattle-based Trident Seafoods, and depends on crabbing not only to generate activity for its port but also to pay taxes that prop up the local government.

Crabbers want more done to protect crab from some types of fishing, including trawling.

Goen said that crabbers will be pressing fishery managers to step up protective measures, such as expanding zones where trawling is not permitted and finding a way to estimate the unseen death toll of crab passing under nets.

“We need other (fishing) sectors to come forward and protect the crab,” Goen said.

Both king and snow crab are caught off Alaska by steel-framed pots set along the bottom by a fleet of some 60 vessels. Each boat typically employs six to seven crew, some of which have been featured in the Discovery Channel’s long-running reality television series “Deadliest Catch.”

Most of the king crab harvest and snow crab sold in the United States in recent years has been imported from other countries.

But the downturn in U.S. stocks could push consumer prices higher.

Ocean conditions are key for scientists studying the decline of Bering Sea crab, which for all species are now estimated to be at their lowest overall levels in more than four decades.

“This is huge,” said Bob Foy, director of the National Oceanic and Atmospheric Administration’s Alaska Fisheries Science Center. “It is a massive shift for our ecosystem in the Bering Sea, and the implications for other fisheries are just starting to be thought through.”

He notes snow crab juveniles looked to be on an upward trend just two years ago. Then, in the space of 48 months, they appeared to have imploded.

One focus of research is the Bering Sea ice that forms each winter, and acts like a giant platform for growing algae at the base of the food chain. As it freezes, the ice sheds a dense layer of cold, briny seawater that eventually forms a cold pool on the bottom, prime conditions for young snow crab.

In some recent winters, there has been a big reduction in the extent and thickness of the ice.

During these weak ice years, the size of the cold pool has shrunk, a retreat closely mapped by federal researchers.

One of the crab’s voracious predators—cod—do not like the chill temperatures in the cool pool. The warmer temperatures appear to have made it possible for cod to hunt far more young snow crab, according to Fedewa, who said analysis of cod bellies show they are eating more crab.

“The assumption is that the thermal barriers in cold-water habitat that have protected juvenile snow crab from predators like Pacific cod are basically breaking down,” Fedewa said.

King crab also may be suffering from increased predation.

Earlier federal research in the 1980s showed that young Bristol Bay sockeye salmon like to feed on larval king crab. In recent years, there have been a series of strong sockeye runs that may be due, at least in part, to warmer and more favorable conditions in the lakes where they rear before heading to saltwater.

“That is a hypothesis that needs to be looked at more,” Fedewa said.

The warming trends in the Bering Sea appear to be increasing the numbers of crab found farther north. The trends, tracked through surveys, are not fully understood.

The fall Bering Sea king crab harvest was canceled because of low numbers of mature females.

But this summer’s survey found an increase in mature king crab females in more northern areas. These crab were tallied outside the main survey zone, and thus not used to calculate potential harvests.

This last winter, crab skippers reported an unusual harvest season when the main concentrations of snow crab were found some 500 miles northwest of Dutch Harbor, which is about twice the typical distance for February and March fishing.

“The crab that we found were good crab. They were just way farther away than we traditionally fish,” said Tom Suryan, who has fished crab for than 40 years and plans to retire.

Suryan, skipper of the Bristol Mariner, said that he was about 60 miles from the maritime boundary with Russia.

Others’ boats were even closer.

“I could literally spit across the Russian border. I mean, we were on it—down to the quarter mile,” said Owen Kvinge, captain of the Seattle-based Arctic Sea, who suggests some of the U.S. crab may have moved into Russian waters.

Though crab populations fluctuate, there also are cautionary tales of collapses in Alaska that continue to haunt the industry.

In the 20th century, the Gulf of Alaska was the site of a major king crab fishery that boomed and then went bust. Shut down in the early 1980s, it has yet to resume.

The Bering Sea king crab fishery also has a tumultuous history. The annual catch soared to about 130 million pounds in the early 1980s, then crab stocks crashed and the harvest was shut down. Since 1996, in the aftermath of two consecutive years of closures, the harvests have never topped 22 million pounds, and fell to 2.6 million pounds last year.

In a whistleblower complaint filed earlier this year with NOAA Fisheries, a former federal fishery biologist based in Kodiak alleged that federal surveys in the 1970s and 1980s were carried out improperly, with extra tows made in random locations and other steps taken to deliberately inflate the estimates of crab populations.

The whistleblower, Braxton Dew, said the faulty surveys set the stage for overfishing, which he called the primary cause of the king crab collapse. “It was a precipitous collapse, and that’s because of all the bogus numbers that were used,” Dew alleged in a recent interview.

Foy, the director of NOAA’s Alaska Fisheries Science Center, said that survey methods have changed and improved since the time period cited in Dew’s complaint, and that even back then the results were subject to reviews that offered checks and balances.

Later this fall, the Alaska Department of Fish and Game is expected to decide whether the 2020 snow crab (also known as opilio) harvests can proceed, and also is responsible for setting levels for small Bering Sea harvests for bairdi crab and golden king crab.

In the years ahead, crabbers are hoping populations can rebound if strong conservation measures are quickly put in place.

Yet their livelihoods could face a perilous future if the warming climate works against recovery.

“The environmental pressures are enormous,” Suryan said. “Perhaps Bering Sea crab are an indicator species—the proverbial canary in the coal mine. I don’t know. But things are changing, of that we can be certain.”