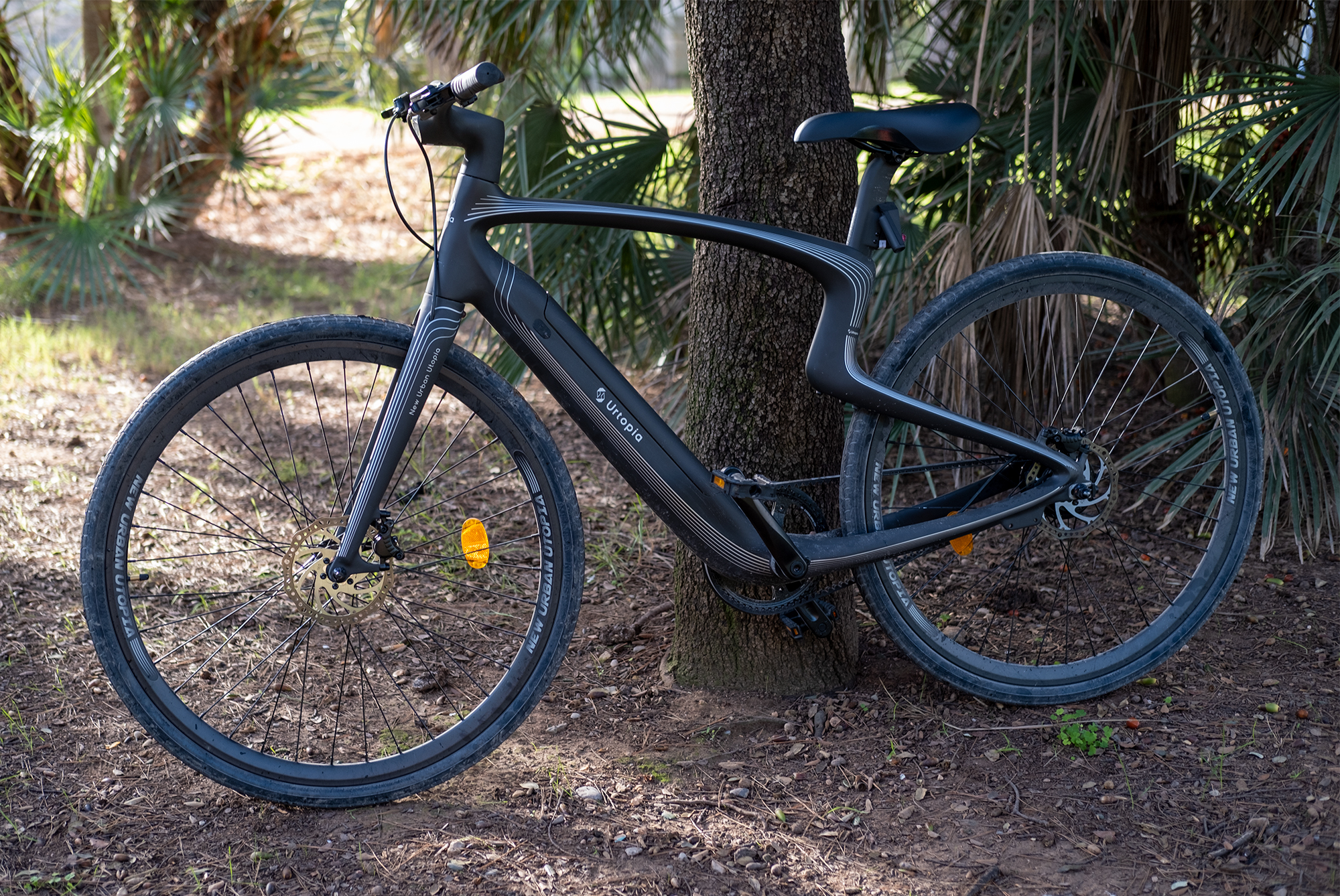 At the tail end of last year, a curious new entry into the ebike market emerged: Urtopia. The company’s mission seemed pretty clear, to make the most feature-rich, connected bike the world has ever seen. And with a built-in 4G SIM, WiFi, Bluetooth, GPS, a fingerprint reader and mmWave sensors for collision detection, it was likely accomplished. Except, the model we tested was a prototype leaving us unable to evaluate some of the more interesting features. Until now.

The retail version of the bike is almost identical to the pre-production version we tested at the end of last year bar a few minor cosmetic details. The D-pad on the left handle has been slightly redesigned and the fingerprint reader on the right is also now a button. The only other visible change is the dot-matrix display, which is now flat and easier to read.

Perhaps one of the main features we couldn’t test wasn’t available at all – the app. With so much going on in the bike, it’s more important to have a companion tool on your phone to confirm settings and to extract more use out of some of the sensors (ride tracking, for example).

All I’ll say is, the bike might be the final hardware, but the software side of things started out a little… less complete. But in the space of a few weeks, the app has been redesigned and there have been a couple of firmware updates for the bike itself and the experience feels much less like a work in progress.

But first a little reminder. The Urtopia bike is a fixed-gear (Gates carbon belt), single hub-motor ebike with three levels of speed assistance (20MPH in the US, 15MPH in Europe). The 30lbs/15Kg city bike offers approximately 60 miles of assistance out of the 360Wh battery. That’s a fairly common spec for an ebike, but one look at the Urtopia will tell you this isn’t really a normal bike.

Last time around I was able to test Urtopia’s cred as a general road bike, and despite a slightly stiff ride (there’s no suspension) it performed well, with smooth pickup from the torque-based motor. The voice control for changing speed, locking the bike and more was also fun but perhaps not the smoothest experience (and even if it were, I’m not sure we’re collectively ready to be speaking to our bikes in public yet).

The first thing I wanted to try here was the 4G connectivity. Utopia isn’t unique in having a cellular connection (newer VanMoofs, for example, also offer connectivity), but the 4G here is behind a few interesting features. For once, you’ll (theoretically) get a log of your ride in the app every single time you go out. I say theoretically as it often didn’t work for me. Then sometimes it did. I couldn’t quite pin down what caused it to work sometimes and not others, but I suspect it’s to do with whether you leave the bike in standby while at home, or if you power it down (thus fully resetting the sensors).

After one of the firmware updates this feature became more reliable. Which is good, because it was frustrating to put in double-digit miles only to come home and find your ride wasn’t logged. Right now, there’s not a lot you can do with the data other than see where you went and how fast in a slick animation. It, of course, logs all your miles and… as I went to check the app for what other data it records there was an app update (duration, calories, average speed and even CO2 saved is the answer). Right now, you can only share the rides with the in-app “community” but the option to share to services like Strava would be a real positive.

In a similar way, the app can also tell you exactly where your bike is at any time, as long as the battery is connected and has enough power to ping the network. It will stop working once the battery totally dies, of course, but if someone steals your ride, you should have plenty of time to ping it and locate it before they realize it’s the world’s most connected bike and what a fool’s errand stealing it was.

Another security feature is the fingerprint sensor. This was physically present on the prototype, but without the app, there was no way to set it up. It works surprisingly well and allows you to turn the bike on or to disable the alarm quickly. You can still ride the bike without assistance without unlocking the bike with your finger, but it’s effectively a cumbersome fixie at this point. Unless you turn the alarm on, then it’ll start sounding an alert at the slightest, and I mean slightest movement which can only be disabled with a registered digit.

One of the more intriguing additions to the Urtopia’s spec sheet are the mmWave sensors. These are designed to detect vehicles approaching from behind on either side. If something is detected, you’ll be alerted through a visual signal and vibrating handlebars. In practice, it’s a little hard to test without deliberately endangering yourself, but it does seem to work. Although, I am not sure whether, if faced with a truck coming up behind, you might be more distracted by the alerts than the traffic itself. That’s to say, this is clearly a valuable feature, but the outcome of it is hard to quantify at this time.

Something much easier to evaluate is the onboard navigation. Or rather, the ability to punch a destination into the app, and then have visual and audio turn instructions via the speaker and display on the handlebars. There are, of course, other ways to do this – either with a phone in a mount or maybe just in your pocket with audio instructions via headphones. But having it here right in the handlebars feels a lot more futuristic and means you don’t have to expose your phone to the elements/thieves.

The dot-matrix screen does have a bit of a retro vibe to it, and makes it feel a bit more like KITT (especially when it speaks to you). For the navigation, this works well enough as the arrows/directions are shown clearly enough that you can glance at them without being distracted.

Urtopia calls this screen and speaker combo the “smart bar” and it has other plans for it beyond serving up data and other visual feedback. One example is using the bike’s speaker as a Bluetooth speaker for music. This may have accidentally been my idea. I suggested it to them the first time we tested it, and now it’s part of the app. It’s kinda fun, though I have never felt quite so self conscious as I did riding through a busy park with phonecall-quality Drum & Bass playing from my bike. Podcasts might be a bit more its speed, but happy to see the feature here nonetheless.

There is… more. Another addition that was conceived after our initial testing is “game” mode. It’s not quite what you’re likely imagining. Or at least, what I was imagining. I assumed it might be some sort of virtual race where you have to “catch” up with a ghost rider like in a Mario Kart time trial. Or maybe some sort of way of making training/intervals fun? But no, it’s actually a game of Snake you can play on the display using the control buttons which, to be fair, are basically a D-pad. Obviously, not to be played while moving.

Perhaps the biggest chance since we last looked at the bike is the price. Now that the crowd-funding campaign is complete and the bikes are made and ready to ship, the $2,000 early-bird price has given way to the regular $2,799 retail price. That puts it in a similar category to something like the Cowboy C4 which has fewer high-tech features, but does have the important theft detection and locating capabilities.

All to say that, the Urtopia definitely has a lot of tech appeal, but it still feels like the software and features are settling into themselves. If they can continue to make that side of the experience as comfortable and as exciting as it is to ride, this will be a solid choice for those that want a capital-E e-bike.