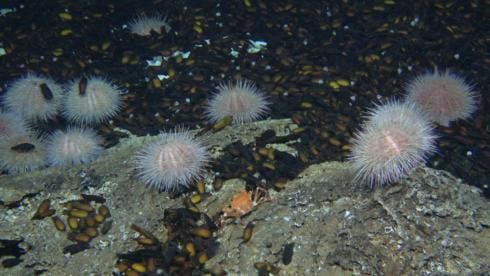 Past the turquoise surface waters of our oceans lies an entire ecosystem we have just begun to discover… and understand.

In an expedition off Israel’s coast that is part of a long-term collaboration among University of Haifa’s Leon H. Charney School of Marine Sciences, the Israel Oceanographic and Limnological Research, Ben-Gurion University of the Negev, and the Inter-University Institute of Marine Research, researchers set out to discover what secrets the deep ocean of this region held.

“The Eastern Mediterranean Sea experienced multiple climatic and anthropogenic changes at different time scales. Investigating the geological and environmental records concealed in this hotspot will provide a high-resolution record of the impact of changes on the deep sea, which is essential for understanding local and global climatic changes,” said the Charney School’s Dr. Yizhaq Makovsky, one of the initiative’s leading researchers.

One would think scientists would fully study this fragile habitat before possibly causing irreparable damage, but because the deep sea is so far away it’s almost an “out of sight, out of mind” conservation scenario. Unfortunately, not only is it one of our planet’s most sensitive areas when it comes to impact from climate change, it also suffers mounting deep-sea mining and fishing pressures. “The deep sea is the Earth’s climatic capacitor, mitigating short-term changes,” Makovsky said. “Once the impact of surface synoptic changes migrates to the deep sea, the entire climate of the Earth changes.”

The researchers believe that the Eastern Mediterranean Sea can be “regarded as an early-warning system for what we can expect from marine environments across the world.” Which is how the research team found themselves on a boat, on a mission to see whether this region was a desert or an underwater paradise.

It was the latter.

“This is a shocking revelation to those who are familiar with the Eastern Mediterranean, which was thought of as an ocean desert,” Makovsky explained.

Data revealed deep sea brine pools and a food web thriving on methane, including hundreds of deep-water sharks and a nursery that is home to the largest concentration of deep-sea shark eggs ever found according to the scientists. In fact, the hotspot could be the region’s largest mating location for these deep-sea sharks. “This was happening under our noses for thousands of years, right next to Tel Aviv, one of the largest cities in Israel,” said Makovsky. “It was hiding in plain sight, which highlights how little we know about the deep sea — not just off the coast of Israel, but around the world. This is a global challenge.”

Unfortunately, the species of shark is not known.

“These represent one of the most significant discoveries of marine habitats in Israel’s history,” the scientists commented in a press release. “We believe that our discovery of a previously unknown deep-sea hotspot of life could provide crucial information for the sustainability and resilience of the marine ecosystem not only in the Eastern Mediterranean, but also globally in other oceans.”

Denial of responsibility! TechCodex is an automatic aggregator of the all world’s media. In each content, the hyperlink to the primary source is specified. All trademarks belong to their rightful owners, all materials to their authors. If you are the owner of the content and do not want us to publish your materials, please contact us by email – [email protected]. The content will be deleted within 24 hours.
Climate ChangedeepseadiscoveryIsraelMediterranean SeaNatureoceanshark
0
Share

Shang-Chi Was Inspired By Jackie Chan, Ip Man, And Good Will Hunting