President Donald Trump looked to chip away at rival Joe Biden’s support with African-American voters Friday, telling a crowd in Atlanta “Biden doesn’t know Black Americans like I do,” and insisting Democrats will take their vote for granted. (Sept. 25)

President Trump’s decision this week to expand a ban on “divisive” and “un-American” diversity training to federal contractors is roiling the private sector, with companies fearing the White House order will deal a crippling setback to their efforts to increase workplace equality and address race and gender disparities.

“The biggest challenge right now is the confusion, chaos and the uncertainty of not knowing what this means,” said M.E. Hart, an attorney and diversity, equity and inclusion expert who runs training sessions for businesses and federal agencies. “My concern is that it will stop these efforts for months and may have a chilling effect on the momentum in businesses and organizations.”

Race in America: Why are there still so few Black executives?

Black employees ask: Do we matter to corporate America?

The announcement just weeks before the November election runs counter to the policies of many American companies as well as state and local government agencies that mandate diversity, inclusion and equity training sessions for employees.

Corporations in every sector from technology to financial services are reviewing training materials, diversity consultants say. Some are pausing training sessions to make sure they comply with the executive order before it takes effect in November. Particularly worried are businesses heavily dependent on government contracts such as defense contractors.

Behind the scenes, individual companies and industry groups are supporting efforts to mount a legal challenge to the executive order, similar to industry opposition to the president’s Muslim travel ban.

“This is an incredible opportunity for the business and financial communities to push back against these obvious plays at white supremacy,” said Aubrey Blanche, global head of equitable design and impact at high-tech firm Culture Amp. 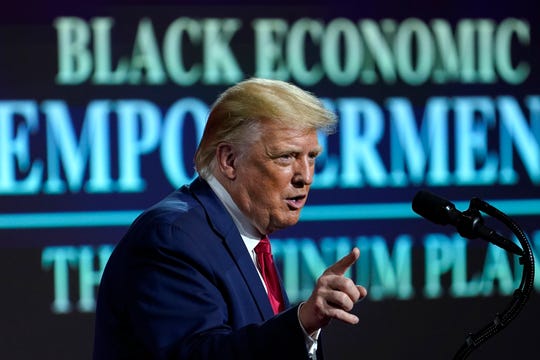 The nation’s largest companies issued statements in support of the Black community and made fresh commitments to racial justice, an unprecedented outpouring after decades of corporate silence.

The Executive Order on Combating Race and Sex Stereotyping targets workplace training that is “rooted in the pernicious and false belief that America is an irredeemably racist and sexist country.”

The executive order cited a recent seminar at the Treasury Department that argued “virtually all White people, regardless of how ‘woke’ they are, contribute to racism” and training materials from Argonne National Laboratories in Chicago, which said racism “is interwoven into every fabric of America.”

Rufo celebrated achieving his goal – “…persuading the President of the United States to abolish critical race theory in the federal government” – posting on Facebook moments after Trump issued the order: “The president has effectively declared war on critical race theory – and extended the battlefield to all of our major institutions….he has used all of the mechanisms of power to destroy the anti-American ideology of critical race theory – and immediately takes the fight to the bureaucracy, woke corporations, and universities.”

The Labor Department’s Office of Federal Contract Compliance Programs will launch a hotline to report government contractors not following the order.

Stakes are high for contractors who could lose out on lucrative deals if they run afoul of the executive order, government contracts attorneys say.

“This has caused quite a bit of curiosity, fear and consternation amongst my clients,” said Franklin Turner, a partner with law firm McCarter & English who represents multinational contractors and small and medium-sized companies. “Companies have an obligation to ensure equality in terms of affirmative action requirements so most companies engage in this type of training to try to create an inclusive welcome environment for everybody.”

Turner says he’s read hundreds of executive orders over the years and has never encountered one like it.

“It’s clearly in my view something that is coming out because of this notion that it might perhaps help the president galvanize a certain segment of his core supporters. That is not how these things should typically work,” he said. “There’s also some sense that perhaps if we are looking at President Joe Biden come January 2021 that these requirements might go away as quickly as they have emerged.”