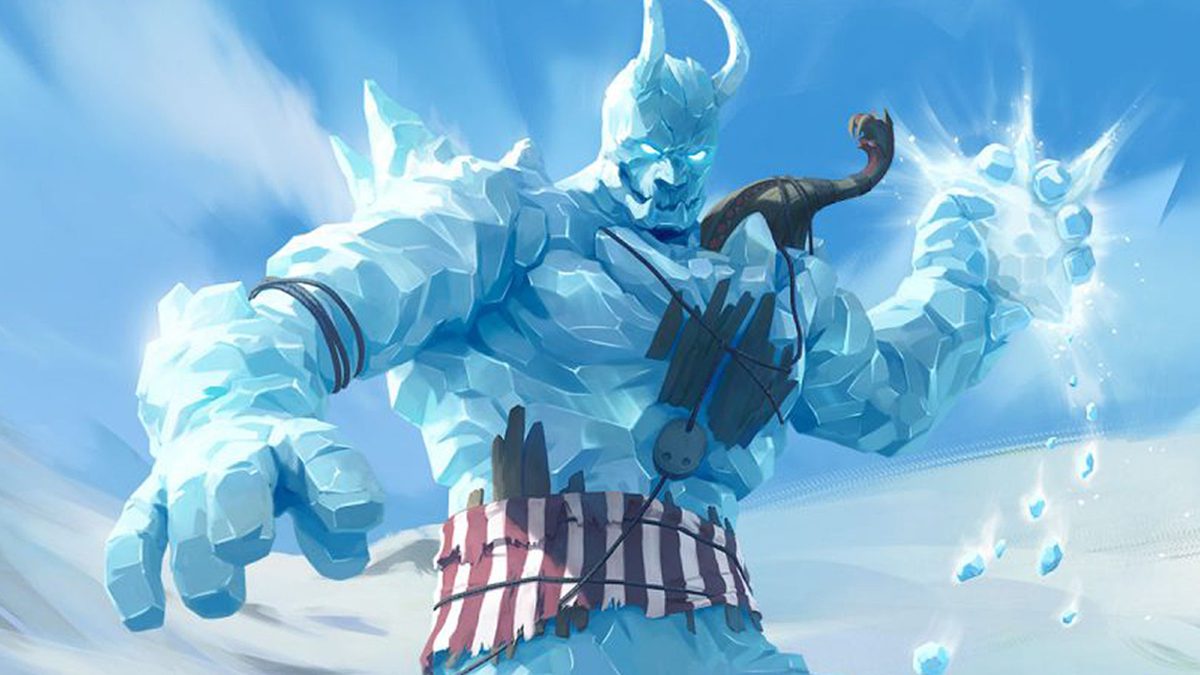 If you took Torchlight, mixed in a heaping helping of Norse mythology, and topped it off with the looming apocalypse countdown from The Legend of Zelda: Majora’s Mask, you’d have something that looks a fair bit like Tribes of Midgard. This fast-paced, colorful action RPG doesn’t give you a lot of time to breathe and explore its exciting world when you’re racing against time. But when you work together with friends to overcome its challenges, that tension can be rewarding.

There are two distinct ways to play Tribes of Midgard, and both revolve around protecting a seed of the World Tree at the center of an upgradeable settlement. Endless mode just lets you see how long you can last against infinitely increasing waves, but it’s the less interesting of the two. I’ll mostly be talking about the story-based Saga mode, in which you have about two hours to complete a set of objectives and defeat a final boss before an endless winter overtakes the map and renders it uninhabitable.

By day, you’ll roam around a set of diverse and increasingly dangerous areas completing simple quests, levelling up, and gathering materials and souls to upgrade your gear and your settlement. The quests themselves are pretty straightforward and predictable: Go kill something, bring me some items, clear out a mini dungeon. The satisfying combat holds this all together, but Midgard soon reveals itself to be more of a time management game than anything. Get as much done by the light of day as you can, because every night you’ll have to warp back to your settlement to defend it from the minions of Hel. Given how diverse, detailed, and intriguing the world can be though, I often found this hindered my ability to really explore and enjoy it.

Throwing a comically oversized wrench into this routine are the lumbering jotnar, who will appear from time to time at the edges of the map and slowly plod toward your village. They’re not the most challenging bosses in the world, with slow and obvious attack animations that are fairly easy to avoid. But their massive health pools present a strategic challenge: waiting too long to take them out might mean you can’t topple them in time before they wreck your base. Of all the tribulations Tribes of Midgard sent my way, these were probably my favorites.

The issue is, even though single-player is listed as a feature on Steam, this is all just too much to keep up with by yourself. Tribes of Midgard is very clearly intended to be a co-op game, and it definitely works much better when you can get a big squad of up to ten vikings together with a clear plan and good communication. But alone, it feels like if I’m not sprinting from objective to objective with the efficiency of a speedrunner, there’s no way I’m going to be able to finish everything before the Fimbulwinter sets in. Being able to increase the time available before the Apocalypse in solo mode would make it much more enjoyable, since certain things like gathering speed don’t scale when you’re alone.

On your way to doomsday, you’ll have to personally harvest a lot of resources like wood and stone that can be used to build new base structures, upgrade defenses, and level up your NPC crafters. This is an interesting resource management layer, but it often felt like a lot of the upgrades weren’t worth my time. Since certain materials like stone are so rare, if I spent them to strengthen my base rather than on critical objectives like repairing the bridge to a boss area, it seemed like I was setting myself up for failure. Especially in a group, it seemed easier to just defend the base ourselves and save on materials.

Woe to the Vanquished

The indignity of losing your Tree or freezing to death is mitigated a fair bit by the fact that you still earn profile XP and account-bound currency based on how many days you survived and how many bosses you killed, even if you die or have to abandon a session. You can also unlock new character classes by completing certain achievements. Eventually you can earn the ability to start with better gear or more resources, but the benefits for grinding out profile levels drop off after a while since you’ll mostly be unlocking side-grades and crafting recipes, where I would have liked to see some even stronger starting gear for all that time investment.

At least new playstyle options offer some incentive to keep at it. The starting Warrior is a good all-arounder with an upgraded dodge roll that will let you avoid trouble. I really liked the Berserker, who does more damage the longer she stays on the attack. And you can open up some really nice synergies later on with support classes like the Warden, who can decrease crafting costs and teleport back to base on a reduced cooldown.

I should also mention that there is a premium currency you can buy with real money, but it’s only used for cosmetic items, there are no randomized loot boxes or gambling elements, and you can unlock everything without paying other than the Deluxe Edition exclusive cosmetics.

Tribes of Midgard is a cooperative survival game in which players work together to resist the oncoming invasion of Giants during Ragnarök. Set in a procedurally generated world full of dark creatures, hidden gods and abundant materials to be uncovered, play together as a Viking clan living in a village that harbours the Seed of Yggdrasil; a tree that holds the promise of everlasting life.
<p>
Explore the wilderness to craft new weapons and be prepared to protect the delicate tree of your village from the grim shadows that prey upon its power. All the while, a Giant of Jotunheim stalks ever closer to your village, seeking to destroy Midgard and fulfill the prophecy of the end of the world.