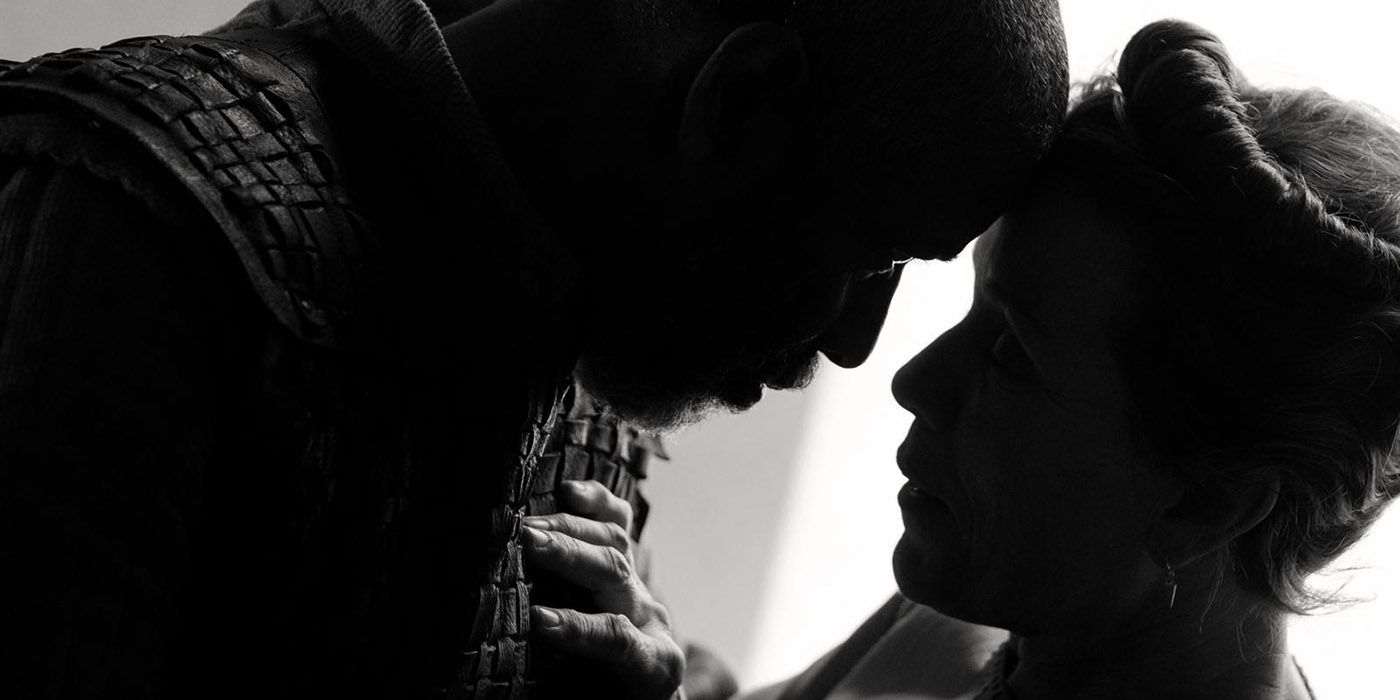 Our first look at one of the most highly anticipated films of the year has arrived: The Tragedy of Macbeth. The film is an adaptation of the William Shakespeare play of the same name, but it’s written and directed by Joel Coen. This is Coen’s first solo outing in the feature film world, as he of course traditionally writes and directs all of his films with his brother Ethan Coen. But for Macbeth, Ethan was reportedly just “not interested,” and Joel forged ahead solo.

A work of stark chiaroscuro and incantatory rage, Joel Coen’s boldly inventive visualization of The Scottish Play is an anguished film that stares, mouth agape, at a sorrowful world undone by blind greed and thoughtless ambition. In meticulously world-weary performances, a strikingly inward Denzel Washington is the man who would be king, and an effortlessly Machiavellian Frances McDormand is his Lady, a couple driven to political assassination—and deranged by guilt—after the cunning prognostications of a trio of “weird sisters” (a virtuoso physical inhabitation by Kathryn Hunter). Though it echoes the forbidding visual designs—and aspect ratios—of Laurence Olivier’s classic 1940s Shakespeare adaptations, as well as the bloody medieval madness of Kurosawa’s Throne of Blood, Coen’s tale of sound and fury is entirely his own—and undoubtedly one for our moment, a frightening depiction of amoral political power-grabbing that, like its hero, ruthlessly barrels ahead into the inferno. An Apple/A24 release.

While Roger Deakins traditionally shoots most of the Coens’ films, he was unavailable and thus Inside Llewyn Davis and Ballad of Buster Scruggs cinematographer Bruno Delbonnel shot The Tragedy of Macbeth. This is Joel Coen’s second time opening the NYFF, as the Coen Brothers film Miller’s Crossing was the opening night film in 1990.

“The New York Film Festival is a place where I’ve been watching movies as an audience member and showing them as a filmmaker for almost 50 years,” said director Joel Coen. “It’s a real privilege and a thrill to be opening the Festival this year with The Tragedy of. . .”

“We can’t wait to welcome New York Film Festival audiences back to Lincoln Center this fall, and what a way to do that!” said Eugene Hernandez, Director of the New York Film Festival. “With Joel Coen, Frances McDormand, Denzel Washington, and our friends at Apple and A24 on Opening Night at Alice Tully Hall, we’re setting the stage for a momentous return to our roots. Last year was a deeply meaningful edition of NYFF; our Festival traveled to Brooklyn, Queens, the Bronx, and around the country via our Virtual Cinema. This year we’re back in our Upper West Side home, but you’ll also find us exploring new venues and ways to connect with moviegoers in person, outdoors, and online—stay tuned!”

“We’re proud to open the festival with a film that immediately joins the ranks of the great screen Shakespeares,” said Dennis Lim, Director of Programming for the New York Film Festival. “Working with brilliant collaborators, including Denzel Washington and Frances McDormand in stunning form, Joel Coen has made an inspired and urgent interpretation of an eternally relevant classic, a moral thriller that speaks directly to our time.”

The Tragedy of Macbeth doesn’t yet have a release date for general audiences, but it’s set to first hit theaters courtesy of A24 followed by a streaming release exclusively on Apple TV+.

Naturally, the series is classified as a psychological thriller.

Ripple Effect on bringing mod tools to Battlefield 2042 with Portal, juggling all that content, and what the future holds

Olympics opening ceremony: start time and how to watch live

Dexter Season 9 Ending Will Blow Up The Internet, Says Showrunner

‘World Of Warcraft’ dev says “no…

Dexter Season 9 Ending Will Blow Up The Internet,…