Titans: 10 Things To Notice In The New Trailer 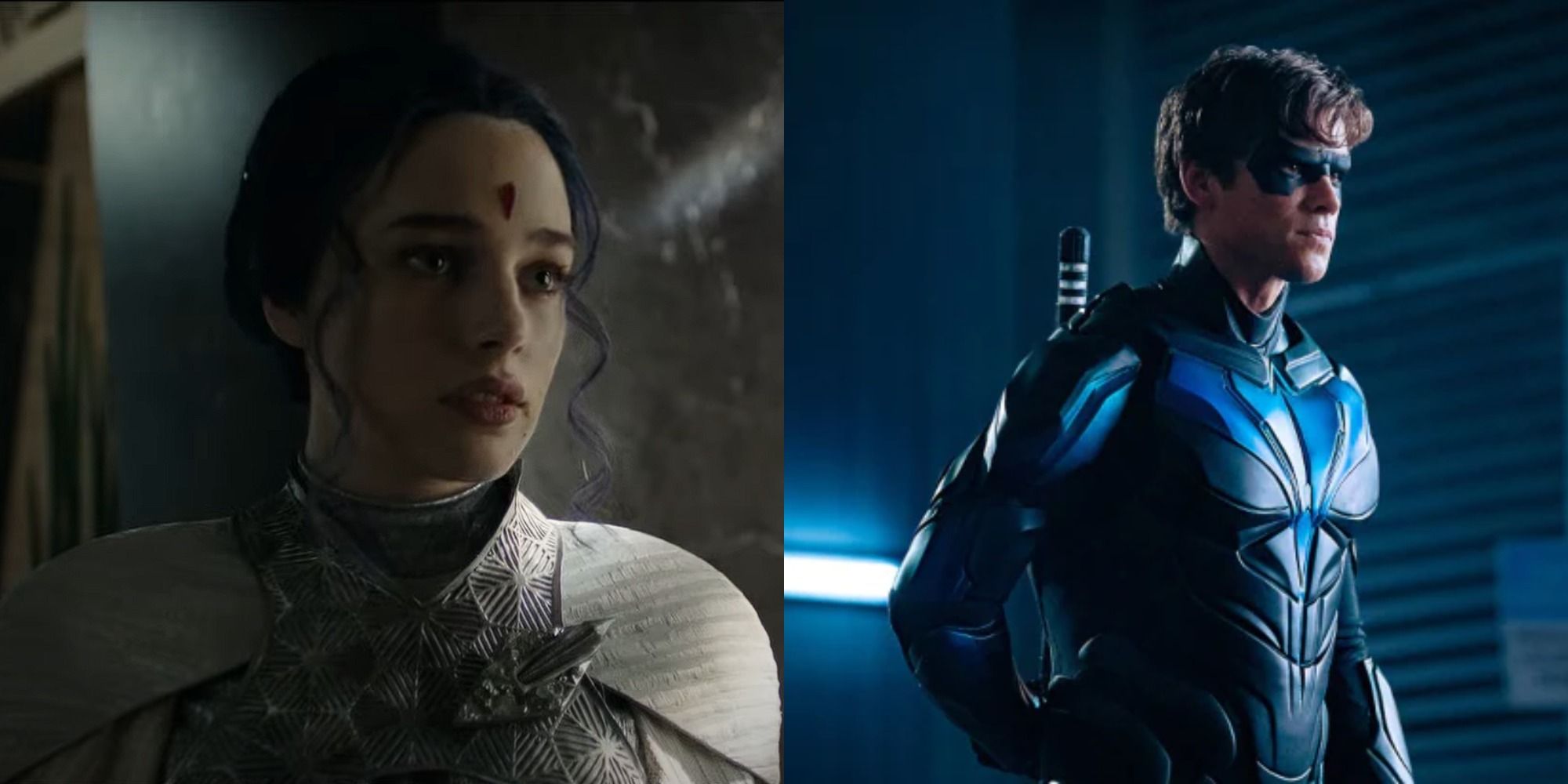 Titans season three is coming to HBO Max in August 2021. Only a few promo shots and a teaser trailer have been released so far, leaving fans yearning to learn more about the upcoming season.

The cast and crew of Titans have been fairly tight-lipped about the forthcoming season. Luckily for fans, DC has decided to increase the hype for the show by finally releasing a full-length trailer. While trailers for television shows often tease rather than fully reveal what will occur, there are a few important things that seem to point to what might be happening in the third season of Titans.

The new trailer includes some moments that were already released in the teaser like Jason Todd encountering someone who has been exposed to the Joker’s lethal toxin. This trailer takes it further, with the news announcing that “an ally of Batman has been found dead.”

It is well known in the DC Universe that just because a character is said to be dead, it doesn’t mean that they stay dead for long. In the comics, Jason does actually die at the hands of the Joker, but in the video game Batman: Arkham Knight, Batman just thinks he dies. So far there is no hint about which direction the show will take, but it is now confirmed that part of Jason’s Red Hood transformation will include his death, real or staged.

9 Raven Gets A New Outfit

Raven is known in both comics and TV shows for her dark clothing so it was surprising to see Rachel in a new costume of silver and white in the newest trailer. She comes back from Themyscira looking more mature and confident.

The outfit is a nod to The New Teen Titans comic series, which depicted Raven adopting a similar silver and white costume after she had defeated her evil father Trigon. The new outfit symbolized Raven’s transformation from a victimized teenager to a confident woman who has literally conquered her inner demons. It looks like something similar happened to Rachel, who has mastered her power and become accepted into the community of warriors on Themyscira.

In the comics, Batman is emotionally despondent when Jason Todd is murdered. It is not entirely clear in the trailer what has happened to him, but Bruce is shaken up enough to abandon his superhero identity. He tells Dick Grayson that he is through with being Gotham’s primary guardian and that his adopted son will “be a better Batman.”

Fans have already begun to speculate what causes Bruce to reject his former superhero life. The theories range from Bruce killing the Joker, putting the Clown Prince of Crime in the ICU, or unintentionally killing Jason. No matter how the storyline plays out, Bruce most likely won’t quit being Batman for good as Tim Drake is scheduled to arrive as the third Robin this season.

There is a brief scene shown of Garfield pulling some awesome moves while kicking a bad guy in the face. The most notable part, however, is that he appears entirely in green. Gar isn’t transformed into an animal in the scene; it’s just his skin color that has changed.

Hopefully, this means Beast Boy gets to actually be Beast Boy, not Tiger Boy, as some fans have deridingly called him. The Titans audience has regularly expressed a desire to see Gar get more character development to allow for more animal transformations. By showing Gar in his comic book-accurate form, the trailer promises a fully-powered Beast Boy will finally emerge this season.

It was previously revealed that Barbara Gordon will be in a wheelchair when she is introduced this season. It was unclear if this was a reference to her Batgirl career ending in a tragedy like in The Killing Joke, or if they will give a different reason.

The new trailer has revealed that Barbara knows Batman’s secret identity, which suggests she was Batgirl in the past. In addition, Barbara is shown telling her ex-lover Dick Grayson about their consultant, Scarecrow, and sharing information on the Red Hood case. Titans showrunners have hinted that Barbara will be anti-vigilante, but it seems that won’t keep her from working with Dick to stop the Red Hood.

5 Dick’s Time As Robin Is Explored

The first seconds of the trailer is a scene of a boy running through a forest, with Dick’s voice stating that Batman left him out there all alone. Later, the trailer shows a now grown-up Nightwing in that same forest. It looks like this season will be delving more into some of the training and trauma Batman put Dick through as a child.

RELATED: Every Bat-Family Member In Titans

Scarecrow’s fear toxin is made to exploit fears and traumas his victims already possess. With his return to Gotham and his obsession with his traumatic time as Robin, Nightwing is a prime target for the villain. The teaser trailer previously hinted at the use of fear toxin, so it is likely that Scarecrow is orchestrating an upheaval from his cell to strike at Nightwing.

Several of the scenes in the trailer are set in Wayne Manor. It looks as though the Titans are living there during their time in Gotham. It makes a great home base for the team and gives them access to all the technology that Bruce keeps in his Batcave.

If the team is staying in the Manor, it is very likely fans will see more of the household and the Batcave than the small glimpses that were shown in previous seasons. Gotham is going to feature heavily in the new season, so it makes sense that the Bat-Family’s home will be a prominent setting.

At the end of season two, Donna Troy was dead and being taken back to Themyscira. Raven went with her to learn how to better control her powers. Raven also believed that if there was any hope of bringing Donna back to life, she would be the one to do it.

There is only the smallest glimpse of a confused Donna in the trailer, but it most likely means that Rachel succeeding in bringing her back to life. There is a possibility that she is suffering from amnesia or is kept from interacting with the other Titans, which might be why she looks so confused.

In the comics, Tim Drake is an intelligent kid with superior detective skills. He deduces Batman and Robin’s identities long before he becomes Robin. Tim is also the one that realizes Batman needs a Robin by his side to stay stable.

The trailer shows him more upset than his family when he hears the news of Jason’s death. Jason’s emotional reaction indicates the depth of his involvement with his teammates. They are more than just friends to him; they are family that he deeply cares about. Tim Drake’s storyline has lots of potential in this new season and fans hope the writers will prominently showcase the character.

1 Titans Are Actual Superheroes This Season

The last two seasons have shown the Titans either on the run or actively defending themselves from Deathstroke and Cadmus. The team hasn’t had much chance to do any true superhero work. That appears to change in the third season.

The trailer shows Nightwing walking into a crime scene and not being turned away by police. In another scene, Dick tells Barbara that the Titans can fill in for Batman while the Caped Crusader is away. It looks like the team will finally get to do some crime-busting and life-saving in this season rather than fighting in the shadows or being hunted by assassins. By defending Gotham and working together, the Titans promise to finally emerge as full-fledged superheroes in season 3.


Next
Big Brother: 10 Most Surprising Romances From The Reality Series, Ranked

Erynn Reimer is a list writer for Screen Rant in love with all things story telling. Despite discovering comics a little later in life than most people, they are one of her passions, with a special a soft spot for all things bat family. Erynn is a content creator, blogger, and an aspiring novel writer.

Erynn writes at home, piled under three kids, a dog, a cat, and an exasperated husband.