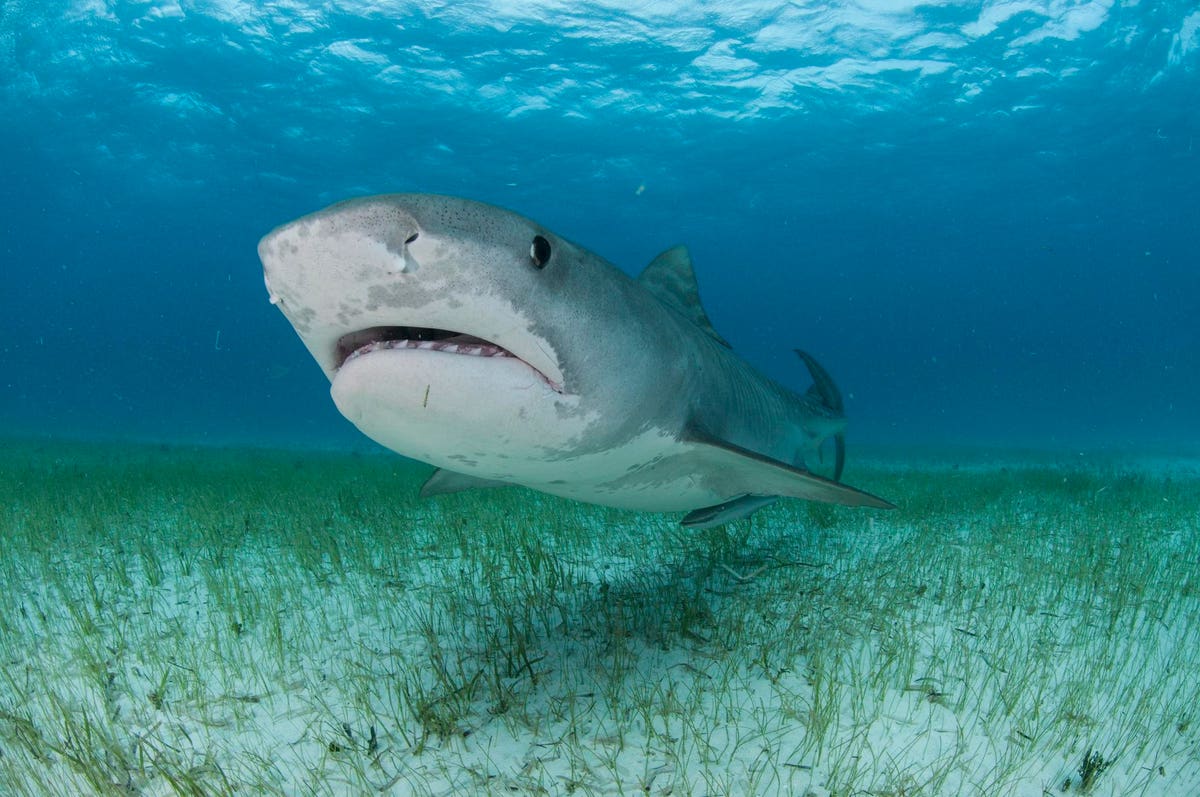 “That’s the last one!” a voice called over the lapping of the ocean waves against the hull of the boat. He was referring to the biologging camera tag – one of seven – attached to the enormous tiger shark (Galeocerdo cuvier) that was being prepped for release. Sweat beaded across the foreheads of the scientists as they high-fived one another, exhausted from both the hard work and the Bahamian sun. Rocking gently in the turquoise waters over the Great Bahama Bank, the boat tilted to the side as everyone leaned over to unhook the shark and watch her swim away into the blue.

Little would they know she would help lead the team to one of the biggest marine discoveries in the world.

While reviewing the footage from these camera-equipped tiger sharks throughout the Bahamas, Dr. Austin Gallagher, founder of the non-profit ocean research organization Beneath the Waves (BTW), learned that these sharks were spending significant time in seagrass habitats. Common in tropical and sub-tropical waters throughout the world, tiger sharks tend to be the largest shark species patrolling this Caribbean region. With 16 major islands, The Bahamas is home to colorful corals and a host of marine plants and animals.

One of these plants is the humble seagrass. These grass-like meadows are vital part of the marine ecosystem due to their productivity level and how they provide food, habitat, and nursery areas for numerous vertebrate and invertebrate species. It’s only been the last few years that these areas have been highlighted for their importance, especially when it comes to combatting climate change due to their ability to capture large amounts of carbon through photosynthesis and safely store it in their deep root systems within the seafloor. “Seagrasses trap and permanently store massive amounts of carbon in the sediment, contributing an estimated 17% of the total organic carbon annually buried in marine sediments,” the authors of the new paper explain. “Rapid seagrass losses over previous decades have reduced the sequestering capacity of seagrass ecosystems, while also releasing large amounts of carbon to the atmosphere. Hence, the conservation of seagrass ecosystems is of critical global importance to manage greenhouse gas emissions while safeguarding the many threatened species and seafood resources supported by seagrass habitat.”

Those tiger sharks Gallagher and his team tagged? They led the scientists towards the monumental finding of 92,000 km2 (35,521 square miles) of these beds with each tailbeat. This makes it one of our planet’s most significant global climate assets – the world’s largest seagrass ecosystem! The team could hardly believe what they had stumbled upon, as seagrass meadows have remained poorly mapped across many regions, such that current uncertainty surrounding estimates of global seagrass extent ranges 10-fold. “This knowledge gap is a major reason why seagrass ecosystems remain underrepresented in marine protected areas, and therefore, highlighting a clear a focus for the UN Decade of Ocean Science,” the authors state.

There is no denying that the ocean is critical in mitigating the effects of global warming, says Gallagher: “What this discovery shows us is that ocean exploration and research are essential for a healthy future. The untapped potential of the ocean is limitless. Further, this discovery underscores the role that science can play in developing resilient communities. And we knew that with a discovery of this magnitude, we needed to bring in the world’s best storytellers: SeaLegacy.” BTW has now teamed up with co-founders of the organization (Cristina Mittermeier, Paul Nicklen, and Andy Mann) on a multiyear journey to explore and document these vital wild ecosystems, and the important linkages between protecting seagrass habitats and safeguarding our own future on this planet.

The ocean and our planet are interconnected species of plants and animals working together to create environmental balance. Tiger sharks and seagrass are two very important species that will help us better understand and respond to climate change.

Denial of responsibility! TechCodex is an automatic aggregator of the all world’s media. In each content, the hyperlink to the primary source is specified. All trademarks belong to their rightful owners, all materials to their authors. If you are the owner of the content and do not want us to publish your materials, please contact us by email – [email protected]. The content will be deleted within 24 hours.
BahamasBlue Carboncarbon sinkCaribbeanGaleocerdo cuvierseagrassseagrass meadowsshark
0
Share

Elon Musk is officially the CEO of Twitter (for now)

How to recover deleted playlists on Spotify