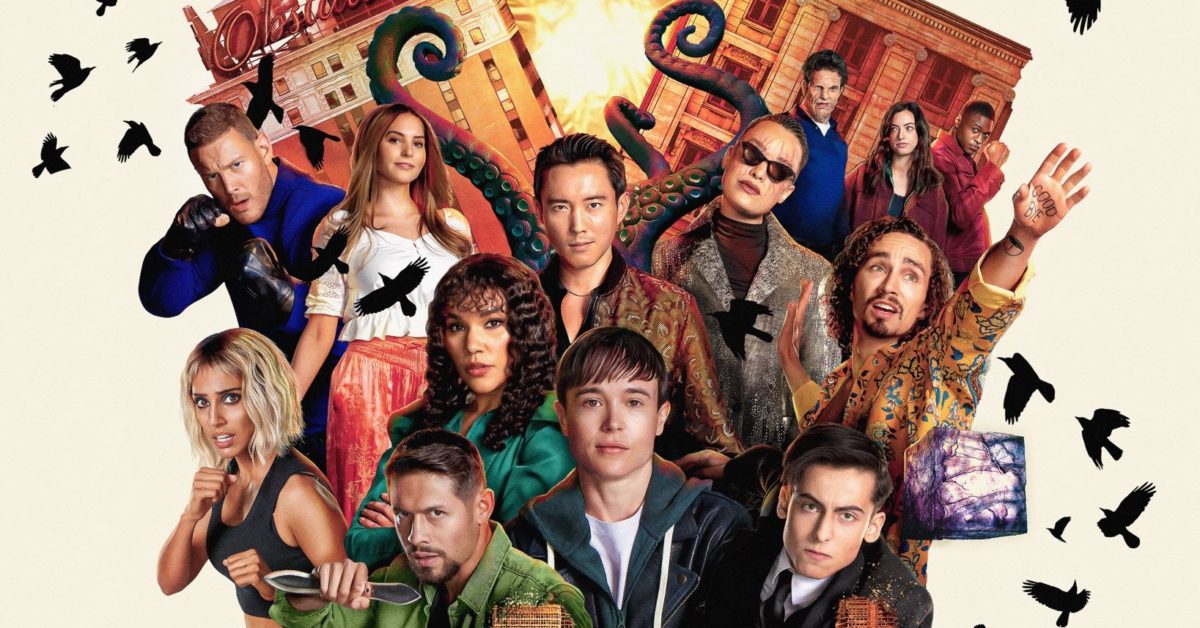 If it was any other Wednesday, then Disney+’s Ms. Marvel and Star Wars: Obi-Wan Kenobi would be getting all of our attention (especially with the latter’s finale hitting). But this isn’t any other Wednesday, because today brought us the third season of Netflix’s series adaptation of Gerard Way & Gabriel Ba‘s The Umbrella Academy. And all is right with the world… at least for a second or two. So to celebrate (and with our review hitting at the end of this week), we not only have the final key art poster for the show’s return but also a look at Elliot Page‘s (Viktor Hargreeves) late-night visit only hours ahead of the season’s debut. But first, check out the cool new artwork below:

And in the following clip from Late Night with Seth Meyers, Page stops by the Seth Meyers-hosted NBC late-night talk show to not only discuss the highly-anticipated third season but also what it likes starring in a global streaming sensation, how he incorporated his journey with transitioning into Viktor Hargreeves, and how learning to embrace joy has made him a better actor (with a preview of TUA S03 starting off the segment within the first few seconds):

Here’s a look at the panel presentation from Netflix’s Geeked Week, with the Sparrow Academy preview at around the 5:00 mark:

After putting a stop to 1963’s doomsday, the Umbrella Academy return home to the present, convinced they prevented the initial apocalypse and fixed this godforsaken timeline once and for all. But after a brief moment of celebration, they realize things aren’t exactly (okay, not at all) how they left them. Enter the Sparrow Academy. Smart, stylish, and about as warm as a sea of icebergs, the Sparrows immediately clash with the Umbrellas in a violent face-off that turns out to be the least of everyone’s concerns. Navigating challenges, losses, and surprises of their own – and dealing with an unidentified destructive entity wreaking havoc in the Universe (something they may have caused) — now all they need to do is convince Dad’s new and possibly better family to help them put right what their arrival made wrong. Will they find a way back to their pre-apocalyptic lives? Or is this new world about to reveal more than just a hiccup in the timeline?

The Umbrella Academy stars Tom Hopper as Luther aka Spaceboy aka Number One, David Castañeda as Diego aka The Kraken aka Number Two, Emmy Raver-Lampman as Allison aka The Rumor aka Number Three, Robert Sheehan as Klaus aka The Séance aka Number Four, Aidan Gallagher as Five aka The Boy, Justin H. Min as Ben aka The Horror aka Number Six/Ben aka Sparrow Number 2, Elliot Page as Viktor aka The White Violin aka Number Seven, Colm Feore as Sir Reginald Hargreeves, and Ritu Arya as Lila. And speaking of the Sparrow Academy, we also have Justin Cornwell as Marcus aka Number One, Britne Oldford as Fei aka Number Three, Jake Epstein as Alphonso aka Number Four, Genesis Rodriguez as Sloane aka Number Five, Cazzie David as Jayme aka Number Six, and Existential Dread Inducing Psykronium Cube as Christopher aka Number Seven. In addition, Javon Walton (Euphoria, Utopia) has joined the cast in an undisclosed role. And (of course) Colm Feore as Sir Reginald Hargreeves.