The One Is Now A Villain (Controlled By Machines) 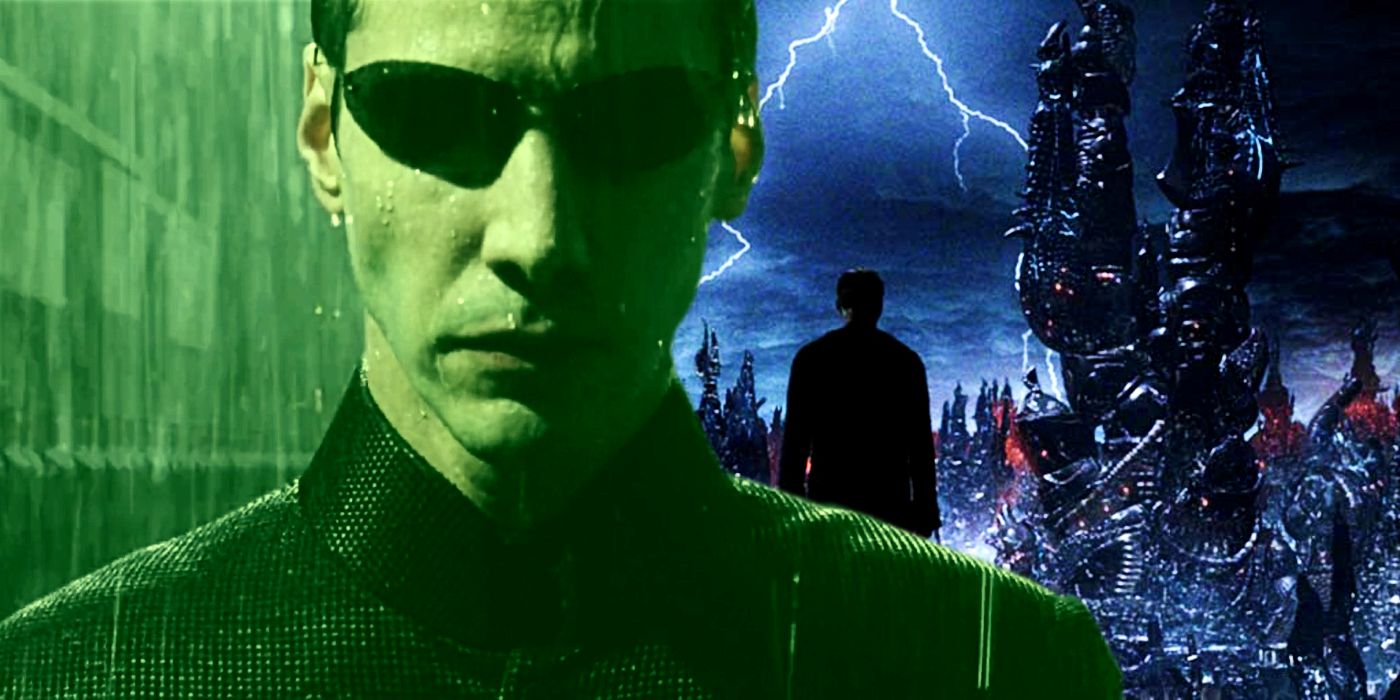 Neo is back in The Matrix 4, but has The One been turned into a villain by the dastardly Machines? At the turn of the millennium, Keanu Reeves spent 3 movies establishing himself as a classic sci-fi protagonist via the role of Neo – a seemingly ordinary man plucked from a mundane existence to serve as humanity’s champion in a fight against sentient machine oppressors. Luckily for him, Neo isn’t going up against this army of evil robots unarmed. In the finale of 1999’s The Matrix, Neo is revealed as The One – a chosen human of prophecy boasting near-unlimited power within the Matrix (and a few abilities in the real world too).

Keanu Reeves will return alongside Carrie-Anne Moss (Trinity) in Lana Wachowski’s forthcoming The Matrix 4, rumored to be titled The Matrix Resurrections. Given that both perished during the final act of the original trilogy, the mechanics behind Neo and Trinity’s return remain a mystery. We also have no clue why the pair have been revived, who they’ll be fighting, or even which side they’ll be fighting for. With so much still to be confirmed, all possibilities remain open – and one idea fans keep revisiting is how Neo could actually become The Matrix 4‘s villain.

Audiences are so accustomed to seeing Reeves as The Matrix‘s noble savior, to turn him bad would be wonderfully subversive. Obviously, Neo won’t suddenly decide that the Machines were right after all and humanity deserves to be destroyed, but he might become a villain if an outside force is pulling the strings. An outside force such as Machine leader, Deus Ex Machina, perhaps?

The One’s Original Purpose Is Obsolete

The One was designed by the Machines after several early Matrix builds proved unstable. As per The Oracle’s advice, The One served to embody all the subversion, rebellion and suspicion humans harbored over the Matrix’s virtual world, thereby allowing the program to run smoothly in cycles. The One’s responsibility was to reset the Matrix and destroy Zion each time humanity developed to a specified level. By picking “option B,” Neo breaks this pattern of death and deceit and creates a very different Matrix in the finale of The Matrix Revolutions. As The Oracle, Seraph and Sati enjoy the sunrise, it’s revealed that humans will be allowed to unplug from the Matrix, but the rules of this new world are never explained. For example, is there still a One in this latest reboot?

If each Matrix version comes with its own version of Neo, it’s reasonable to assume that a fresh One has been created in the simulation glimpsed during the trilogy’s ending. If so, this hero would have no purpose. What’s the use in sponging up every ounce of human subversion when humans are free to cancel their Matrix subscription whenever they choose? The Matrix 4 could introduce a One obsolete from birth, with no purpose or function. And a One without purpose or function is open to manipulation and corruption from those with less-than-noble intentions.

After the original Matrix trilogy concluded, the story was continued in video game form by The Matrix Online which, at the time, was presented as franchise canon. Naturally, The Matrix 4 isn’t obliged to keep that promise (although the absence of Laurence Fishburne certainly suggests it might), but The Matrix Online does tease a potentially dark future for Neo. One of the game’s best storylines sees Morpheus fighting to retrieve Neo’s body from Machine City, but his shiny former foes are staunchly refusing to cooperate. Morpheus ultimately dies for this cause, which proves getting Neo’s body back was about more than just respecting a friend, and the Machines’ reason for keeping Neo wasn’t just to watch Morpheus get riled up.

The Matrix 4 can borrow some of these ideas. Neo’s physical vessel was last seen being carried away in Machine City (Trinity’s was there also, curiously enough), so even without taking game canon into consideration, there’s a question mark over what happened to Neo next. Keeping Neo’s corpse to hand (or, indeed, to tentacle) could even be how the Machines rewrite their One program for the new, liberated Matrix. Not entirely dissimilar to John Connor reprogramming Arnold Schwarzenegger to protect his younger self, the Machines might use Neo’s body as a conduit for an updated One code written with an entirely different purpose in mind.

There are two reasons The Matrix‘s robots might seek to do this. Firstly, Neo’s powers transcend the Matrix and bleed into the real world by the trilogy’s end, making his corpse a rather valuable commodity. Secondly, the inevitable exodus from the Matrix would prevent the Machines from simply picking another human candidate to carry The One’s code, forcing the villains to recycle Keanu Reeves instead. Though it’s impossible to rule out the Machines reviving Neo’s body, why would they go to such lengths?

The One Can Circumvent The Truce

In the closing frames of The Matrix Revolutions, it’s fairly obvious that The Architect is unhappy about being forced to set humans free, and his creators must feel the same way. Despite their displeasure, it’s not a Machine’s nature to lie. This would be a terribly human thing to do. Deus Ex Machina is left with two choices, then – either wait for mankind to attack first, or exploit a technicality in his agreement with Neo. Assuming the Machine controller opts for the latter, the best way to cheat Neo’s truce would be turning mankind’s best weapon (The One) against them. After all, The One is still a human, even if he’s carrying a code written by Machines. The Machines themselves can’t, strictly speaking, be held responsible if Neo switches sides.

Seizing control of The One, the Machines could sit back and watch humanity destroy itself without directly getting involved, adhering to The Architect’s promise that his species wouldn’t break the peace. Nudging someone else to break it doesn’t count. But how much of The One’s programming would need to be altered in order to turn Neo against his own people? Not as much as you might think…

Related: The Matrix: Cypher & Mouse’s Ears Bleed In The Real World – Why?

Neo Might WANT To Turn Bad (Because Of Bluepills)

There’s a recurring Matrix 4 theory claiming that Bluepills (like Cypher from the original film) could play a major role in the franchise’s future, and this makes perfect sense. Bluepills are freed humans who long to be plugged back into the Matrix, happy to be used as a Machine energy source in exchange for a blissful dream. Since more humans are getting released after The Matrix Revolutions, it’s only logical to expect a groundswell of Bluepill rage among Zion’s population in The Matrix 4.

In the original trilogy, plugged-in folk were the majority and Redpills like Morpheus and Trinity were few and far between. Neo’s function was to support the latter, but the balance could shift due to Neo’s sacrifice, making freed humans the norm and Bluepills the minority. In this scenario, Neo’s One code might automatically begin to represent the subversion of those who want back in to the Matrix, rather than his usual role of aiding those who wish to escape. Essentially, he’d turn into an agent for the Machines, not Zion.

Even if Neo could be reprogrammed, Keanu Reeves’ character is no easy target. Surely, his will is strong enough to avoid becoming a puppet for the Machines. Possibly, but not if part of Neo’s mind actually wants to break bad. Neo gave his life to ensure everyone could return to reality. Coming back in The Matrix 4 and witnessing entire crowds desperate to get re-plugged would be mightily disheartening for the original trilogy’s hero. Because of this burning anger, Neo may not subconsciously resist his changed One programming. He’d attack and oppress humans, battling to reestablish the Matrix system he so valiantly brought down. If you thought Neo was formidable before, just wait for angry, brainwashed, up-to-date-software Neo in The Matrix 4.

Craig first began contributing to Screen Rant in 2016, several years after graduating college, and has been ranting ever since, mostly to himself in a darkened room. Having previously written for various sports and music outlets, Craig’s interest soon turned to TV and film, where a steady upbringing of science fiction and comic books finally came into its own.
Craig has previously been published on sites such as Den of Geek, and after many coffee-drenched hours hunched over a laptop, part-time evening work eventually turned into a full-time career covering everything from the zombie apocalypse to the Starship Enterprise via the TARDIS.

Since joining the Screen Rant fold, Craig has been involved in breaking news stories and mildly controversial ranking lists, but now works predominantly as a features writer.
Jim Carrey is Craig’s top acting pick and favorite topics include superheroes, anime and the unrecognized genius of the High School Musical trilogy.