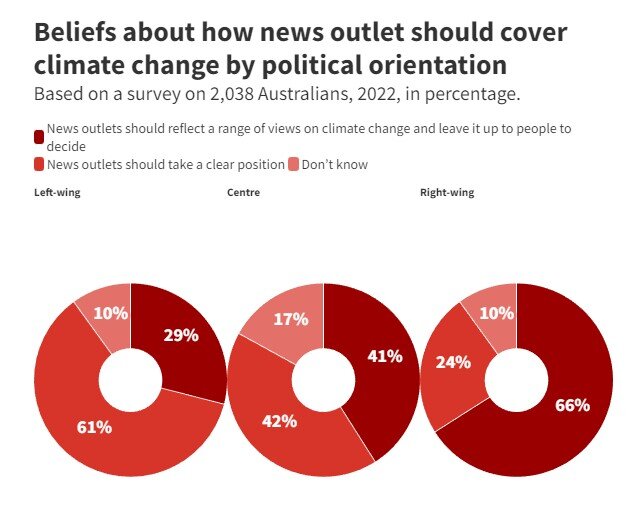 Should journalists always treat an issue even-handedly? Our research reveals that when it comes to climate change, many Australians would prefer they didn’t. For general news, people want news outlets to reflect a range of views so they can make up their own mind about an issue. However, when it comes to news about climate change, four in ten say news outlets should pick a side.

That’s according to new research that surveyed 2,038 Australians about their news consumption in relation to climate change. The Digital News Report: Australia 2022 survey was conducted by the University of Canberra between January 21 and February 16 2022.

These differences may partly be explained by varied levels of concern and where people get news about climate change.

Concern about climate change is becoming increasingly polarized across the political spectrum. On the left, 81% express concern, but only 32% of right-leaning consumers do. There is a disconnect on climate change between people who identify with the center of politics and those who identify with right-wing beliefs, particularly among those with higher incomes and in urban areas.

While more than a third (38%) of right-wing consumers regard climate change as a “not very” or “not at all” serious problem, centrists are more concerned, attentive to climate change news and willing to see journalists take a clear position on the issue. This may help understand the success of teal independents in the 2022 federal election, many of whom campaigned on climate action in traditionally center-right urban electorates.

News consumers in regional areas remain less concerned about climate change than those in cities, despite extreme weather events and bushfires disproportionately affecting regional areas. This may reflect the fact that higher proportions of older and more conservative Australians live in the regions.

Encouragingly, rather than relying on celebrities and political parties, people go to experts and traditional news outlets for news about the climate crisis. The most popular sources of climate change news are scientists, experts and academics (50%), documentaries (33%) and major news outlets (27%).

There seems to be a small but important minority of Australians who have disengaged from the issue entirely. One in five Australians say they don’t pay any attention to climate change news.

When it comes to reporting about climate change, Australians want less focus on individual responsibility (16%) and more attention on what governments and large companies should do about it (42%). Younger generations and left-wing Australians are particularly keen on both of these things.

The issue of climate change turned out to be serious enough to convince many to vote against traditional two-party lines, reshaping the political landscape and placing action on climate change as a spotlight issue for the incoming Labor government.

The number of climate deniers in Australia is more than double the global average, new survey finds

Citation:
Climate change: The issue on which Australians do not want both sides of the argument (2022, June 15)
retrieved 15 June 2022
from https://phys.org/news/2022-06-climate-issue-australians-sides-argument.html