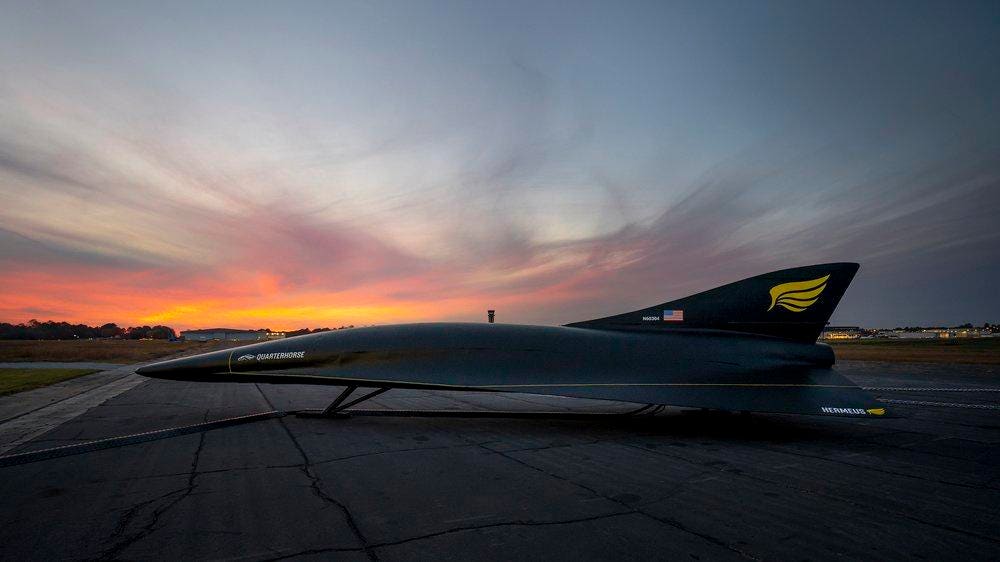 The Defense Innovation Unit (DIU) is essentially the Pentagon’s in-house commercial technology adoption accelerator. Staffed by a mix of active military and technology sector experts, it seeks to get commercial solutions in the door, scaled, and applied to DoD problems.

The portfolio of cyber, autonomy and space technologies DIU has managed to transition to the military is evidence of some success. Built on the promise of profits-to-come by non-traditional private firms, these solutions emerge and develop outside defense circles with alternative problem-solving and pace the government cannot match. That’s what DIU is hoping to tap to move military hypersonics deployment forward.

“We know that private money is being used to build [commercial] hypersonic transports for passengers and cargo,” says Barry Kirkendall, DIU’s technical director for space. “Five or ten years ago, that wasn’t the case, but it is now. We want to leverage that private investment, those companies for the Department of Defense.”

By hypersonic research standards it’s a short window. But given the demand for hypersonic testing and the backlog America now faces, it has to be.

“Hypersonics research initially leveraged [U.S.] missile infrastructure, the testing ranges, factories and design folks,” Kirkendall observes. “The missile work never slowed down. What changed was the [research] tempo increased and as a result our infrastructure couldn’t handle it. So we find ourselves leaning on wind tunnels and test ranges that have hardly any availability. We can’t afford to build new infrastructure and new ranges so we’re looking for another solution.”

The national test infrastructure is also aging. A report issued last year by the Governmental Accounting Office pointed out that 14 of the 26 DoD, NASA and Energy Department wind tunnels capable of supporting hypersonic research were built in the 1970s. New private-sector wind tunnel facilities are under construction at Purdue University and elsewhere but their cost is high and completion years away.

What’s more, ground and laboratory test facilities cannot yield the insights that actual flying hypersonic vehicles with purpose-built payloads can. Hypersonic wind tunnel runs are short, the longest last a matter of seconds. The sensors and instrumentation that can be placed in tunnels or on test articles are limited, generally allowing for data “snapshots” rather than longer flows of information.

What little flight testing has been done with missiles and a handful of hypersonic vehicles is similarly limited by sensor, telemetry and range challenges. Only a few hypersonic flight vehicles are reusable with long intervals between flights. The majority splash down in the ocean where recovery is difficult to impossible.

Prior to joining DIU, Kirkendall ran the nuclear weapons effects program at Lawrence Livermore National Laboratory. He compares the obvious inability to test and instrument nuclear explosive devices to the challenge of hypersonics and reminds us that experiments in laboratory or simulated flight settings don’t always “scale” accurately.

“There’s a missing intermediate step. We need the wind tunnels, they’re critical. We need the full fidelity flight test of weapons. But there’s a whole gap in the middle; test-specific technologies that are not fully integrated that might reduce risk. That’s what we’re trying to address.”

DIU’s HyCAT request for information (RFI), called for “capabilities of interest” including:

There are a number of private-sector companies whose goal is developing hypersonic commercial passenger and cargo aircraft by some hazy future date. Perhaps the best known is Hermeus, an Atlanta-based firm I’ve covered previously which has already tapped U.S. Air Force AFWERX funding to develop a quarter-scale, payload-carrying hypersonic flight test vehicle called “Quarterhorse” on its way to making a hypersonic airliner, putatively for presidential use.

“Those quarter and half-scale test articles are something that can help the DoD,” Kirkendall affirms. “We don’t need a fully mature hypersonic passenger airplane to test hypersonics.”

Quarterhorse has a leg-up in being both on the cusp of actual flight and being reusable. The latter element is crucial Kirkendall says, not just for cost considerations. “Reusability is key to increasing the test cadence and understanding what just happened in a test.”

By understanding “what just happened” in a test, Kirkendall alludes to a sort of forensic approach to hypersonic research. Examining the flight test vehicle and its payload post-flight can circumvent some of the data-collection and telemetry limits associated with hypersonic testing.

“We think we’ll see a lot of innovative approaches to getting data from a hypersonic test vehicle that we haven’t thought of whether space-based, balloon-based or something else,” says Major Ryan Weed (USAF), director of DIU’s space portfolio. Those innovative ideas, it’s hoped will come from international companies as well.

Wherever the responses come from, they’ll need thorough vetting. DIU does due diligence as a matter of routine but the fuzzy nature of the non-defense hypersonic aircraft industry – which like the UAM and supersonic air transport sectors has yet to produce marketable products – may require extra effort.

Kirkendall and Major Reed (a USAF test pilot) are both expert in their respective areas and stress that DIU maintains a high requirement for technical feasibility assessments. “At DIU it’s not just the technical feasibility,” Reed adds. “It’s also the health of the [partner] company. Can that company deliver the technology they do have?”

Given the over-exuberant flow of private money to similar companies in the UAM space, potential hypersonic aircraft developers might indeed have a healthier balance sheet than product development potential. But DIU’s multi-faceted approach to assessing HyCAT candidates should separate the weed from the chaff, its directors say.

Major Reed points out that they do so in deliberate fashion not to “get in the way of a company’s progress toward their own products” He opines that only way for HyCAT to be successful is focusing on solutions for which defense is not the primary application.

Speaking of applications, interested contractors have until this Friday to make their pitches for HyCAT. When I spoke with Kirkendall and Reed last week, they had received only a handful of proposals. “You never see anything turned in until the bitter last minute,” Kirkendall assures. DIU expects a “few dozen” responses.

If they do come in numbers, the private money behind them may put paid to the old joke about hypersonics being the “weapon of the future” for the last 60 years.

Denial of responsibility! TechCodex is an automatic aggregator of the all world’s media. In each content, the hyperlink to the primary source is specified. All trademarks belong to their rightful owners, all materials to their authors. If you are the owner of the content and do not want us to publish your materials, please contact us by email – [email protected]. The content will be deleted within 24 hours.
ChinaDefense Innovation UnitDoDHermeusHyCAThypersonic aircrafthypersonic transportprivate capital
0
Share