Tennis World Tour 2 confuses me in more than a few ways. Before we even get to the game itself, which almost had me do a Djokovic through tossing my controller away in frustration, there’s the perplexing aspect of its development and release. If you don’t remember, the original Tennis World Tour was crap. After over a year of updates and a new Roland Garros edition, it finally reached the lofty heights of “playable”.

With Tennis World Tour 2, old developers Maximum are nowhere to be seen and Big Ant Studios having been brought in. You may remember Big Ant Studios from the development of AO Tennis 2, A game also published by Nacon (then Bigben Interactive). So we’ve got the same developers and same publishers of a completely different Tennis IP undeniably looking at the same market.

WRC 9 Review – Standing on the Podium

So, I said that the game almost had me do a Djokovic in frustration. What’s caused this reaction? I’m glad you asked. The issue is the core game mechanic which is unwelcomingly based on timing. You’ll start by getting into position and when the ball is getting close you can start to hold the button that corresponds to your chosen shot, or you can simply press the button if you’re not wanting to add power to your shot. All sounding reasonable, but the key is to release the button – or press it – at the optimal point of the swing.

This is where things start to fall apart. The issue with this system is that it has no leeway when it matters. As with any sports game, the major mode is the career mode. The problem is that when you start your career, you’re essentially a flipper-handed monstrosity that barely knows how to handle the racket. Any hit that isn’t good or perfect, the game tells you about your timing, will result in a lost point nine out of ten times. The problem is that if you’re an average player, most of your hits will miss this very narrow margin even if you think you got the timing right. All of this starts a cascading effect of frustration, lost points and my controller being used as a shot put.

What doesn’t seem to help is that this attention to realism – as commendable as that can be – is the only way to play. Your timing indicator is the swing of your racket, which is annoying when you’re likely watching the ball hurtling towards you at what seems like Mach 1. You can turn the difficulty down but all that means is that you’re going to be completely reliant on your opponent messing up. At least that’s how I found myself winning matches, not that I needed to turn the difficulty down because the AI seemed completely incompetent, consistently hitting double faults and hitting the ball out even when a low-ranked player shouldn’t.

Keeping on with timing and accuracy, there’s also the new serving system which is actually pretty good. You start to serve and a semicircle appears, choose your shot type by pressing the button (hopefully) at the apex of the semicircle and then a dot appears above your players head, let go of the button when the ball is inside the dot. Start to the left or right of the semicircle, your throw will drift in that direction, making it harder and reducing your accuracy, let go wrong and your power is impacted. The only problem is that if your character’s attributes are too low, even getting it perfect leads to faults the vast majority of times, leading back into the whole playing the game issue. 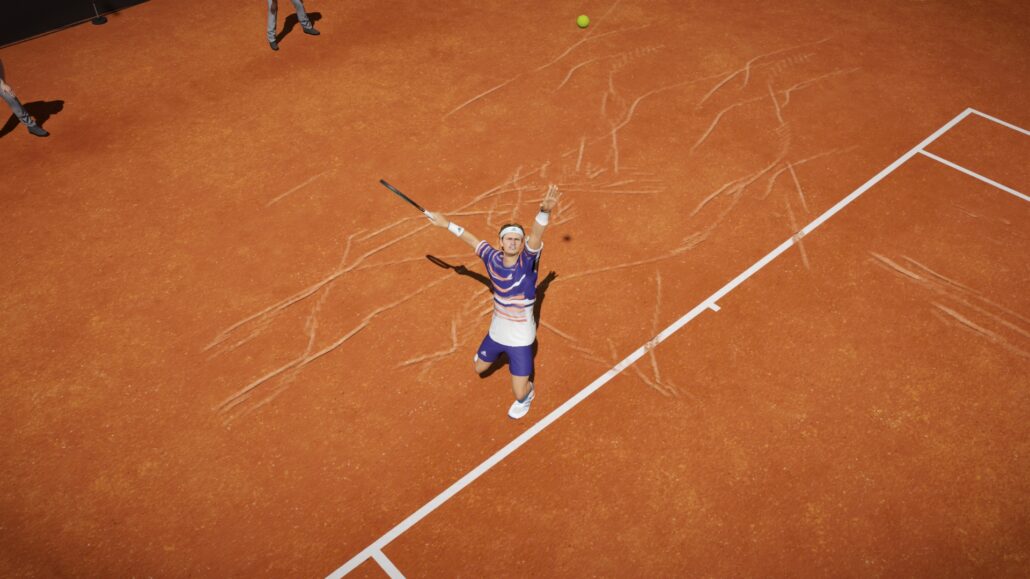 All of this is to say that I am not enjoying playing my career in Tennis World Tour 2. Can I jump in an exhibition match and have a good time? Yes. Am I about ready to set my house on fire just so I never have to see the career mode of this game again? Maybe. No game should make their core game mode this unapproachable. As I’ve said, the only way I found myself winning is for the enemy to hit the ball out. I had to play it safe because when I tried to score under my own volition the ball would hug the net or fly off in a random direction, making me feel my input was seen more as a vague suggestion than a command.

The annoying part is that I can see this truly being enjoyed by certain people who get the timing a lot easier than me. I genuinely found myself enjoying it when I would have one of my handful of good/perfect hits strung together or when I used players like Federer in an exhibition match, where their attributes compensate for the mistimed presses. At these moments, it all feels fluid and smooth, it feels like Tennis. This is the gameplay I want all the time, so there should be options that reduce the reliance on being ultra-precise. Accessibility, as much as some people disagree, is not a dirty word.

Right, I’ve griped enough about that. Let’s talk game modes. Tennis World Tour 2 has a fair amount of variety, letting you jump into a simple exhibition match or create your own tournament, offline or online, and offering both singles and doubles matches. Then you have the career mode, which is extensive in itself, letting you continually go through season after season, year after year, offering a progression of training modes, exhibition matches and tournaments, as well as the swapping of coaches, agents, and sponsorship deals. 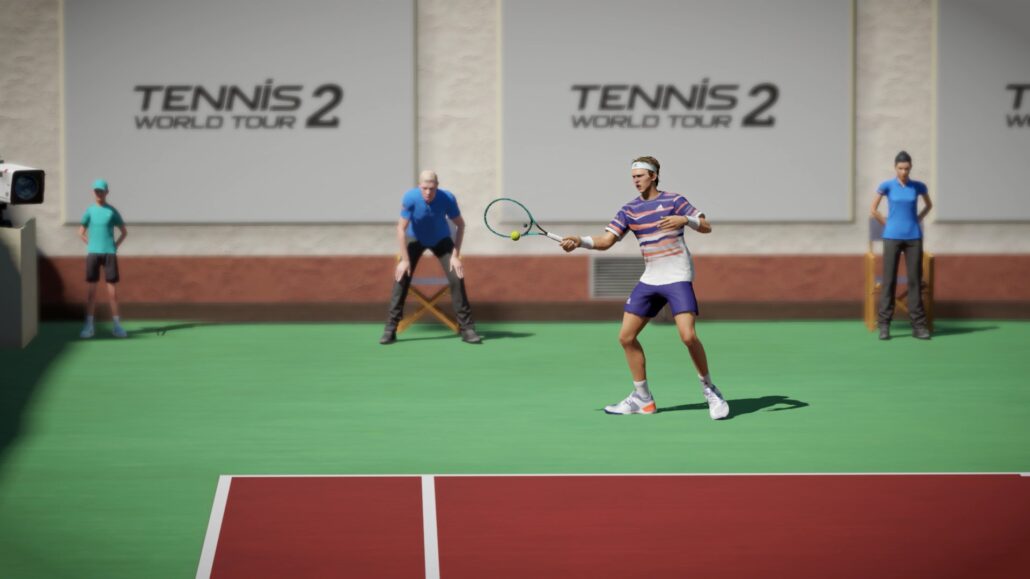 So yes, the gameplay is decent if you can get the hang of it or if you use a character with a high level of attributes, otherwise, it’s unapproachable and terribly inaccessible. While you’re playing, you’re also going to notice another of my slight issues with the game, the visuals. Specifically, the visuals when you get close up to the characters. I’m not going to say the game looks bad, it doesn’t, but it doesn’t look great either.

As I’ve said, the problem is when you get up close. I first noticed this in the character creation, but there’s just something unreal about the players. If I were to liken them to something, I’d say it’s like Madam Tussauds gone wrong. The players look like something from a waxwork nightmare, all dead-eyed and sinewy. Also, the limited variety in character creation looks even worse, particularly as you’re always stuck with a massive forehead. A minor gripe I suppose, but it’s there.

I really wouldn’t have an issue if the game just never zoomed in on the characters because I honestly like the way it looks from afar. You don’t notice the dead-eyed lifelessness of these automatons then. The animations are smooth, you can see what the player is doing, the swing they’re going for. Also, the bright colours keep it looking attractive. What also helps is that everything around the match is also done well, particularly the crowd, and reacts to the game as it progresses. It all helps to draw you into the game of tennis being played in front of you. 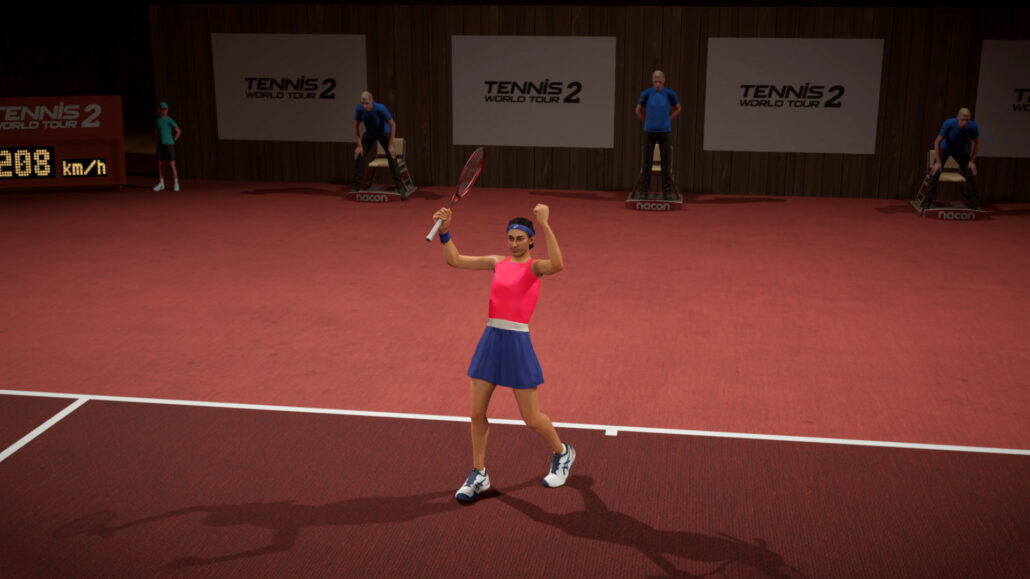 Do I like Tennis World Tour 2? Not really. This isn’t a slight against the game, it just isn’t for me. I’m not going to say “it’s the Dark Souls of Tennis games”. If I did, I’d have to drill into my skull to release the demons, but what I will say is that it’s just too unforgiving and too fixated on the timing mechanics that the whole tennis part of this tennis game is based upon.

If I practised an unhealthy amount, I’d be able to get over any deficiencies and master the game. Frankly, I don’t want to. I just want to hit the ball and have fun in my own career, learning and improving as I progress. This is something Tennis World Tour 2 doesn’t want me to do. Losing over and over again because you can’t get the invisible timer just right isn’t fun, neither is winning cheaply because the AI keeps messing up. All you’re left with then is playing as a star, but a star is already a star and it’s only downhill from there.

Tennis World Tour 2 is an undeniable improvement on the original release and it’s also arguably a great tennis game for those who can get into it. Aesthetically, it looks good from afar, with fluid animations and speed that honestly gives the feel of a tennis match and features a wide number of game modes, giving you a lot to play through. The problem, however, is that the core game mechanics are inaccessible and unapproachable, offering no settings to reduce the reliance of awfully specific precision-based button pressing which can ruin the core career mode. A mixed bag, this will appeal for fans of tennis, but the opaque nature of the gameplay makes it too hard to recommend.

Cynicism suggests that the TikTok deal will go through