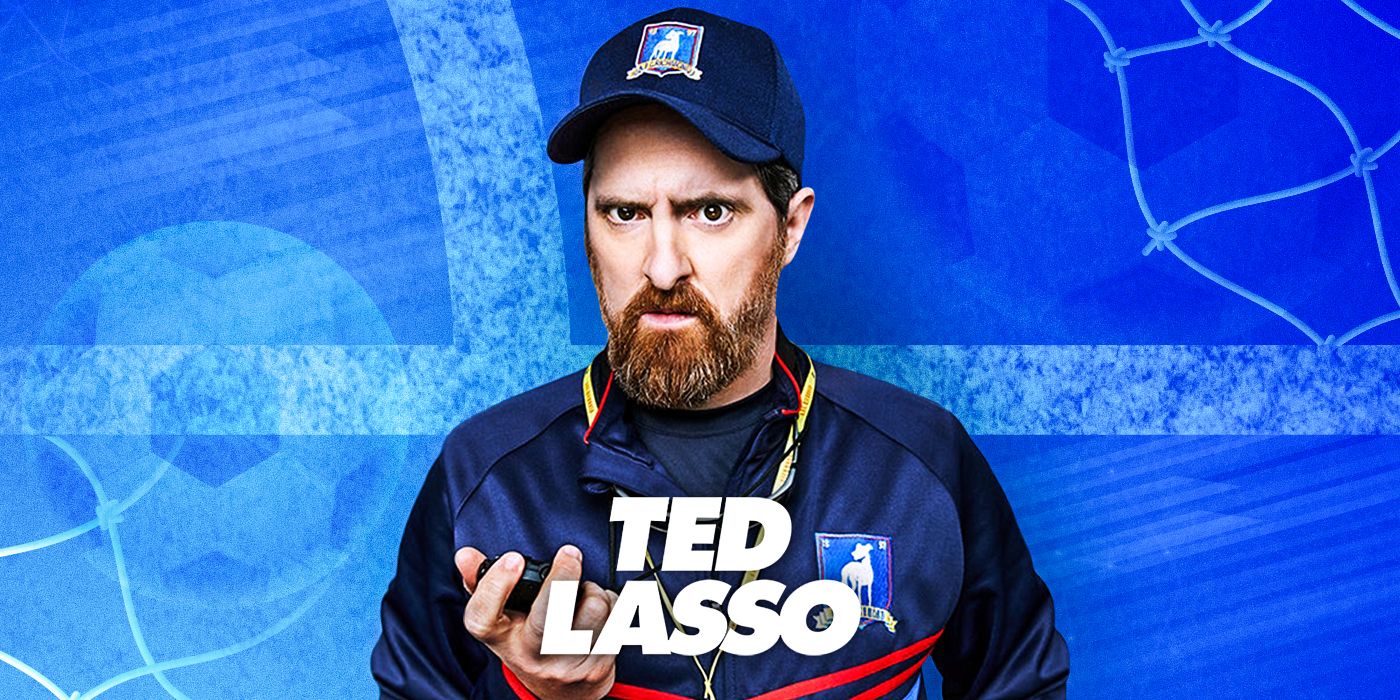 Based on pre-existing characters from NBC Sports and developed into an Apple TV+ comedy series by Jason Sudeikis, Bill Lawrence, Joe Kelly, and Brendan Hunt, the highly acclaimed Ted Lasso is back for Season 2 with all of the warm fuzzy feelings that it gave fans with its first season, while digging a little deeper and getting a bit darker. Ted Lasso (Sudeikis) still has all of the optimism and underdog determination that’s worked in his favor when it comes to coaching AFC Richmond, but when he finds himself at a crossroads in his personal life, he chooses to bury his own pain to focus on turning the team’s fortunes around.

During this virtual 1-on-1 interview with Collider, which you can both watch and read, Hunt, who plays Coach Beard while also being an executive producer and writer on the series, talked about believing in the potential of Ted Lasso, what contributed to the existence of the show, how it’s darker than a typical sitcom, the introduction of “Led Tasso,” and how emotional they’re going to get, if things really do end with Season 3 (which was the original plan).

Collider: I absolutely love this show. I’m one of those people who is not a sports fan, so I was dragged into this show kicking and screaming, and absolutely fell in love with it and can’t get enough. So, thank you for converting me.

Everyone calls Ted Lasso a surprise hit, but was it really a surprise to you? Deep in your heart, did you always feel like the show had potential to be a hit, or were you worried that it wouldn’t connect with anyone?

HUNT: I guess we all thought it had potential to be a little bit of a hit. You have to believe in the show to some degree, and we did, but there are some shows that all of us have liked, that never quite found an audience. Some of them live on, through streaming or whatever, and are still adored. But you just don’t know where you’re going to land, and so to get the response we’ve gotten is jaw-dropping. We’re just trying to make a comedy, and yet people are finding not only laughter in it, but meaning, apparently. It’s not what we were going for and it’s not what we expected, but we’re just very grateful.

It’s one of those shows that anybody I know that tells me they’re having a bad day or a bad week, I tell them, “Have you watched Ted Lasso yet, because you should do that,” and they always thank me, so at least it’s serving its purpose.

Does the optimism of this show rub off on any cynicism you might have in your own life?

HUNT: A little bit, to a degree. A big part of why Ted Lasso exists is because three of the creators – me, Jason [Sudeikis] and Joe Kelly – lived in Amsterdam for a while, and though Ted has what I call Midwestern optimism, there’s also a bit of Dutch life philosophy in this as well. I come from Chicago and am a child of Irish Catholic parents who were able to wield guilt like a Ginsu knife. And then, I go to Amsterdam and find out about this thing that has no literal translation. It can be just like a warm sweater or sitting by the fire, but it can also be like when the car breaks down and we’re all on the side of the road, but we all get to chatting. Bringing it back to Ted, and I promise I will, it also means that, if you’re worried about a thing, but you cannot affect the likelihood of that thing to happen or not by worrying about it, then you’re wasting your time by worrying about it. It does you no good. Having been raised on guilt like it was wheat, that was an incredibly powerful concept. I do think a big part of that is in Ted too. It just doesn’t help you to worry about that thing. That thing’s gonna happen or it isn’t, so lighten your load.

Jason Sudeikis has referred to Season 2 as your Empire Strikes Back. Why do you feel that’s a good description of Season 2? What do you think that says about Season 2?

HUNT: Well, I shouldn’t tell you this, but I’m just gonna do it. Beard gets his hand cut off. Rupert [Anthony Head] brings a sword and he cuts off Beard’s hand. It gets real dark. And then, we have talking dogs that fight with rocks. You got it out of me, sneaky Christina!

HUNT: Called Endor. Oh, wait, that’s Return of the Jedi. Oh, my God, I’ve mixed up my Star Wars movies. Oh, no, the internet is gonna come for me.

RELATED: ‘Ted Lasso’: Where Season 1 Left Off and What’s Ahead for Season 2 of the Beloved Sports Comedy

HUNT: I think so. It’s darker than maybe a sitcom is supposed to be. The thing is, it’s really cool that people look at the show and come away with a feeling of positivity and real inspiration, but even in Season 1, it’s not all sunshine and roses. It’s not the Teletubbies. We end up in a place of positivity, after people go through some shit. It’s about where you are, after you’ve gone through that, as opposed to just not going through anything. So, the microcosm of that is, people will continue to go through stuff in Season 2, and you see some of that in the first few episodes, but there’s a little bit more to come.

Jason Sudeikis has also talked about having a very clear three-season arc for the show. If that is ultimately the case and you only have one more season left to do, has the reality set in, that saying goodbye to these characters is coming a lot sooner than you would think?

HUNT: We’re just not there yet. We’re still in post on Season 2, so we cannot think that far ahead, really. One weird sideways way I’ve thought about it is that wrap parties after a season are usually really raucous, we’ve finished the school year kind of events. But our wrap party after Season 2 was less raucous, for two reasons. One, it was COVID and we were outside and there was no DJ. We weren’t going nuts. But I realized later, the other reason is that we know we’re coming back already. Most shows don’t typically know that. So, there was not this extra gravity of, “Goodbye. Will we ever see each other again?” We know we will. But having said that, at the end of Season 3, people are gonna cry. That wrap party is gonna be the river of tears, but also have a DJ, so maybe that’ll balance out.

Do you know how the series is meant to end? Don’t tell me, so that you don’t have to kill me, but do you know where it’s headed to?

HUNT: Essentially, yes. We know the arcs of basically all the characters. Once we get into the nuts and bolts of putting that season together, maybe the things we currently foresee will change. As of now, it’s a matter of how we thread it all together and make our narrative lattice, but basically, yeah.

How does Coach Beard feel about Led Tasso and what was it like to actually see that brought to life?

HUNT: It was great to see because it hearkens back to the first commercials we did, when it was a different version of Ted and not the gentler version that we started to discovering in the second commercials. But in terms of Beard’s response, Led Tasso is who you turn to when there’s nothing else. If we have to go to Led Tasso, that means we’re in trouble already. And of course, there is the great fear that such a powerful weapon could do more damage than you want it to do. It’s a grave time, whenever the dark aviator shades have to come out.

So, there is an Empire Strikes Back vibe then.

HUNT: Exactly. See, it just creeps in all of these little places.

As much as I love these characters and each of the players on this team, they are a bit dysfunctional, so I was delighted by the addition of the doctor, who’s now there to help them. What do you think that adds to Season 2 and what do you enjoy about what Sarah Niles brings to the show?

HUNT: Sarah Niles is a rock. She’s just great. And she’s actually quite a hoot, off-camera. She’s damn near bubbly. In terms of the show, she’s almost a similar foil to Roy, in a way, as Roy was, at the beginning of Season 1. Whereas Roy was a mirror of anger, in a weird way, if it’s a fun house mirror of anger, Sharon is even more of a blank slate. Sharon is more Mount Rushmore or Easter Island, or Rapa Nui. She’s also now actively studying Ted, while she’s giving him nothing. It’s just a different dynamic and another hill for Ted to climb. I think it’s fun. I’m just so happy we got Sarah. She’s fantastic. She did a great job this season and I’m looking forward to everyone getting a chance to check it out.

Here’s what the first round of critics and journalists had to say.

Christina Radish is a Senior Reporter at Collider. Having worked at Collider for over a decade (since 2009), her primary focus is on film and television interviews with talent both in front of and behind the camera. She is a theme park fanatic, which has lead to covering various land and ride openings, and a huge music fan, for which she judges life by the time before Pearl Jam and the time after. She is also a member of the Critics Choice Association and the Television Critics Association.

Relaxing behind the wheel of Mercedes’ autonomous Drive Pilot