Suspects in California’s latest killings are far from that average 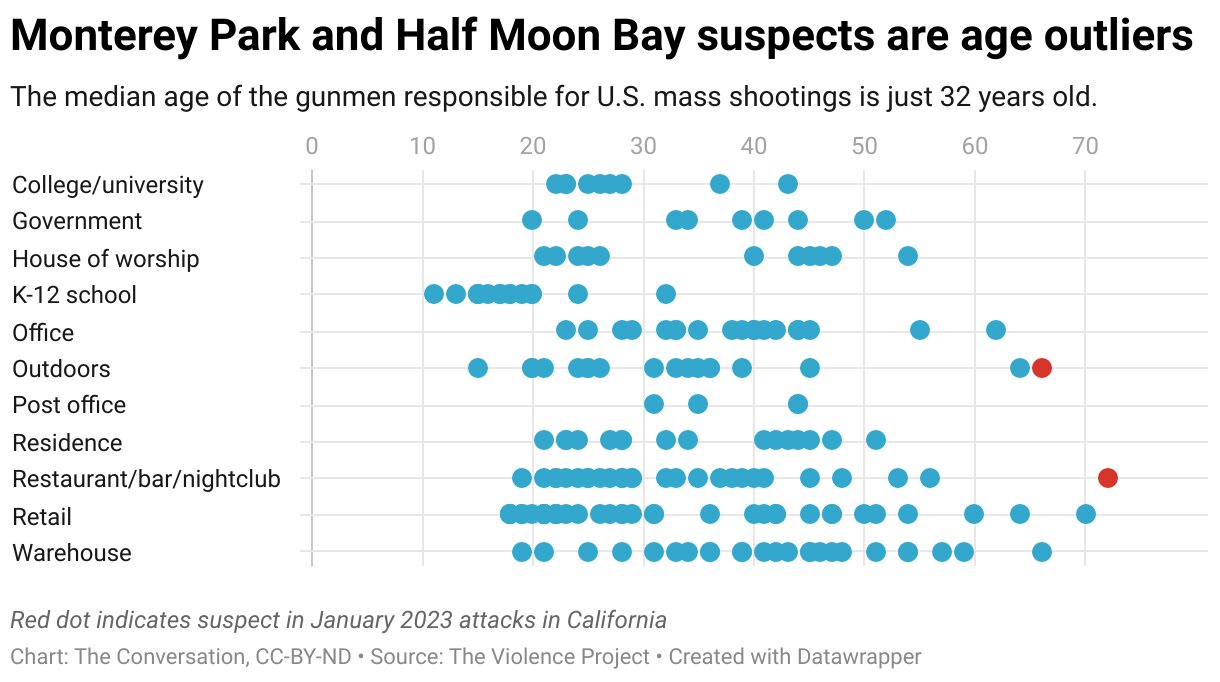 The two men who shot dead 18 people in separate incidents just days apart in California are the latest perpetrators in America’s long history of mass gun violence. But something about these public shootings, and the men held responsible, stands out.

The median age of mass shooters in the United States is 32. Yet the man who is alleged to have shot dead 11 people in Monterey Park on Jan. 21, 2023, before turning the gun on himself was 72 years old—the oldest mass shooter in modern American history, our records show. Meanwhile, the gunman who took the lives of seven more in Half Moon Bay two days later was also older than most—66, the third-oldest in history.

We are criminologists who built a database of 191 mass shooters using public data. The shooters in our records date back to 1966 and are coded on nearly 200 different variables, including age at the time of attack. Our research shows that mass shootings—defined here as events in which four or more people are killed in a public place with no underlying criminal activity—have become more frequent, and deadly, over time.

Since 2020, the median age of mass shooters has come down to just 22 years old—mostly young men and boys who were born into or came of age in an increasingly divided America and carried out their attacks amid the disruption of a global pandemic.

Ages vary by shooting location, the data shows. Though mass shooters at offices, warehouses and houses of worship skew older, shooters at K-12 schools, colleges and universities tend to be younger—in large part because many school shooters tend to be current or former students.

Prior to the tragic incidents in Monterey Park and Half Moon Bay, just six mass shooters in our study were over the age of 60. The oldest was a 70-year-old who killed five people at an auto parts store in Kentucky in 1981. The list also includes the perpetrator of the deadliest mass shooting in U.S. history—a 64-year-old who killed 60 people at a 2017 music festival in Las Vegas.

Nearly all of the over-60s perpetrators of mass shootings prior to the January 2023 Californian incidents were white men—just one was a nonwhite male. This differs in the Monterey Park and Half Moon Bay incidents, both of which are thought to have been carried out by Asian Americans.

Mass shooters over 60 also tend to have prior criminal records and to target their place of employment, or retail and outdoor locations in communities they knew well.

What separates the older mass shooters from their younger counterparts is that mass shooters in their 20s and 30s typically study previous mass shooters for inspiration and validation. Younger shooters also tend to communicate intent to do harm in advance. This practice, known as leakage, is often seen as a final cry for help. Younger shooters also tend to leave behind manifestos to communicate their anger and grievances to the world, the data shows. Analysis of their expressed motives suggest they are seeking fame and notoriety for their actions.

None of the shooters aged 60 and above in our database did that—although investigations are ongoing in the back-to-back California cases. Instead, they tend to have experienced a recent stressor, such as a family conflict or debt. They are more likely to be motivated by legal, financial and interpersonal conflicts, not hate or fame-seeking like many of their younger counterparts.

But all perpetrators of mass shootings, young and old, have some things in common. Their mass shooting is intended to be their final act. Whether they die by suicide—as is seemingly the case with the alleged Monterey Park shooter, are killed on scene, or sit and wait to be arrested like the Half Moon Bay suspect did, mass shootings are a final act of hopelessness and anger.

They also have access to the firearms they need to commit these devastating crimes.