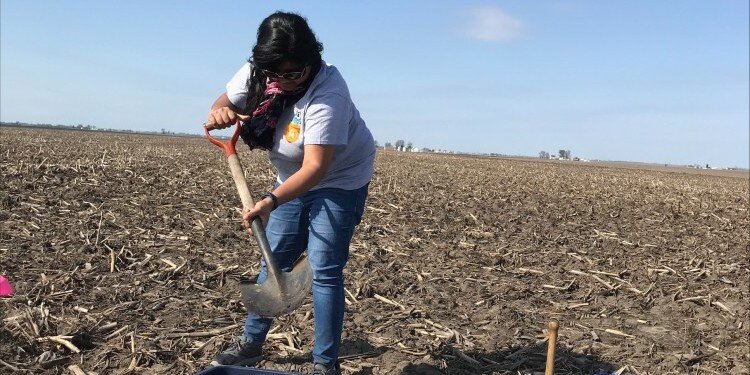 Soil organic carbon is a cornerstone of soil health. It improves soil structure while enhancing water- and nutrient-holding capacity, key factors for any agricultural production system. To build it up, farmers incorporate crop residues into soils.

So why, despite decades of residue inputs, is soil organic carbon diminishing in corn production systems? Short answer: it’s the nitrogen.

“With intensive nitrogen fertilization, you may get more corn biomass and yield, which means you end up putting more residue into the soil. But you cannot keep that carbon in the soil,” says Richard Mulvaney, professor in the Department of Natural Resources and Environmental Sciences (NRES) at the University of Illinois. “The nitrogen in the residues stimulates the microbes to burn carbon off through respiration. So you can put more in, but you can’t keep it.”

The concept that nitrogen fertilization affects residue decomposition—and therefore the incorporation of residue into soil organic matter stores—isn’t new. But previous studies showed conflicting results. That’s why Mulvaney and Tanjila Jesmin, a doctoral researcher in NRES, set out to clarify how residue quality and the form of nitrogen affect corn residue decomposition in a typical Corn Belt soil.

Thanks to the historic Morrow Plots at Illinois, the team was able to test residues from corn grown with and without high nitrogen fertilization.

“We designed an aerobic incubation study, adding these two residues to a typical cropped soil with or without two forms of nitrogen. We then observed the decomposition process by continuously measuring carbon dioxide production, as well as periodic measurements of enzyme activities and microbial biomass,” Jesmin says.

The researchers found the presence of nitrogen—either exogenously applied to residue or already incorporated in growing corn tissue—accelerated residue decomposition and produced more carbon dioxide. The form of nitrogen applied, potassium nitrate or ammonium sulfate, made no difference.

“The carbon in corn residue comes from the atmosphere, and it returns to the atmosphere during decomposition. That’s not an issue,” Mulvaney says. “The problem is that when microbes have a high nitrogen supply, they also have a high demand for carbon as an energy source. With high nitrogen rates their demand may exceed the carbon supply in residues, which may cause them to attack stable organic matter. And therein lies the long-term problem.”

During the first month of soil incubation, residue carbon decomposition was more rapid in the presence than absence of nitrogen fertilizer. However, carbon dioxide production in the second month was slower for fertilized than unfertilized soil. By the end of the study, the total amount of carbon dioxide produced was greater with than without added nitrogen.

“It’s like burning leaves in the fall. You put more leaves on the fire, and you get more flames. And so, with that added nitrogen, the residue goes more quickly early in the incubation. Then the fire dies down because you had already burned up the readily decomposable substrate. We get there sooner with nitrogen,” he says.

According to the researchers, further studies are underway to evaluate the effect of mineral nitrogen on residue decomposition in soils with contrasting characteristics.

“Because our incubation utilized a single soil type, the findings might not be valid everywhere. With soils low in native fertility, intensive fertilization is often effective for increasing residue carbon inputs. We want to see if these inputs help to build soil organic carbon,” Jesmin says.

The study, “Short-term effect of nitrogen fertilization on carbon mineralization during corn residue decomposition in soil,” is published in Nitrogen.