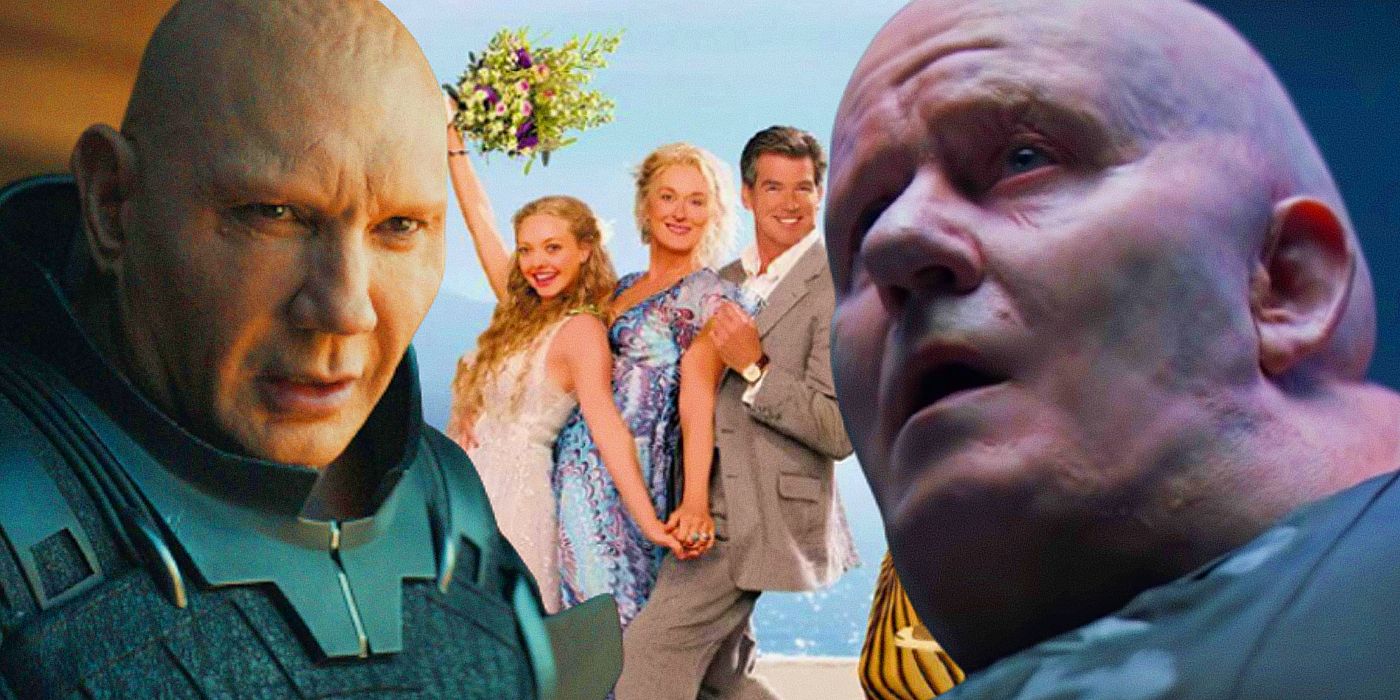 Stellan Skarsgård wants his Dune co-star, Dave Bautista, to the join him in the cast of Mamma Mia! 3 whenever the highly anticipated sequel begins production. The first Mamma Mia! movie released in 2008 as a direct adaptation of the popular broadway jukebox musical of the same name, based on the classic songs of the iconic Swedish pop group, ABBA. Its star-studded cast and catchy tunes proved to be a smash hit with audiences worldwide, allowing the film to gross more than ten times its initial production budget of $52 million USD. The original cast reprised their roles a decade later in the follow-up, Mamma Mia! Here We Go Again, which was also a critical and commercial success.

In the films, Skarsgård plays Bill Anderson – one of Sophie Sheridan’s (Amanda Seyfried) three possible fathers (alongside Pierce Brosnan and Colin Firth) that she invites to her Greek taverna for her wedding. The identity of Sophie’s biological father is never revealed throughout the course of the two movies, with the three men instead agreeing to each be “a third” of Sophie’s father. Skarsgård, Brosnan, and Firth all reprise their roles in the sequel in a smaller capacity to make room for the flashback-heavy sequences.

Related: Where Was Mamma Mia Filmed? All Locations In Greece

Skarsgård and Bautista recently sat down with Screen Rant to discuss the their work on Denis Villeneuve’s upcoming sci-fi epic, Dune. In the midst of the interview, Mamma Mia! became the topic of discussion with Skarsgård saying that he hopes to reprise his role in the sequel. The actor went on to say that he hopes Bautista will join the sequel’s cast, joking that he “want[s] to dance with David on an island in Greece.” Check out the actors’ full comments below:

Stellan Skarsgård: I wish I could say. It took 10 years between Mamma Mia! and Mamma Mia! 2 – if it’s going to take another 10 years, then I’ll be dead. I’m worried we might not get there. But if they call, I will say yes immediately, because the experience of doing those two films was fantastic.

Dave Bautista: It’s not going to be ten years. I guarantee you that people are on the phone; they’ve been anticipating this. And there is such a search for good entertainment, with all the new outlets that are constantly in search of media. I think there have been phone calls made, and Stellan will get a phone call when he gets home.

Stellan Skarsgård: Yeah, and hopefully you’ll be in it, Dave. We talked about that. I want to dance with David on an island in Greece.

Judy Craymer, producer of the original stage production, recently confirmed that a third movie is in development. She also confirmed that ABBA’s newly released songs would appear in Mamma Mia! 3. With most of the cast enthusiastic to return, all the pieces are in place for the sequel to come to fruition. Unfortunately, the film is currently undergoing delays due to the ongoing COVID-19 pandemic.

Hopefully Mamma Mia! 3 will release sooner than the ten-year window separating the first two films. Another decade may make the choreography-heavy movie difficult to film for older members of the cast, as Skarsgård himself states. Regardless, the final film of the trilogy will no doubt be a sentimental sendoff for the Sheridan family.

House Of The Dragon: Why Matt Smith’s Targaryen Casting Is So Divisive

Brendan Kim is an alum of Occidental College with a B.A. in History and Music Theory. During this time, Brendan interned at various nonprofit organizations aiding underserved communities in the Los Angeles area. He is also a lifelong fan of Star Wars and would get a degree in it if given the chance.

Anatomy of a woman monster

Wario Once Shattered YouTube With A Wii Game Trailer

The Internet Agrees You Need To Watch These Horror Hidden Gems

Apex Legends Players Warned Not To Use Animated…