SteelSeries recently released its new Arctis 7X and Arctis 9 wireless headsets. In terms of design, speaker drivers, performance, and microphone, the two headpieces are identical. As a matter of fact, both pack the same drivers as the well-received Arctis 1 Wireless.

There are, however, some key differences between the two – the first being that the Arctis 7X is designed for the new Xbox Series X|S while also being compatible with PC, Nintendo Switch and Android, whereas the Arctis 9 is mainly geared towards PC/PS5 and also supports BlueTooth connectivity. The Arctis 7X is also available in a version designed for the PS5, the Arctis 7P, and comes in a sleek white design (although also available in black) to match the color of Sony’s upcoming console.

Alright, so much for the introduction. Let’s continue with the official specifications of SteelSeries’ latest headset offerings.

As mentioned above, the Arctis 7X (7P as well) and Arctis 9 share the same design. Both feature a durable steel headband construction covered by SteelSeries’ iconic ski-goggle suspension headband and paired with athletics-inspired Airweave fabric ear cushions. The main differences between the two are the colors of the supplied ski-goggle bands, button layout, and the way the headphones connect wirelessly. In addition, there are some differences when it comes to tuning in the SteelSeries Engine 3 software, but more about that later on.

Just like the Arctis 1 Wireless, the 7X connects wirelessly through SteelSeries’ wireless 2.4Ghz USB-C dongle, allowing for a high-fidelity and lag-free gaming experience across multiple devices, including Xbox consoles, the Nintendo Switch, PC, and Android devices. Interesting to note is that while the Arctis 7P doesn’t work on Xbox consoles, the 7X does work on PlayStation consoles by setting the USB-C dongle to USB mode. Those looking for multiplatform compatibility should, without a doubt, pick the 7X over the 7P.

Whereas on the Arctis 9 the main controls can be found on the right ear cup, the 7X has them on the left side. Here we find the volume dial, micro-USB charging port, SteelSeries’ proprietary USB connection port, a 3.5mm audio jack, mute button, and the retractable Discord-certified microphone which emits a red light when muted.

On the right earcup, we find only two buttons – the ChatMix control dial, which allows users to control the balance between in-game audio and in-game chat, and the power button. This power button also functions as a quick battery indicator, flashing in green, yellow, and red, depending on how much juice is left in the battery. On PC, the power button also allows you to control media – with a single press, users can answer or end calls, and play/pause music. Skipping to the next track takes two presses while moving back to the previous track requires three presses. It’s quite easy and works wonders when listening to music.

SteelSeries has hit the soft spot with the button layout on the Arctis 7X. Buttons are easy to reach and having the two control dials on different earcups is the right way to go.

As said, the Arctis 9 is more tailored towards PC and PlayStation 5 players. The supplied ski-goggle headband comes in a Black/White design as opposed to the Black and green colors of the 7X. The Arctis 9 shares its design with the Arctis 7X, although the button layout has been swapped – the main controls, including the mic mute button, BlueTooth button (which blinks blue when connected to BlueTooth only, white when connected wirelessly, and blue/white when using both connections), power button, and the volume dial, are found on the right earcup as well as the 3.5mm audio jack and micro-USB charging port. I had a hard time getting used to the high placement of the volume dial on the right earcup and adjusting the volume on the Arctis 7X felt much easier. 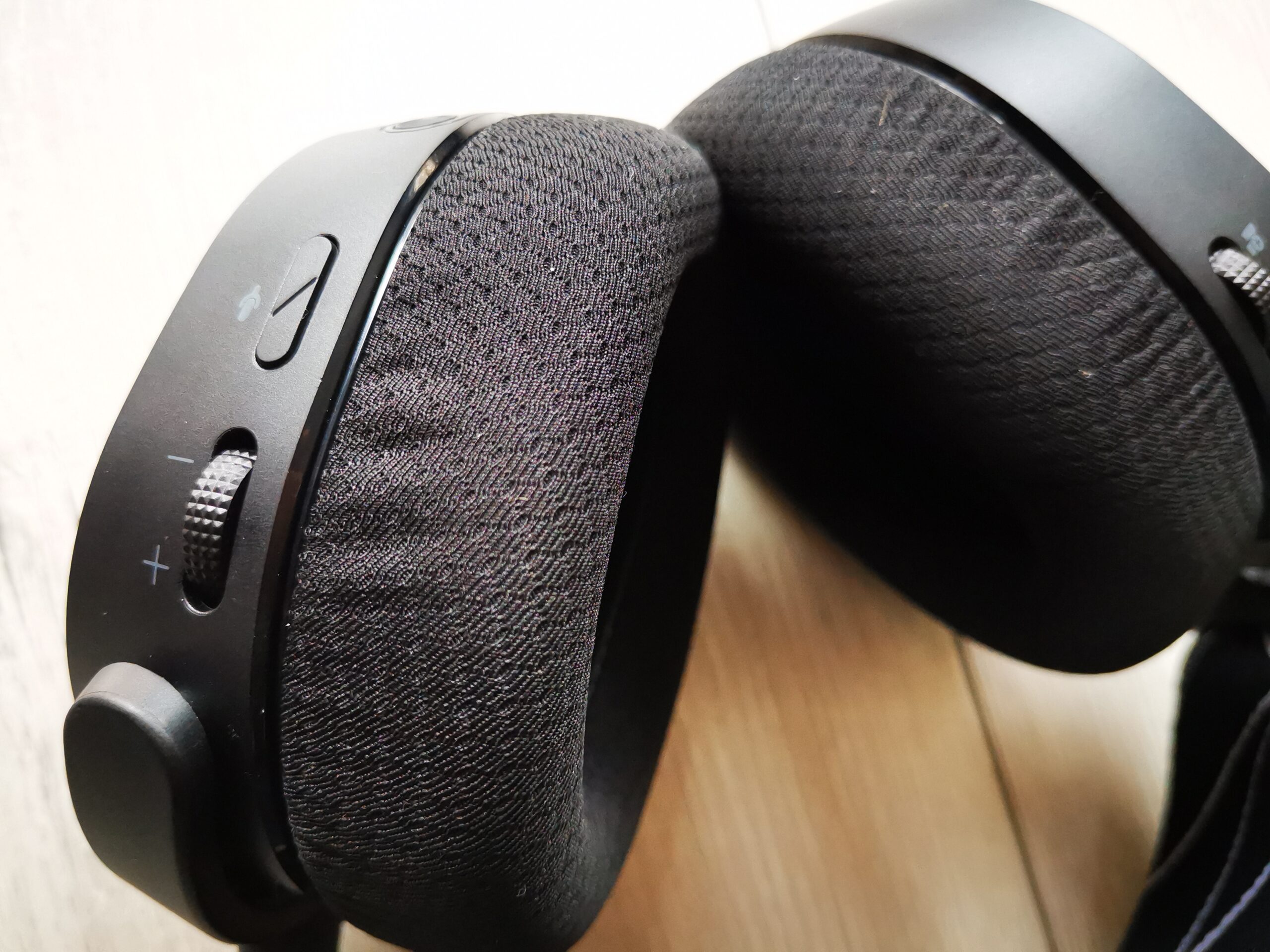 As the main controls are placed on the right cup, the retractable noise-canceling microphone is located on the left alongside the ChatMix control dials. As with the microphone on the Arctis 7X – it emits a red light to notify users that it has been muted (via the mic mute button).

Whereas the Arctis 7X (and 7P) connects wirelessly via a 2.4 GHz USB-C dongle, the Arctis 9 connects through a regular USB wireless transmitter, which can be set to either PC or PlayStation mode. The dongle also houses the ‘Game In’ jack and ‘Line Out’ Jack for connecting additional devices and connectivity with speakers. 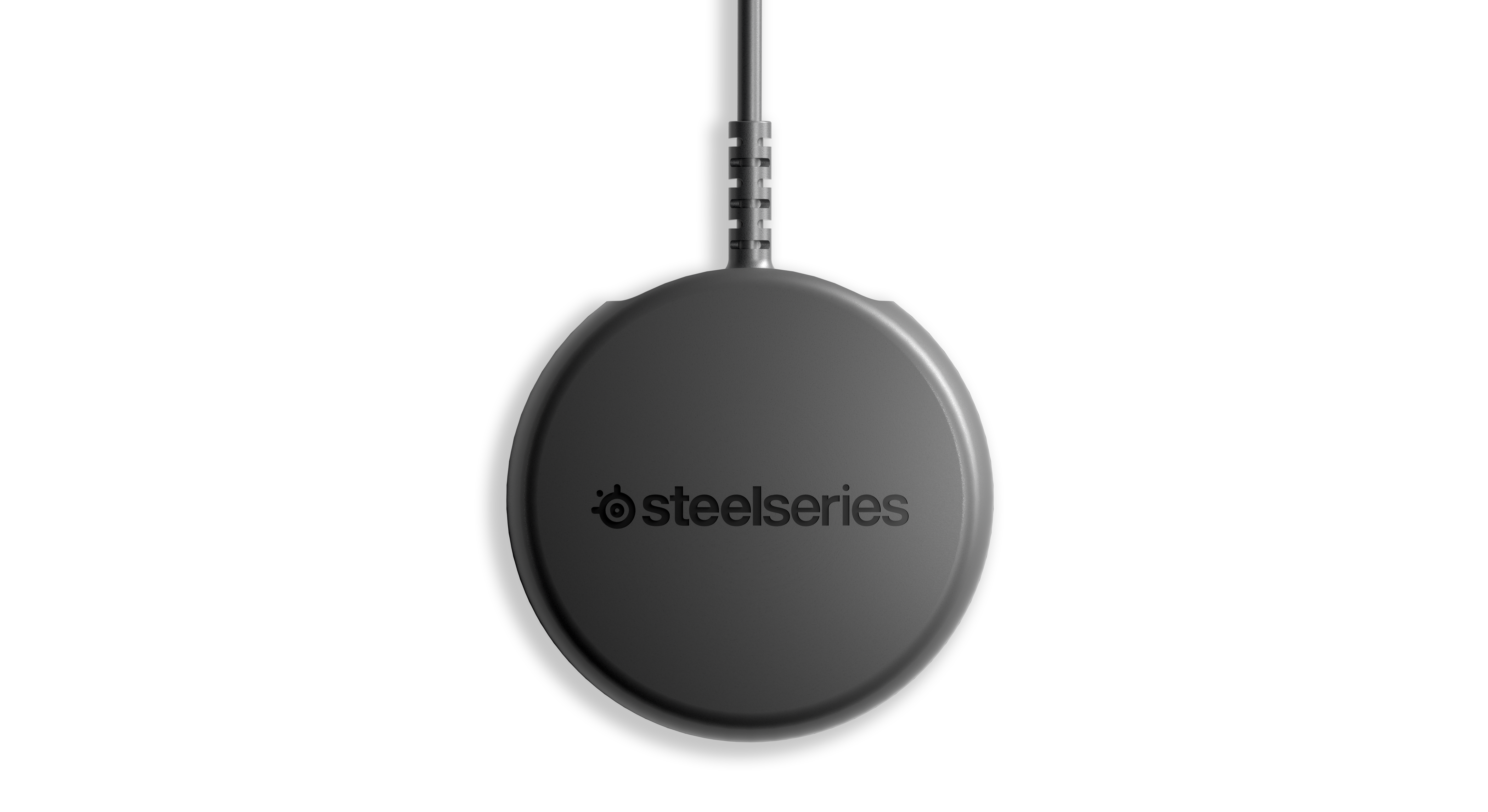 Sharing the same design and materials, both the Arctis 7X and Arctis 9 are really comfortable to wear. As with the Arctis Pro Wireless, there’s no adjustment needed here – just put the headset on, and the Ski-goggle headband auto-adjusts to the size of your head. While I haven’t experienced any strain from the headbands, I do have to point out that the Arctis 9 is slightly heavier than the Arctis 7X (381 vs 352 grams), and during head movement, the Arctis 7X felt a bit more tightly secured to my head.

While the battery life is outstanding for both offerings, the Arctis 7X reigns supreme overall. SteelSeries boasts that the battery lasts up to 24 hours on a single charge, but this is likely a safe estimate, as the battery inside my sample lasted up to 27.5 hours. The same applies to the Arctis 9 – SteelSeries has listed this headset with 20-hour battery life, but it took me around 22 hours to fully drain the battery. As can be expected, making use of the Arctis 9’s 2.4Ghz and Bluetooth connection simultaneously results in a considerably shorter battery life.

As mentioned above, the Arctis 7X and 9 feature the same speaker drivers as the Arctis 1 Wireless, and as written in my review of the latter, the 40mm Neodymium drivers offer a clear, rich sound. This doesn’t only apply to games, but to music as well. While the drivers are able to strike a great balance between ambiance, vocals, and impacts, the bass does lack a certain punch. This, however, is quite common with gaming headsets and prevents the lower-frequency sounds from drowning out the mids and highs, including sounds like footsteps, voices, and vocals.

While not necessary at all, the sound can be tuned through the SteelSeries Engine 3 software, allowing users to set and adjust different EQ presets – some of these enhance bass, while others focus on voice or vocals.

Unlike the Arctis 7X, the Arctis 9 offers DTS 2.0 surround sound for PC users, enabling additional surround settings in the Steelseries Engine. Aside from the surround sound options, the EQ settings for both headsets can be saved and used on other platforms. This works really well and allows users to tweak their audio experience to their liking.

It should be noted that while Arctis 9’s DTS Surround Sound settings won’t work on PS5, SteelSeries has confirmed that both the Arctis 9 and Arctis 7X/P will work with Sony’s new 3D audio tech.

As for microphone performance – as with most headsets, don’t expect sound quality on par with a dedicated microphone, but it’s pretty good. Voices are clear and the noise-canceling mic does a good job at filtering out background noise.

What would happen if the amazing Arctis 1 Wireless and the already splendid Arctis 7 decided to have a baby? Exactly – a love child in the form of the Arctis 7X. SteelSeries’ offering is simply the best multiplatform wireless headset that is currently on the market. As a matter of fact – I haven’t come across any other wireless headsets that are compatible with Xbox, PlayStation, PC, Android, and the Nintendo Switch in portable mode. Those playing on multiple devices simples can’t go wrong with the Arctis 7X.

As for the Arctis 9 – with its $200 price tag, SteelSeries has positioned this one just between the Artic 7X/P and the considerably more expensive Arctis Pro Wireless. While less versatile than the Arctis 7X, it does offer high-fidelity audio as well as BlueTooth for listening to two separate audio sources.

Does this added BlueTooth functionality alongside its DTS 2.0 Surround Sound on PC warrant the extra $50.00 USD? Personally, I would say no, but for PC and PlayStation gamers looking for a solid, great performing wireless headset that also packs BlueTooth connectivity, the Arctis 9 is a great deal.

Unfortunately, the design of the website doesn’t allow me to individually rate the Arctis 7X and Arctis 9. As such, I’ve given both headpieces a solid 8.5 – the 7X, as well as the 9, are great performing and comfortable wireless gaming headsets, each in its own price segment.

Review units provided by the manufacturer.

SteelSeries’ latest offerings are both solid performing and comfortable headsets with the Arctis 7X simply being the best multiplatform wireless headset currently on the market. The Arctis 9 is more geared towards PC and PlayStation players, and while it lacks the great versatility of the 7X, it’s a great headpiece that also offers Bluetooth connectivity slightly below the $200 price segment.