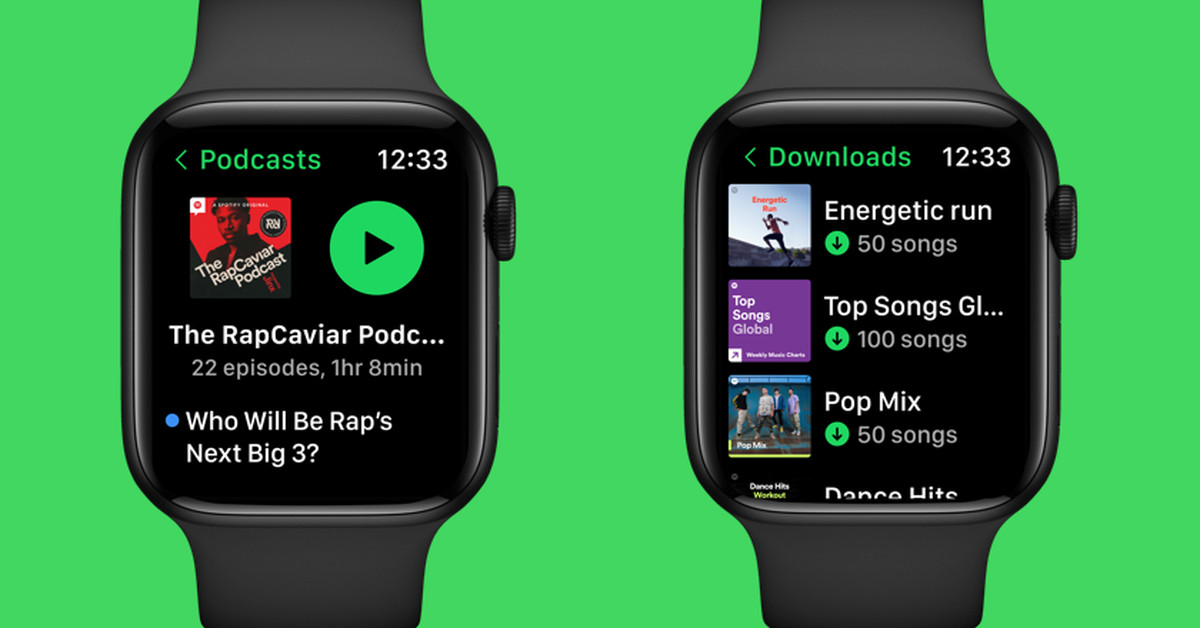 In a blog post today, Spotify shared details of a revamped Apple Watch app that makes improvements to usability and offline playback. It also adds more visual polish with bigger album art and new animations. “You’ll be able to more easily browse and choose your favorite music and podcasts in Your Library, as well as more quickly download music to listen offline from the watch itself,” the post reads. “There’s also a new sleek design with larger artwork, animations, and added functionality—like swiping to like a song.”

The post also highlights other devices on which Spotify has recently become available. The streaming music service can be used within the ambient mode / screensaver on Amazon’s latest Fire TV QLED televisions, letting subscribers explore recommendations or “flick through albums, songs, and playlists using the remote control.” Spotify has also brought its Spotify Tap shortcut to Meta’s Ray-Ban Stories sunglasses. This lets you immediately start playing music on your phone by tapping and holding on the side of the glasses; many earbuds and headphones now offer the Spotify Tap feature as well.

Spotify’s latest blog post makes no reference to Spotify HiFi — the service’s long-delayed lossless streaming tier that was announced 625 days ago — or rumors that the company is contemplating a more expensive “Platinum” plan that could cost $19.99 per month. As Amazon Music has shown this month, there are reasons to proceed carefully with potential changes to the service: Amazon’s decision to broaden the catalog of music available to Prime customers has been drowned out by complaints from people outraged over losing on-demand playback capabilities. The version of Amazon Music included with Prime now forces subscribers into shuffle mode and has made it more difficult to hear specific songs using the app and Amazon’s Alexa voice assistant.

Spotify notes that you’ll need the latest version of its iOS app to get the refreshed Apple Watch experience — so it sounds like that update has been approved at least. The same couldn’t be said last month when Spotify and Apple again got into a public spat over App Store policies. Spotify accused Apple of hindering its newly launched audiobooks initiative but ultimately released an update that adhered to Apple’s rules.