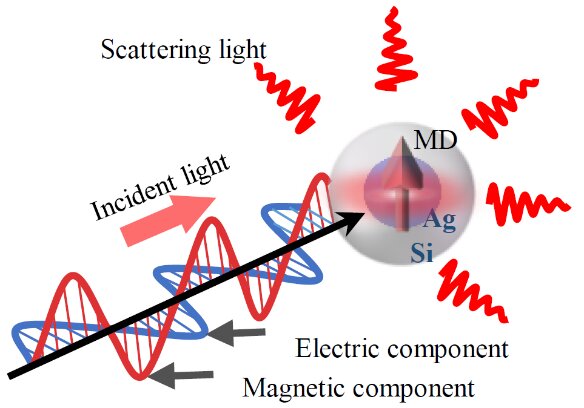 Moreover, photonic analogs of magnetic Skyrmions were proposed and demonstrated recently in both 2D and 3D forms. The deep-subwavelength features of spin structures provide novel tools for optical metrology, including high-precision displacement sensing and monitoring of magnetic domains.

In a new paper published in Light: Science & Applications, a team of scientists led by Professors Luping Du and Xiaocong Yuan from Shenzhen University have developed a unique anapole probe to measure the photonic spin structures dominated by magnetic fields. Their paper, “Measuring the magnetic topological spin structure of light using an anapole probe,” indicated that their proposed methods could be valuable in advancing spin photonics.

The previous Skyrmion structures of light were observed in surface plasmon polaritons with electric fields dominating their wave properties. Many approaches have been proposed to map the electric-field distributions at near field, including fluorescence imaging, photoemission electron microscopy and near-field scanning optical microscopy (NSOM) with fiber probes or nanoscatters.

In addition to the electric part in optical spin, the magnetic part is essential for transverse electric (TE) modes (H-type waves). Although several near-field mapping techniques have been developed for characterizing the magnetic fields, either using an NSOM probe with specific apex or high refractive index nanoparticles, they succumb to inevitable influences from the electric field.

It would affect the vector properties of the measured magnetic field and impair the system’s robustness in characterizing the topological spin properties associated with the magnetic fields. The anapole mode of nanoparticles with pure magnetic field response might be a great solution. It has drawn much attention to near-field optics and nano-optics.

The researchers proposed a unique magnetic probe with an anapole mode (hereafter named the anapole probe). It would help measure the topological spin structures of evanescent waves governed by magnetic fields. The probe comprises an Ag-core and Si-shell nanosphere, for which the excited electric dipole and toroidal dipole modes experience destructive interference.

The anapole forms the anapole mode and suppresses scattered radiation caused by electric fields. This anapole mode overlaps with a strong magnetic dipole resonance, which guarantees a high detection efficiency of the magnetic field.

A home-built near-field scanning system utilizing the anapole probe was assembled and with which the magnetic topological spin structures of the TE mode were characterized for the first time, including individual photonic Skyrmions and Skyrmion/Meron lattices.

With high sensitivity and precision, the proposed method may become a valuable tool for studying the underlying physical processes related to the magnetic field components of light and facilitate the development of applications, including data storage, metrology, optical tweezers, and chiral nanoscopy.

Netflix Is Rolling Out Its Ad-Supported Tier Across Different Markets; Here Is the List of Shows You Won’t Be Able to Watch in This Plan

Roku’s Streaming Stick 4K hits a new low of $25, plus the rest of the week’s best tech deals