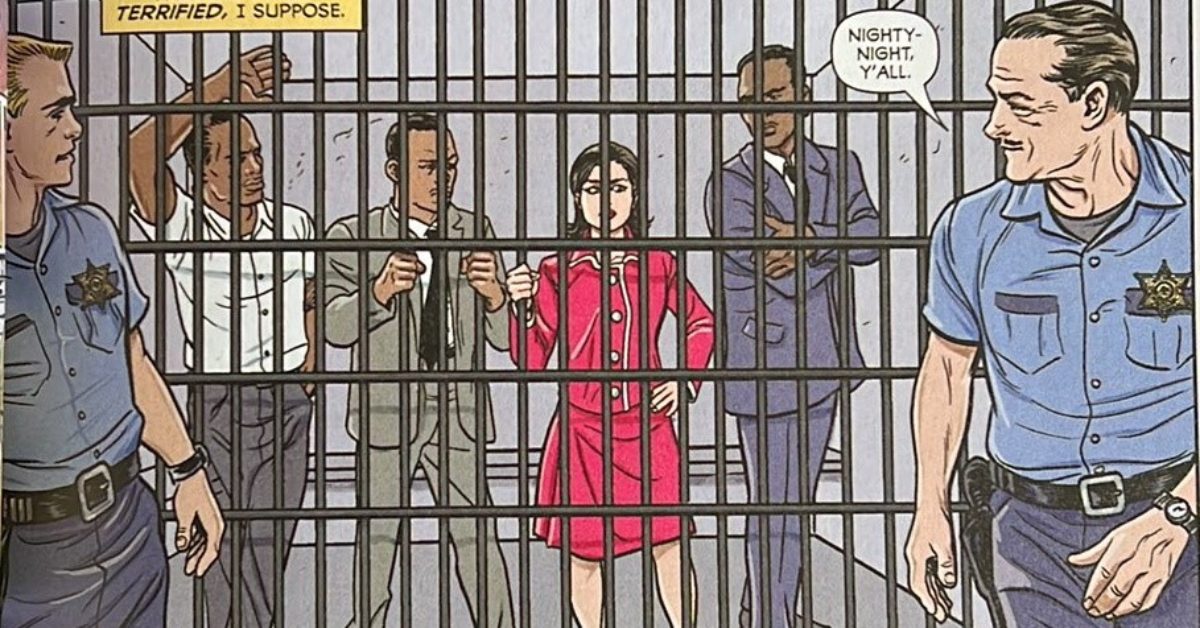 Once upon a time, Superman: Space Age would have been part of DC Comics 5G and the new DC Comics Timeline that would have seen Clark Kent become Superman in the nineteen sixties. That was all done away with, but you can see the vestigial aspects in Superman & The Authority, and now from Marc Russell and Michael Allred who have taken it further, probably than they may have been allowed at the time – now that it is out of continuity and supposedly doesn’t matter. But we know that everything happened and everything matters. So a story of Superman, Clark Kent and Lois Lane in the nineteen sixties can afford to be a little more meta. Such as with Lois Lane, talking to jailed Freedom Riders, including John Lewis who served in the United States House of Representatives for Georgia’s 5th congressional district from 1987 until his death in 2020 and who, as a young man, was a prominent civil rights activist and who led the first of three Selma to Montgomery marches across the Edmund Pettus Bridge. And she gets to talk to him about comic books.

Freedom Riders such as Lewis were civil rights activists who rode buses to challenge the non-enforcement of the Supreme Court decisions that segregated public buses were unconstitutional. They were frequently arrested, beaten and jailed. In 2013, Lewis became the first member of Congress to write a graphic novel, with the launch of a trilogy titled March, a black and white comics trilogy about the Civil Rights Movement, told through his own perspective, written by Lewis and Andrew Aydin, illustrated and lettered by Nate Powell.

Lewis cited the influence of a 1958 comic book, Martin Luther King and the Montgomery Story, on his decision to adapt his experience to the graphic novel format. In 2018, Lewis and Andrew Aydin co-wrote another graphic novel as a sequel to the March series entitled Run. The graphic novel picks up the events in Lewis’s life after the passage of the Civil Rights Act, drawn by Afua Richardson. And, in this issue, crossing over with Superman… of course it could have been worse. Remember everything happened, everything matters… including Superman quoting John lewis decades later…

SUPERMAN SPACE AGE #1 (OF 3) CVR A MIKE ALLRED
(W) Mark Russell (A/CA) Mike Allred
Meet Clark Kent, a young reporter who just learned that the world will soon come to an end (Crisis on Infinite Earths) and there is nothing he can do to save it. Sounds like a job for his alter ego…Superman! After years of standing idle, the young man from Krypton defies the wishes of his fathers to come out to the world as the first superhero of the Space Age. As each decade passes and each new danger emerges, he wonders if this is the one that will kill him and everyone he loves. Superman realizes that even good intentions are not without their backlash as the world around him transforms into a place as determined to destroy itself as he is to save it. Uniting the critically acclaimed writer Mark Russell (One-Star Squadron, The Flintstones) and Eisner-winner Mike Allred (Silver Surfer, Bowie: Stardust, Rayguns & Moonage Daydreams) for the first time, this series promises fans an unforgettable journey through U.S. history and culture starring our beloved characters. Retail: $9.99 07/26/2022