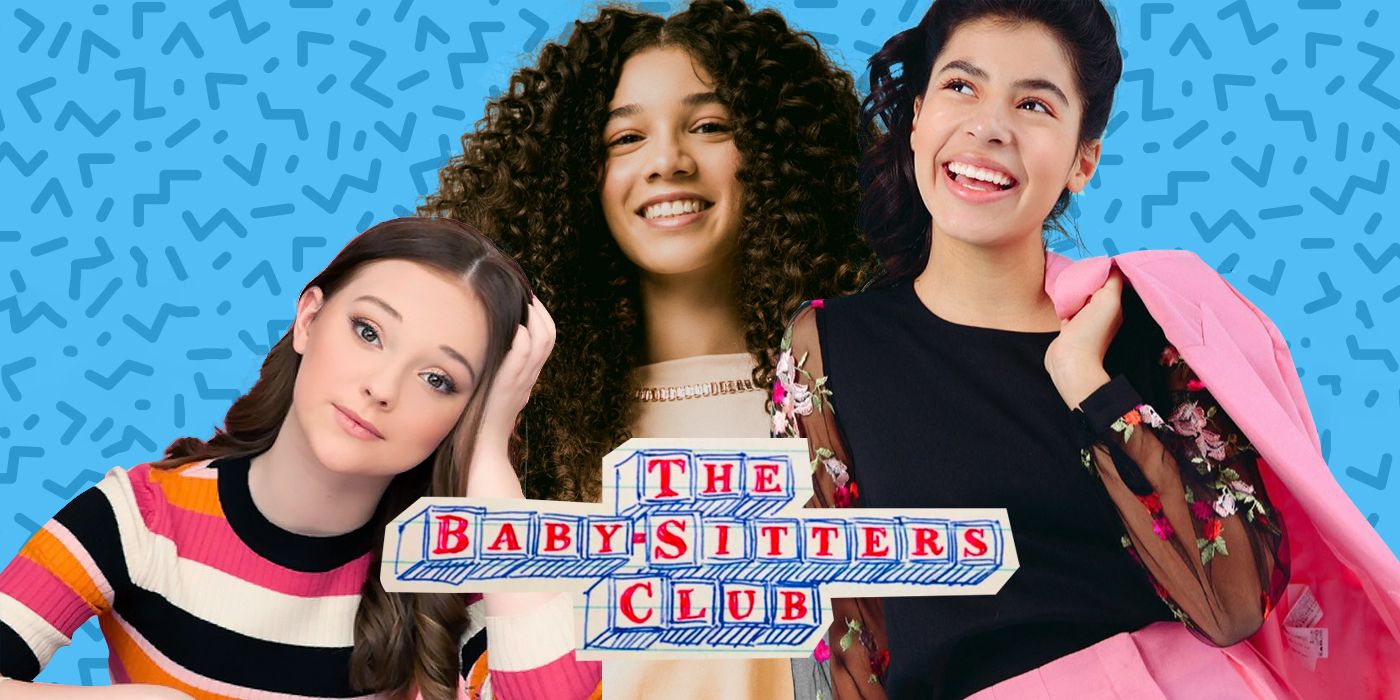 From series creator Rachel Shukert and based on the best-selling book series by Ann M. Martin, Season 2 of the Netflix original series The Baby-Sitters Club tells the story of the friendship and adventures of teenagers Kristy Thomas (Sophie Grace), Mary Anne Spier (Malia Baker), Claudia Kishi (Momona Tamada), Stacey McGill (Shay Rudolph), Dawn Schafer (Kyndra Sanchez), Mallory Pike (Vivian Watson) and Jessi Ramsey (Anais Lee). As they expand their babysitting business and their personal journeys evolve, the one thing they know they can always count on is each other.

During this 1-on-1 interview with Collider, which you can both watch and read, co-stars Grace, Baker and Sanchez talked about the coolest thing about being a part of this show, how much they identify with their own characters, the ups and downs of family, what they’d still like to explore, and what they most enjoy about working with this ensemble cast.

Collider: Thank you for talking to me about this. I love this show on two levels. I get the nostalgia factor from reading the books when I was younger and it also proves that good stories and good characters are universal, no matter your age. What has it meant to you guys to get to be a part of The Baby-Sitters Club? What’s the coolest thing about being a part of this world and doing this show?

MALIA BAKER: It’s such an iconic series that we’re all able to portray and I feel like we all relate to our characters, in some way. The most magical part about The Baby-Sitters Club is that everything is so relatable, whether that’s the situations, the characters, and the things that we all get to do together or as individuals. It’s such an inspiring piece and it’s so empowering, as young women entrepreneurs going through this business, but also in personal lives as well. It’s a dream come true. I still can’t believe, to this day, that it’s not just a home movie that I made with my best friends. It’s out there. It’s on Netflix. It’s insane. I’m just grateful for the experience, overall.

SOPHIE GRACE: Just being with the girls and doing what I love, it’s indescribable. It’s like a dream come true. All the hard work of chasing your dream, it finally pays off and you’re on the set with these wonderful people surrounding you. It’s like a really big group hug. It’s really nice.

KYNDRA SANCHEZ: Definitely getting to do what you love with the people you love is truly a dream come true. Playing Dawn is really great because we have so many similarities. And also, getting to portray a character that kids can relate to and find similarities in. That goes for all of the characters. Also, playing Dawn as a Latina girl — when I grew up, I didn’t have too many people on screen that I could have looked up to. I think it’s really special that I get to be that person that I never really had to look up to. I hope that I’m an inspiration to others and I hope that I spread a message that, if I can do it, you can do it.

Kyndra, what was it like for you to join this show and take on this role? What were you most nervous about and what made you feel most reassured, once you got on set?

SANCHEZ: Everyone was super supportive and kind. I remember the first scene — doing something new can always be a little scary, but with the help of your friends, you can always get through it. It was just wonderful, really connecting with all the girls. We built a wonderful relationship. It’s truly been a dream, filming.

Sophie, what’s it like to play the leader of this group? Is that a role that you fit into naturally? What sort of leader is Kristy in Season 2?

RELATED: ‘The Baby-Sitters Club’ Creator on Season 2, the Show’s Future, and Why She Wants Paul Rudd to Play Kristy’s Bad Dad

Malia, what’s it like for you with Mary Anne? Things are changing a little bit with her family, so what is that like for her? How does she feel about what’s going on with that situation?

BAKER: Mary Anne and Dawn wanna be stepsisters so much, it’s crazy. We go to such lengths and such extents to become stepsisters. There’s always that tease of, “Is it finally gonna happen? Are they gonna announce that they’ve just proposed, or is it something else?” You get to see that throughout the second season and throughout the Dawn’s and [Mary Anne’s] episodes, in particular. That was really fun to be able to betray. In the first season, Mary Anne had a huge arc, and in the second season, that progresses even further. So, I’m excited for [viewers] to see that sense of relate-ability and those awkward moments. This is middle school. There’s gonna be awkward moments. There’s gonna be moments where it’s so cringy that you wanna hide yourself. So, just having that comfort show for people to watch, you can go back and lean on it. At the end of the day, you get through it as a team. I think that’s the most magical part.

Kyndra, Dawn and Mary Anne definitely have some sisterly disagreements, but how would you say that brings them closer together, once they work through it?

SANCHEZ: I have a strong feeling that whenever friends go through conflict and they figure it out and they get through it, that just shows how strong of a friendship they really have and how strong of a bond they have. I think it’s really important that Mary Anne and Dawn get through all of the conflicts that they have. At the end of the day, that just makes them stronger together.

Sophie, your character has some ups and downs this season. While Kristy has a family moment in the last episode that just broke my heart, she then also has a very happy moment that makes up for that. What did you most enjoy about her journey this season and where she ends up, especially when it comes to her family?

GRACE: I can’t give any spoilers, but I think Kristy ends up right where she belongs and right where she always kind of needed to be. It’s such a hard for her, and then it’s such a sweet moment. It’s a lot going on, but I’m happy for Kristy.

Are there things that you guys still have on your own personal wishlist for your character, that you’re hoping to still get to do or explore with them, in future seasons?

BAKER: There’s over a hundred books, so I feel like there’s so much room to play with them. The writers have done an amazing job in the first two seasons, so who knows what will happen with the third, the fourth, and the fifth, or whatever seasons there are. I wish I could go on for years. BSC will forever be something that I hold close to my heart. But if you really [wanna know], I would love to have a cat in the next season. There’s something about Tigger, that Mary Anne has in the books. I would just be so immensely grateful, if I could just play with a kitten in my free time. That’s all I have to say. Submit answer and done.

SANCHEZ: I second this. If Mary Anne has a cat, Mary Anne is mostly with Dawn, and Dawn loves animals and the environment. It would definitely be a fun time, playing off the cat with Mary Anne. I would also say, if you’ve seen Season 1, you know that Dawn’s parents are divorced and I would love to see her father and her brother come and visit her from California and spend some time with her. I know that she struggles and she definitely misses them, at many times.

GRACE: I third Malia’s cat thing because who doesn’t want a cat on set. I love animals. But for Kristy, personally I think it would be really cool to include Kristy’s Krushers in the next upcoming potential seasons.

What have you guys most enjoyed about getting to work with each other and learning from such a different diverse group of girls?

GRACE: Working with the girls is the best. Honestly, they’re the best girls you’re ever gonna meet. They’re all so strong and they’re so unique. It’s just really cool to watch us all grow together.

BAKER: A hundred percent, yeah. This is a group of young, diverse, entrepreneurial young girls that are going through a business struggle, but are also going through struggles in their own teenage lives. This is something that’s super relatable. With Mary Anne, being that BIPOC character that people can look up to, it’s just so inspirational aspirational. I didn’t have that person that I was able to look up to growing up, especially with curly hair. That one is the most important thing for me. Throughout the first season, we see her with her braids for the first four episodes, and then she finally lets it down and we’re able to see her struggles. There was this one team meeting where I got to include a head wrap scarf, which I usually wear to bed. I got to include my own while I was on set, just to be more accurate for young girls that have curly hair, especially black hair. It’s just so amazing to be able to incorporate those moments because you can’t be what you can’t see. I think that just stands for whatever we do in this club. It’s just so relatable.

KYNDRA: I think that each of the girls struggle with something, but they always overcome it. I also think that it’s really important for people to find similarities and even differences. Each of the girls is so empowering and confident in who they are, and that is also a really important message to spread all around, to kids and people of all ages to not be afraid to be yourself and to do whatever you wanna do and be whoever you wanna be, no matter what anyone thinks of you.

The Baby-Sitters Club Season is available to stream now on Netflix.

Tom Holland Says ‘Spider-Man: No Way Home’ Was Treated Like “the End of a Franchise”

If you ever see these characters again, Holland said, “you’d be seeing a very different version.”

Christina Radish is a Senior Reporter at Collider. Having worked at Collider for over a decade (since 2009), her primary focus is on film and television interviews with talent both in front of and behind the camera. She is a theme park fanatic, which has lead to covering various land and ride openings, and a huge music fan, for which she judges life by the time before Pearl Jam and the time after. She is also a member of the Critics Choice Association and the Television Critics Association.