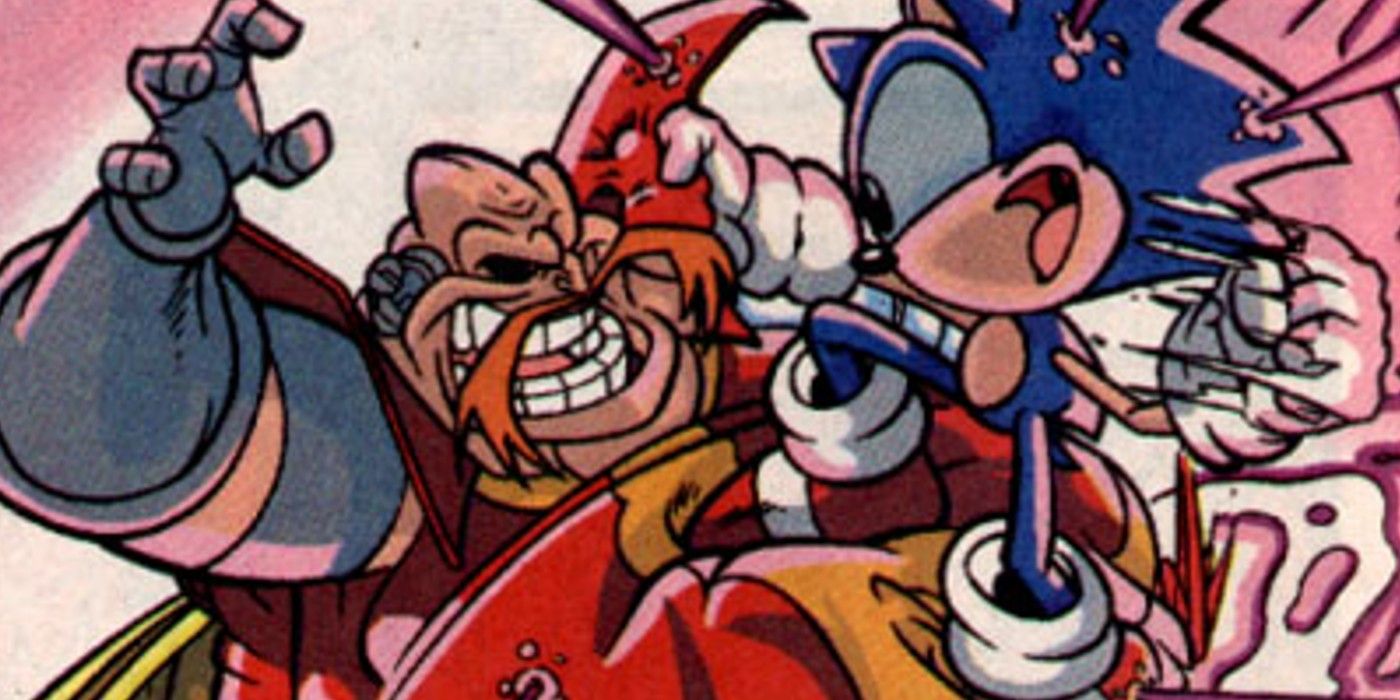 In Sonic the Hedgehog #50, the Blue Blur actually kills Dr. Robotnik upon the cancellation of its main influence, the Saturday morning cartoon.

In the comics, Sonic the Hedgehog doesn’t just foil Dr. Robotnik’s dastardly schemes by busting up his inventions. The Blue Blur targets his longtime foe directly, and one of his earlier attempts is so successful that Sonic actually kills him in issue #50, the final installment of the EndGame arc.

The day Sonic becomes a cold-blooded killer follows one of Robotnik’s most devious schemes where he framed Sonic for murdering his girlfriend Princess Sally. So, naturally, the Blue Blur is more than upset, especially as he still believes she’s dead (since she fell to her supposed doom from a remarkably high building). Additionally, Sonic’s friends not only arrest him but upon his escape, pursue him relentlessly until the truth is finally exposed.

Related: Sonic The Hedgehog Was Framed For Killing His Girlfriend

When Sonic confronts Dr. Robotnik during their fateful face-off, the villain reveals he’s learned the location of Knothole Village and targets Sonic’s hideout with his impressively named Ultimate Annihilator. But during their scuffle, Sonic hits his arch-nemesis so hard that he also damages Robotnik’s ultimate weapon, causing it to explode and envelope both the hedgehog and Robotnik. Later, readers learned that Robotnik’s lackey and nephew, Snively, altered the weapon’s programming to only affect Robotnik, hence why Sonic survives, why Robotnik perishes and why Knothole is instead thrust into its own zone that exists three hours in the future.

In an exclusive interview with Screen Rant, lead writer Ken Penders reveals that EndGame was created as a result of the cancellation of the Sonic the Hedgehog Saturday morning cartoon that influenced the series and its more light-hearted counterpart.

Luckily, a combination of the Knuckles comic spin-off and a Sonic special issue later performing well allowed the main book to continue. But as Penders also confirmed with Screen Rant, Dr. Robotnik was now dead. So Sonic later contends with Robo-Robotnik from an alternate reality and then the next Dr. Eggman, who was originally just one out of an assortment of other robotic bodies lying dormant inside a secret basement, as revealed in issue #75. There, a life spark mysteriously enters one of these bodies who later refers to himself as Dr. Eggman. Although a completely different entity, Eggman would later carry out Dr. Robotnik’s plot and destroyed Sonic’s home in issue #175, almost breaking the hedgehog’s spirit entirely.

Although the product of an ostensibly doomed series, Dr. Robotnik’s death at the hands of Sonic is one of the darker moments in Archie Comics’ already more mature series, a tone that’s currently lacking in IDW Publishing’s rebooted continuity. It’s also important to note that a host of other characters die in the Archie’s comic series, all of which weren’t prompted by the prospect of the series folding, though Ken Penders did divulge to Screen Rant that he and his staff always operated under the assumption that every issue could be their last. Dr. Robotnik‘s death not only gave Archie’s series a darker tone but further complicated the overall universe by bringing back both old and new villains who all share a vested interest in destroying Sonic the Hedgehog.

Next: Ken Penders Interview: Sonic Comic Writer To Finish What He Started

Finally, some good news for Quibi

Action-JRPG Tales of Arise has already shifted one…

Here’s how much mobile data you use each…

Evidence of Fur and Leather Clothing, Among…