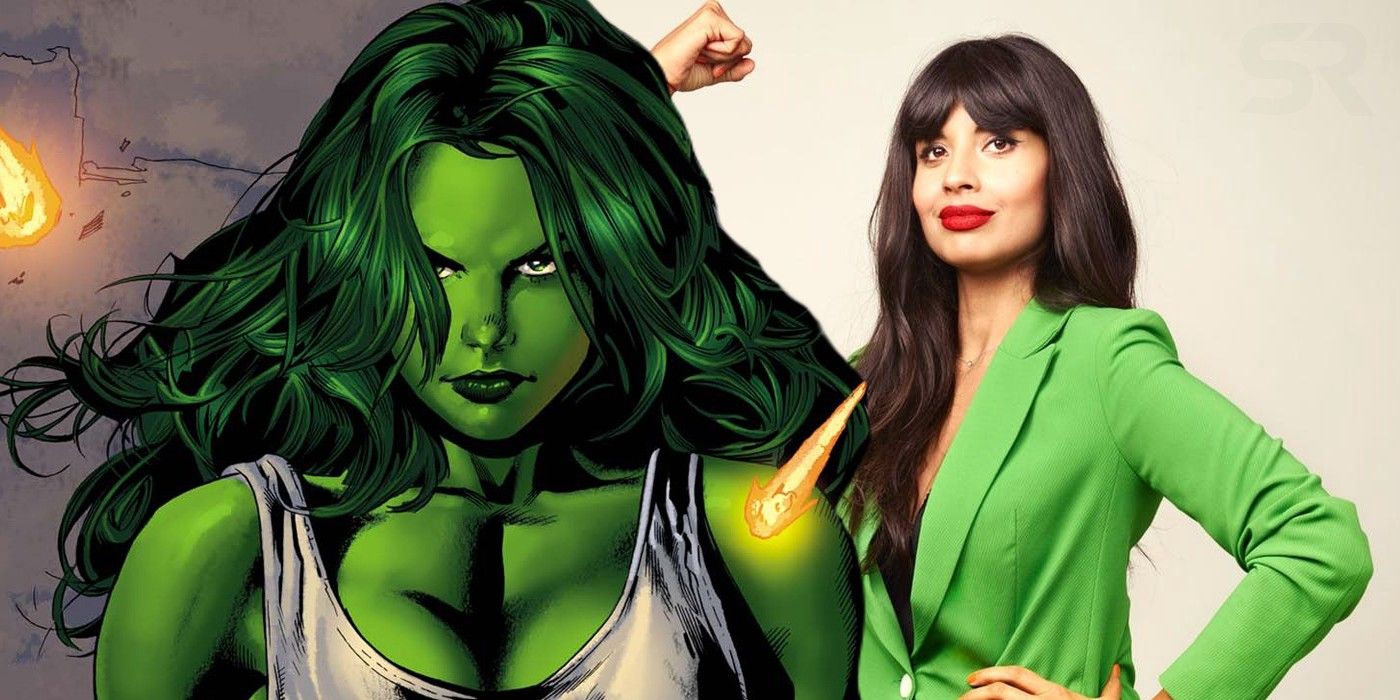 Titania actress Jameela Jamil hypes up Disney’s upcoming She-Hulk series on social media, saying: “I cannot believe I get to do this bloody job.”

She-Hulk‘s Jameela Jamil has taken to Twitter to hype up the anticipated Disney+ series. It was revealed that the former Channel 4 host turned actress, best known for her role as the entitled Tahani Al-Jamil in The Good Place, had joined the series earlier this month. She has since been vocal about both her role in the show and her preparations for it, previously sharing stunt-videos and photos of herself training for She-Hulk on her Twitter account. Jamil is set to portray Titania in the series, a supervillain with incredible strength who is regular enemy of She-Hulk in the comics.

Jamil joins Tatiana Maslany, who will play She-Hulk AKA Jennifer Walters, the cousin of Bruce Banner who receives her powers through a blood transfusion from her cousin. Unlike Banner, Walters is able to retain her intelligence, personality, and emotional control when she ‘hulks-out’. She-Hulk has been a member of both the Avengers and the Fantastic Four in the comics, and often serves as an attorney for various superheroes. Rounding out the cast are Mark Ruffalo, who will return as Banner, as well as Renée Elise Goldsberry, Josh Segarra, Ginger Gonzaga, and Tim Roth who returns as Abomination from The Incredible Hulk and the upcoming Shangi-Chi.

Related: Marvel: Why She-Hulk’s Movie/TV Rights Are Different To Hulk’s

Taking to Twitter, Jamil expressed her excitement to be working on the project, adding that she “cannot believe [she gets] to do this bloody job.” She also claimed that the “show is SO fun” to work which is certainly promising for the series. Read Jamil’s full tweet below:

Man this show is SO fun. #Marvel I cannot believe I get to do this bloody job.

Jamil’s excitement is understandable, as audiences have been longing to see She-Hulk arrive in the MCU for many years now. It’s inevitable that the superhero would also bring her nemesis with her. Jamil seems the perfect casting for the role, in part owing to her height. She’s clearly committed to the role, regularly showing the training she is undertaking, which suggests a great deal of physical exertion is required for the role. Titania was created in 1984 by Jim Shooter, and originally appeared in the Secret Wars storyline. Since then she has been a primary rival of Walters, as well as a member of several supervillain groups including the Masters of Evil and the Frightful Four.

More recently Titania has become something of an anti-hero, fighting alongside heroes like Black Bolt. Considering the MCU’s recent tendency to keep villains around, it’s entirely possible that she may reappear in a possible second season in a more heroic role. Regardless, Jamil’s clear excitement to be involved in She-Hulk and the MCU is positive for fans of the MCU, and hopefully she will have the opportunity to reprise her role in future projects. She-Hulk is expected to complete filming in August before arriving on Disney+ at some point in 2022.

More: Why Is Wong Fighting Abomination In Shang-Chi?

Nico Marrone is a senior news writer for Screen Rant. He graduated from the University of Edinburgh with a Masters in Postcolonial Literature by combining his love of African literature with comic-books. He has previously served as the film editor for The Student and currently serves as the assistant theatre editor for The Wee Review.

When not geeking out about films and comics, Nico can be found spinning fire, running too many games of Dungeons & Dragons, and complaining about the Scottish weather.

How to Prevent Unknown Users From Adding You to WhatsApp Groups

Say Hello To the HEATHENS, The New Series From AfterShock Comics

BOOM! Dives Into Conspiracies with Regarding the…

TUDUM Netflix: Time, Cast, Schedule, and How to…