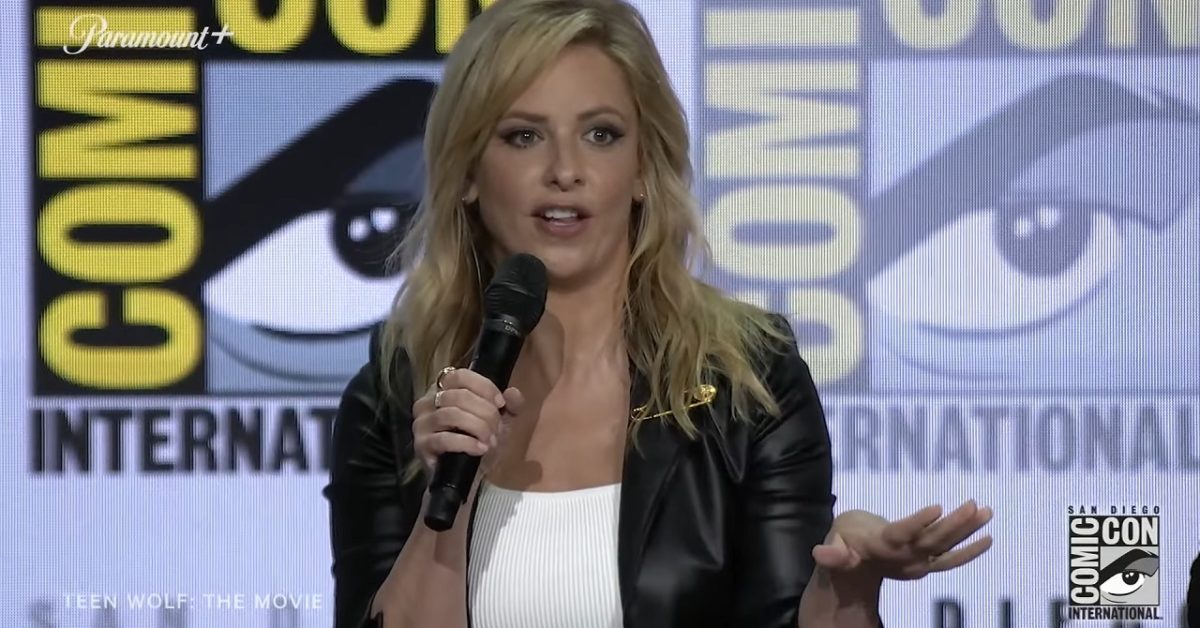 On the Main Stage on Friday night during New York Comic Con 2022 (NYCC 2022), the cast and creative team behind Paramount+’s Teen Wolf: The Movie and Wolf Pack will be descending upon NYC to offer news, previews, and more on both projects. So it only makes sense that Wolf Pack writer & executive producer Jeff Davis (Teen Wolf) and series star & executive producer & NYCC Looks would be checking in as they make their way to the mega-convention. And that’s exactly what they did, as you can see in the screencap below.

But that’s not all, because we also have some behind-the-scenes images that Gellar was kind enough to share on Instagram, along with a cool mini-teaser from the show’s account previewing the upcoming NYCC panel:

” I’ve been pitched once, twice, 2000 of these [types of shows]. Honestly, at first, I had no intention of saying yes [to ‘Wolf Pack’],” Gellar revealed during the TCA session. So what changed her mind? “When I read the script, it was the first time where my interest was so piqued. One of the beauties of ‘Buffy’ was the sort of metaphorical aspect of it. These real monsters were the metaphors for the horror of high school, and to me, that’s what made the show so important and why it stands the test of time. So when I read the script [for ‘Wolf Pack’], and I spoke to Jeff [Davis], we discussed the issues he wanted to tackle, mainly anxiety and depression among children, specifically having to do with their use of devices and the lack of connectivity. It’s something that I think about all the time, and it’s so prominent.” Of course, starring in a series that folks want to buzz about isn’t a bad thing, either- with Gellar adding, “But at the same time, I love water cooler shows. I want to be on a show that everyone’s talking about.”

Gellar plays arson Investigator Kristin Ramsey, a highly regarded expert in her field and no stranger to personal loss, brought in by authorities to catch the teenage arsonist who started a massive wildfire which may have also led to the reawakening of a supernatural predator terrorizing Los Angeles. Joining Gellar are Rodrigo Santoro (Westworld), Armani Jackson (Honor Society, Chad), Bella Shepard (iCarly, The Wilds), Chloe Rose Robertson (Wildflower), and Tyler Lawrence Gray (Our Town, Macbeth). Now here’s a look at that special moment from SDCC when Gellar surprised more than a few folks:

Based on the book series by Edo Van Belkom, Wolf Pack follows a teenage boy, Everett (Jackson), and girl, Blake (Shepard), whose lives are forever changed when a California wildfire awakens a terrifying supernatural creature. Wounded in the chaos of its attack, the teens are inexplicably drawn to each other and to two others, fraternal twins Harlan (Gray) and Luna (Robertson), who was adopted sixteen years earlier by a park ranger after another mysterious wildfire. As the full moon rises, all four teens come together to unravel the secret that connects them – the bite and blood of a werewolf. Davis and Gellar will serve as executive producers alongside Joe Genier, with Mike Elliott as co-executive producer for Capital Arts. Pilot episode director Jason Ensler will also executive produce. With production kicking off next week in Atlanta, Georgia, the series premieres on Paramount+ later this year (U.S., Canada, Latin America, the Caribbean, Australia, South Korea, Ireland, UK, Italy, Germany, Austria, Switzerland & France).