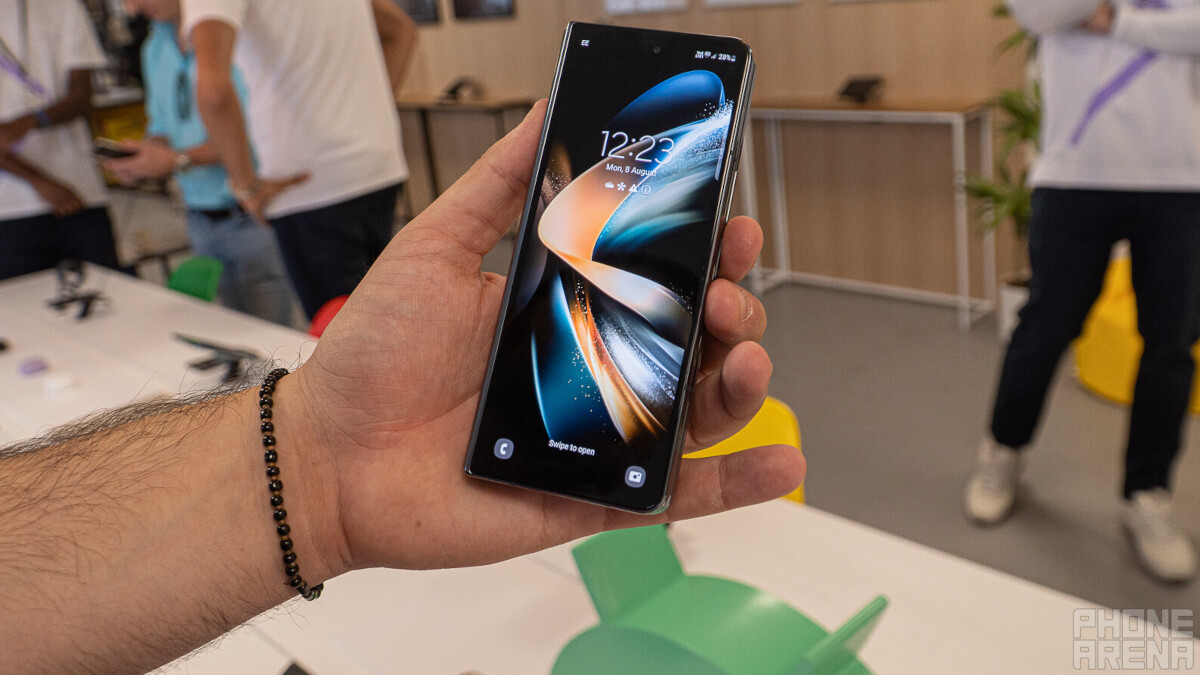 0
Share
Foldable fans, Samsung fans, and perhaps even some regular Android fans were excited today as Samsung unveiled the latest iterations of its Galaxy Z Fold and Galaxy Z Flip handsets. As is typical, Samsung played some videos to help it unveil the devices, some of which will end up edited and used as television commercials.
First up is a 35-second video called the Galaxy Z Flip 4: Pre-Order Film. The video shows all four color options for the phone (Bora Purple, Graphite, Pink Gold, and Blue). It also shows the external cover display showing the time and battery life percentage, being used as media controls to play streaming music, displaying the credit card in your digital wallet, and notifying the user of a Meet video call.
The Galaxy Z Flip 4 is a clamshell that opens vertically to become a 6.7-inch smartphone with a tall and thin display. The Galaxy Z Flip 3 was the best-selling foldable worldwide last year and Samsung is hoping to sell even more Galaxy Z Flip 4 units this year.

The video shows off a new taskbar and also gives you an idea about what you can do with the large screen such as opening two apps side by side, or playing a video game on the larger display. The video ends with the same tagline used in the video for the Galaxy Z Flip 4, “Unfold your world.”

The Samsung Galaxy Z Fold 4 and Flip 4 both starred in an introduction video that takes us behind the scenes with the off-screen announcer. While talking about the latter model, the off-screen announcer mangles the word pocketability leading the producer and others in the recording studio to pull the phone out of their pockets. Point taken, Samsung. The video notes that if you like a glossy finish, there are 75 different color combinations that you can choose from with the Bespoke edition of the Galaxy Z Flip 4.

The video continues to discuss FlexCam and how you can fold the device on a surface and record hands-free videos. It is optimized for Instagram and the social-media app has noted that “With FlexCam on Galaxy Z Flip4, you can fold the phone and place it on a surface freestanding to record hand-free videos. Now you can create Stories and Reels without a stand or tripod.”

The same video has a lot to say about the Galaxy Z Fold 4, “the productivity powerhouse.” As we noted before, Samsung has added a taskbar to the Fold which allows you to switch quickly between apps. And with the phone in Flex Mode, you can use the S Pen to take notes while on a video call.

With Aircraft grade Armor Aluminum frames and Gorilla Glass Victus+ protecting the outside glass, Samsung says these are the toughest foldables it has ever made. And thanks to the Snapdragon 8+ Gen 1 chipset, they are also the most powerful.
Samsung produced videos specifically for the Bora Purple variant of the Galaxy Z Flip 4, one for the Bespoke Edition, and another one for the Official Unboxing of the Bespoke Edition. In the box, you’ll find the Galaxy Z Flip 4, a C to C data cable, an ejection pin for the SIM card tray, and a Quick Start Guide. The video also shows some of the 75 color combinations possible and lists the specs for the cameras (12MP wide, 12MP ultrawide, and 10MP front-facing), the battery (3700mAh), and the screen (6.7-inch AMOLED, 1080 x 2640, 120Hz refresh rate).

Samsung produced an Untold Stories video for the Galaxy Z Fold 4. The video has Samsung patting itself on the back before explaining that the fourth generation of the Fold was designed to address consumers’ requests that the device be made lighter and stronger at the same time. By making improvements to the hinge and the display, Samsung engineers were able to give consumers what they wanted. The video shows precisely how Samsung was able to accomplish this.