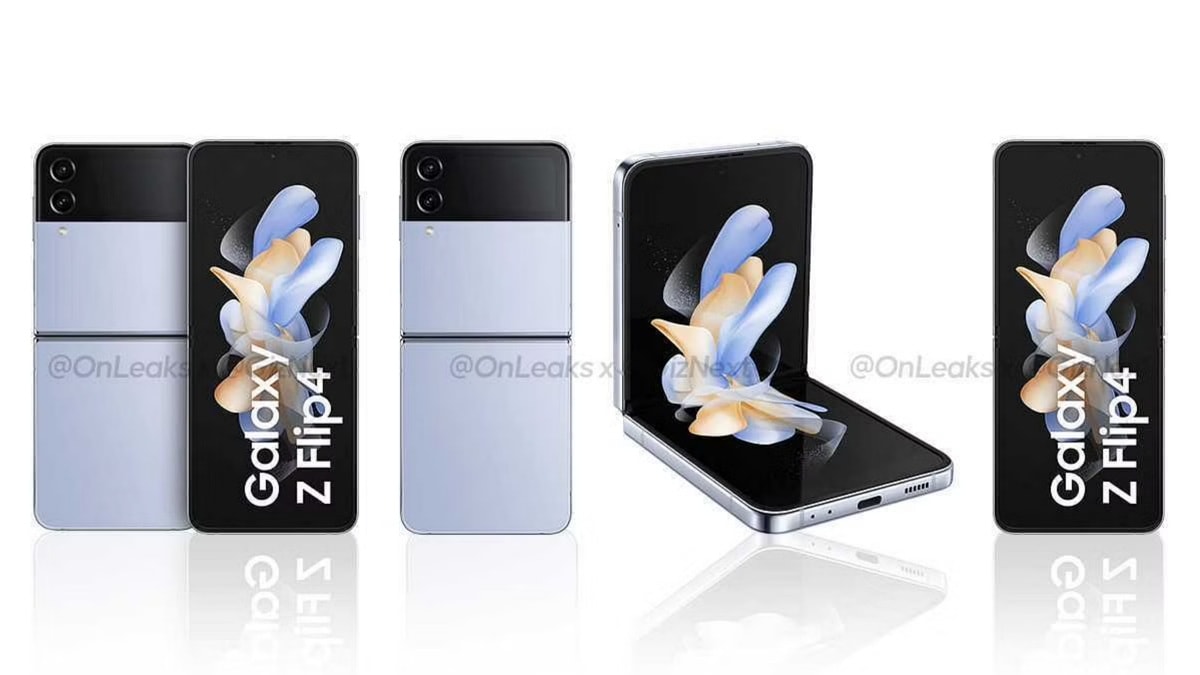 With the announcement of Samsung’s Galaxy Z Flip 4 and Galaxy Z Fold 4 smartphones expected at the company’s Unpacked event on August 10, the leaks have begun to intensify. While smartphone enthusiasts can expect the usual core hardware upgrades with Samsung’s foldable Z series, minor cosmetic changes have also shown up in past leaks. A tipster has now shared leaked press renders showing off the four official colourways of Samsung’s purported next generation Galaxy Z Flip series foldable smartphone.

Tipster Steve H. McFly (@OnLeaks) in collaboration with GizNext revealed what they claim to be the official renders of the upcoming Samsung Galaxy Z Flip 4 foldable.

Renders of the Samsung Galaxy Z Flip 4 have leaked in the past, but these are the first high-quality renders to surface online. The new images show the phones from every possible angle and in each of the four expected colour variants — Blue, Black, Beige and Lavender. While the official names of the colourways have not been mentioned in this new leak, past leaks point to them being called Blue, Graphite, Pink Gold, and Bora Purple.

It’s also easy to tell that the phone has grown thicker overall with flatter sides on the frame. The cover display also seems to have grown slightly bigger. What remains to be seen is how the phone folds shut and whether there’s still a gap where both halves meet. An older report on the design changes also point to a vertical layout for the rear cameras that are said to be protruding and are expected to deliver a better image quality. The placement of the volume rocker and unlock/Bixby button also remains the same in the new leak.

An earlier report also hinted at a Bespoke Edition of the handset that is expected to be unveiled at the event. The Bespoke Edition would have a similar concept of offering multiple colour combinations as with the Galaxy Z Flip 3, but would take things a step further by offering a 900 combination for interested customers (compared to 49 in the past).

The Samsung Galaxy Z Flip 4 is reportedly expected to arrive with Qualcomm’s latest Snapdragon 8+ Gen 1 SoC. A recent leak had revealed that it will be available in 8GB + 128GB, 8GB + 256GB and 8GB + 512GB storage options, with prices starting from EUR 1,080 (roughly Rs. 88,000). The phone is said to feature a 6.7-inch Super AMOLED display with a 120Hz refresh rate, along with a 2.1-inch Super AMOLED secondary display which is slightly bigger than the current Galaxy Z Flip 3 model.

Denial of responsibility! TechCodex is an automatic aggregator of the all world’s media. In each content, the hyperlink to the primary source is specified. All trademarks belong to their rightful owners, all materials to their authors. If you are the owner of the content and do not want us to publish your materials, please contact us by email – [email protected]. The content will be deleted within 24 hours.
Samsung Galaxy Z Flip 4samsung galaxy z flip 4 bespoke editionsamsung galaxy z flip 4 pricesamsung galaxy z flip 4 specificationsssamsung z flip fold 4 leaked renders colour options price specifications expected galaxy samsung
0
Share

Should Google make a Tensor Lite processor for its Pixel A series?

The best instant photo printer you can buy right now

GE has a new smart mixer that can shut itself off…