Samsung has been making smartwatches for roughly seven years now.

The company’s watch line was around for the birth and near-death of Android Wear/Wear OS and even launched a couple of years before Apple’s watchOS and the Apple Watch.

The South Korean tech giant started with the weird cuff-like Galaxy Gear, and now more than 10 iterations later, we have the Galaxy Watch 3 — Samsung, for some reason, skipped out on the Galaxy Watch 2.

The Galaxy Watch 3 improves on all aspects of the company’s previous smartwatches and somehow even beats out 2019’s Galaxy Watch Active 2 and the original 2018 Galaxy Watch, a pair of very solid wearables.

Thankfully, the Galaxy Watch 3 brings back the excellent rotating bezel, offers new features and comes in a beautiful ‘Mystic Bronze.’

If it’s not broken, don’t fix it

It’s also a tad lighter than the Galaxy Watch, which is a welcome change. I often get annoyed with heavy wearables because they quickly start to feel cumbersome on my wrist.

The bezel on 2019’s Galaxy Watch Active 2 is smaller than the Watch 3’s but the older wearable, unfortunately, lacks a physical rotating bezel. The rotating bezel on 2020’s Samsung smartwatch doesn’t have the same rigid texture as on the original Galaxy Watch, which is something I miss, but it still has that satisfying click whenever you switch to a new app.

The Galaxy Watch 3 features two buttons on its left side, which allow users to go back to the last page and return home. As you can see from the images in this review, I’m using the Watch 3 in ‘Mystic Bronze’ chassis, but the device also comes in ‘Mystic Black’ and ‘Mystic Silver’ depending on the size you choose.

The display on the Watch 3 is fine, but it’s a smartwatch, so I’m not looking at pictures on it or anything like that, even though users can do that if they want to. It also has an ‘always-on’ display similar to the Apple Watch Series 5 and Series 6, which I like because I’m able to take a glance at my watch to check the time and look at notifications, instead of always having to raise my wrist to get the screen to light up. 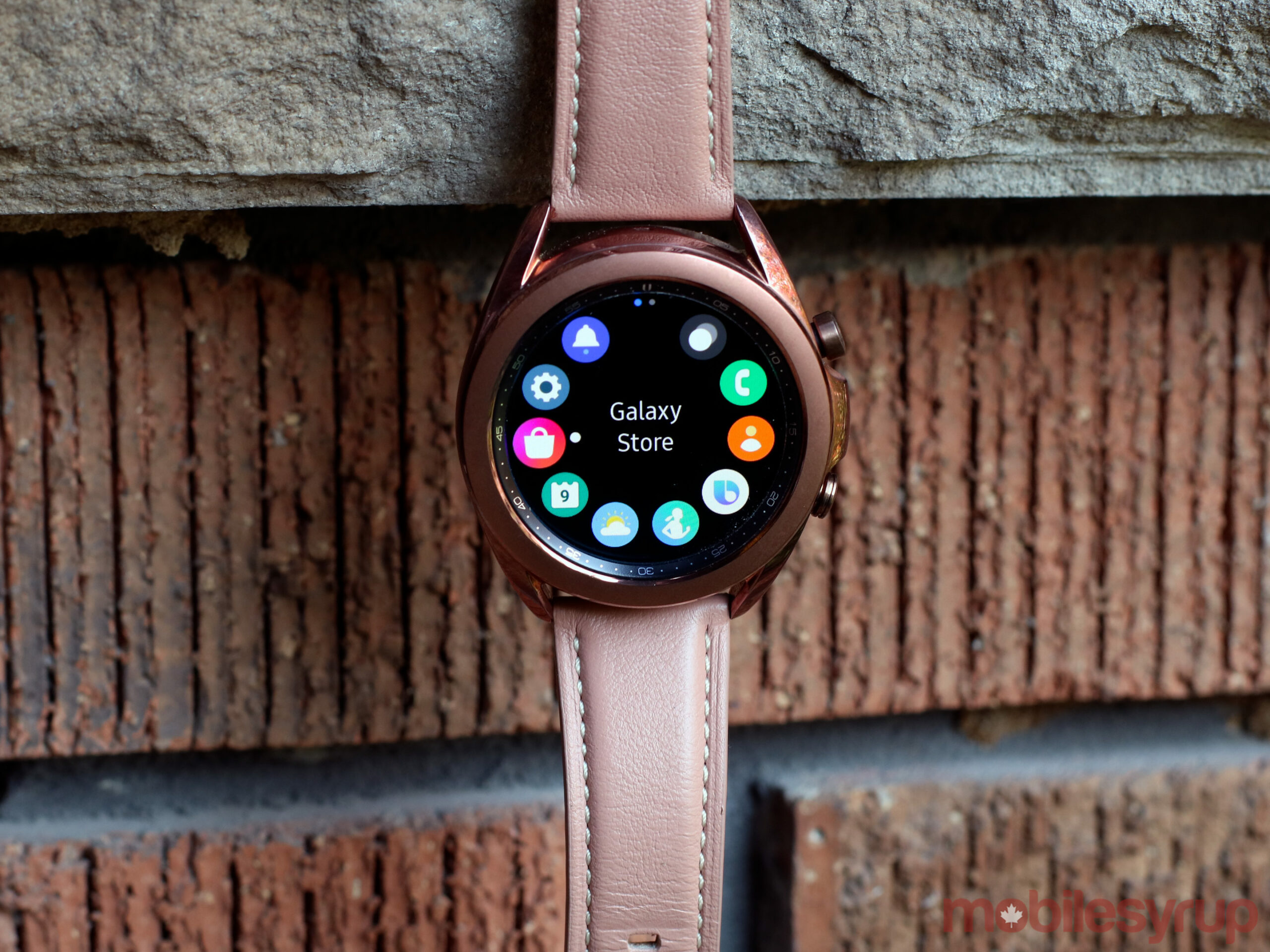 The first thing worth mentioning about the experience is that to get the watch to work, you’ll need to download the ‘Galaxy Wearable’ app and then install the Galaxy Watch plugin and, of course, download several updates. The process isn’t as bad when you’re using a Samsung Galaxy phone as you’ll likely have the wearable app already, but for the most part, I used the wearable with the Pixel 4 XL.

Performance on the Galaxy Watch 3 is snappy, but the smartwatch features 1GB of RAM and the same Exynos 9110 processor as the Galaxy Watch. If you’re not familiar with how RAM affects a wearable, 1GB is plenty. For example, previous Galaxy smartwatches actually featured less RAM and were still quite capable.

Samsung’s Tizen operating system (OS) hasn’t changed much from its previous iterations, and I have no complaints about that. This is another reason I’m pretty happy with the rotating bezel, as I feel that Tizen was built with the rotating navigation in mind. Everything is circular, and swapping between apps is quite easy and smooth. I found this was a problem with the Galaxy Watch Active 2. The OS just didn’t feel as fluid given the lack of the rotating bezel.

Tizen OS is based on Linux and contains proprietary components owned by Samsung. For context, the tech giant uses Tizen on its smartwatches, smart appliances and even some of its budget smartphones in Asia. 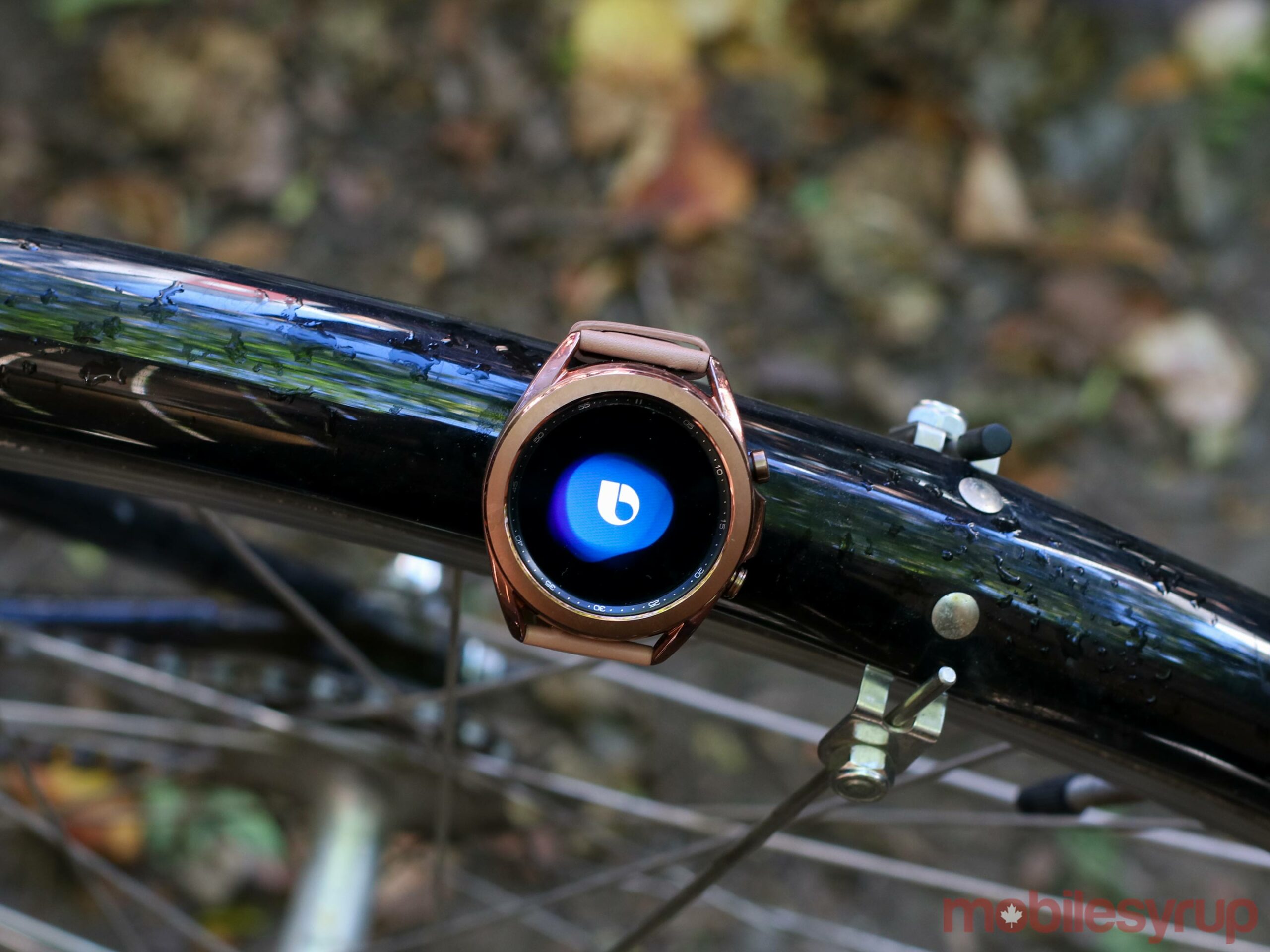 Though Tizen OS doesn’t feature as many apps as Google’s Wear or Apple’s watchOS, it’s still a competent wearable operating system. Further, the Galaxy Store is available on the watch and the user’s phone. It’s easy to navigate and offers various third-party apps, including Spotify, Uber and ‘Here WeGo’ for navigation.

Bixby works fine, but I wish Samsung would give up on the beleaguered voice-activated system and add Google Assistant to its wearables if only so I could use the Galaxy Watch 3 to control my smart home. You can activate Bixby by saying “Hi Bixby” when your screen is on and use it to ask for the time, set alarms and ask it to call different contacts. 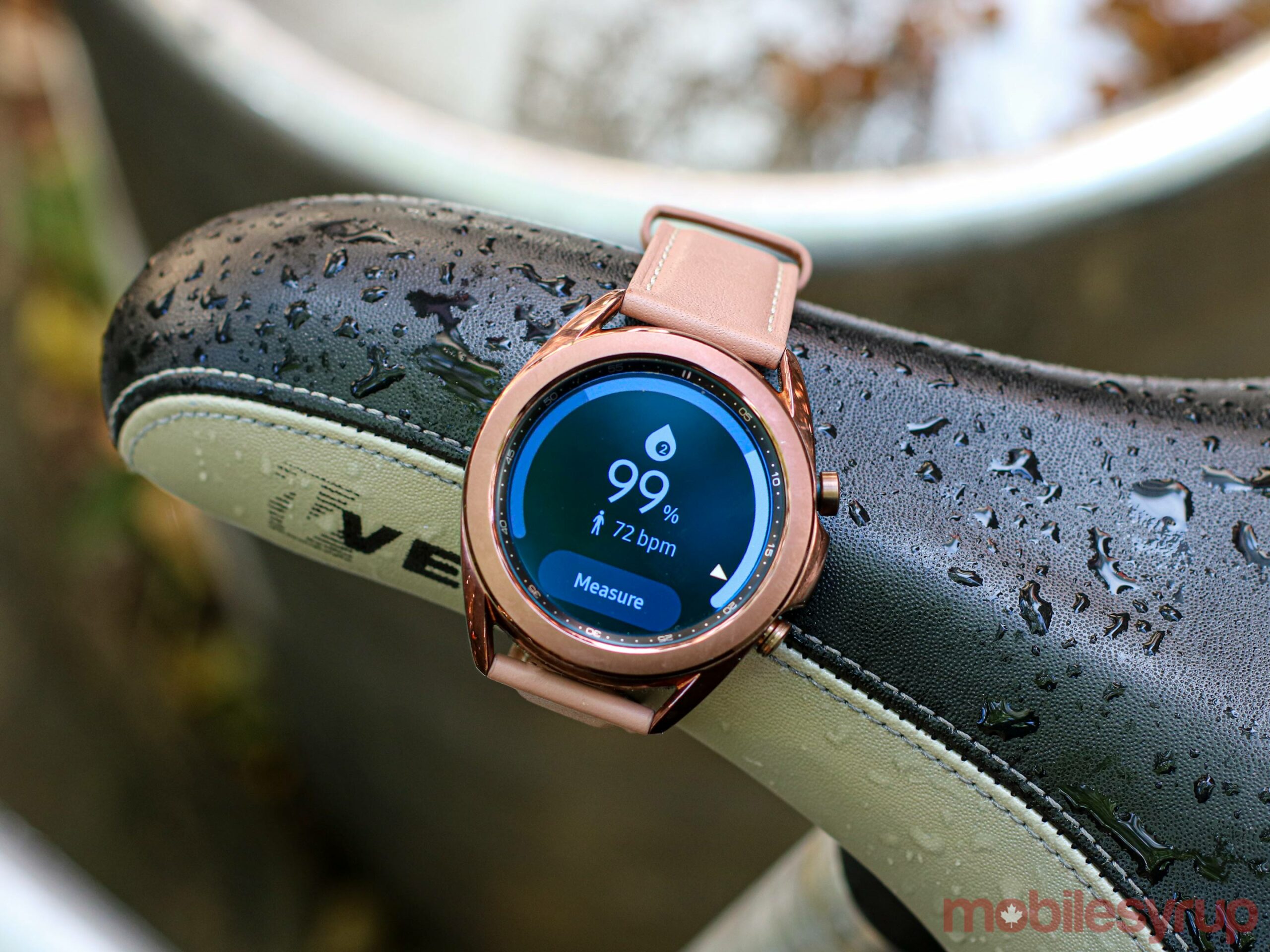 The process takes a bit longer than 15 seconds, and my results range anywhere from 97 to 99 percent. Below your results, there’s a ‘Help’ button that provides information about blood oxygen levels. For example, the watch says that “your blood oxygen level is an indicator of how effectively your blood is carrying oxygen throughout your body, which in turn can tell you whether you’re breathing effectively.“

The help button also provides information noting that the typical range of someone’s blood oxygen is from 95 to 100 percent. Other factors, like exercise and health conditions, are also contributors. Furthermore, like Apple, the South Korean tech giant is positioning this feature to measure wellness and not as an accurate diagnosis of health issues. 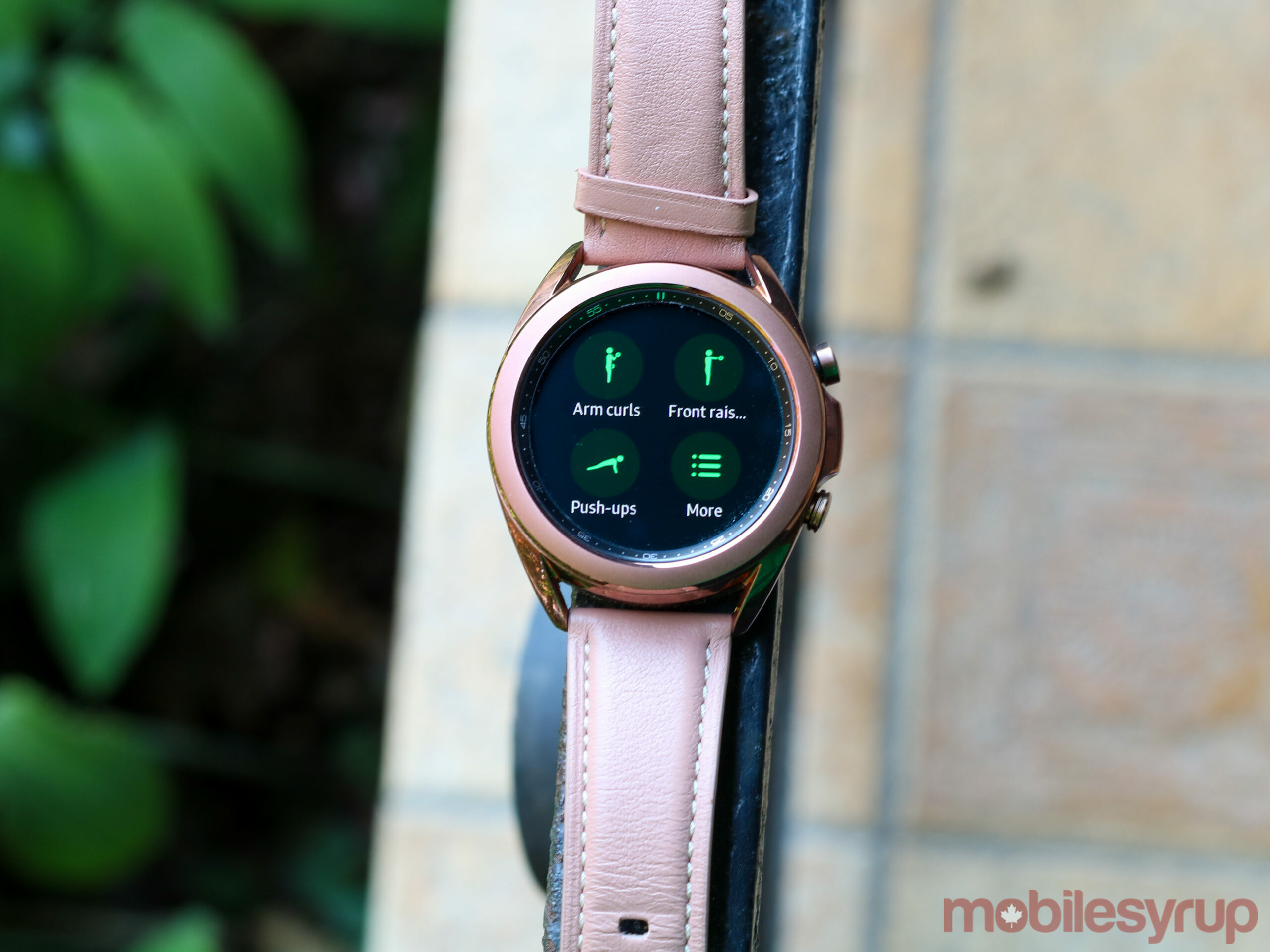 The Galaxy Watch 3 also monitors its user’s activity. Similar to other wearables, the Watch 3 tells you to get up once in a while if you’re sitting for too long and will also remind you to stretch. When you start moving again, the watch also congratulates you. For the most part, I found these notifications annoying, but they’re easy to ignore, and you can also turn them off.

Since I’ve been using the Galaxy Watch 3, I actually haven’t gone to the gym. With COVID-19 case numbers this high, I’ve decided to stay away from those types of facilities whenever possible. Previously, when I was at the gym using the elliptical, the Watch 3’s predecessors and the Active variants would confirm I was on an elliptical within a minute. With the Galaxy Watch 3, this seems to be a little different.

To get my cardio in, I’ve been bike riding and what I’ve noticed is that the watch doesn’t note what exercise you’re doing until after 10 minutes of continuous activity. It’s not that the watch isn’t measuring your activity, however. After the 10-minute mark, you’ll get a notification telling you that you’ve been biking for that long and how many calories you’ve burned. I can’t say if the Watch 3 does the same thing with the elliptical or waits only a minute like the previous watches.

The smartwatch can also automatically recognize when you’re running, rowing, walking and more. Additionally, you can tell the watch what other exercises you’re doing, such as weight training, push-ups, crunches, jumping jacks and more. When you’re doing this, the wearable will tell the user how long you’ve exercised and monitor your pulse. 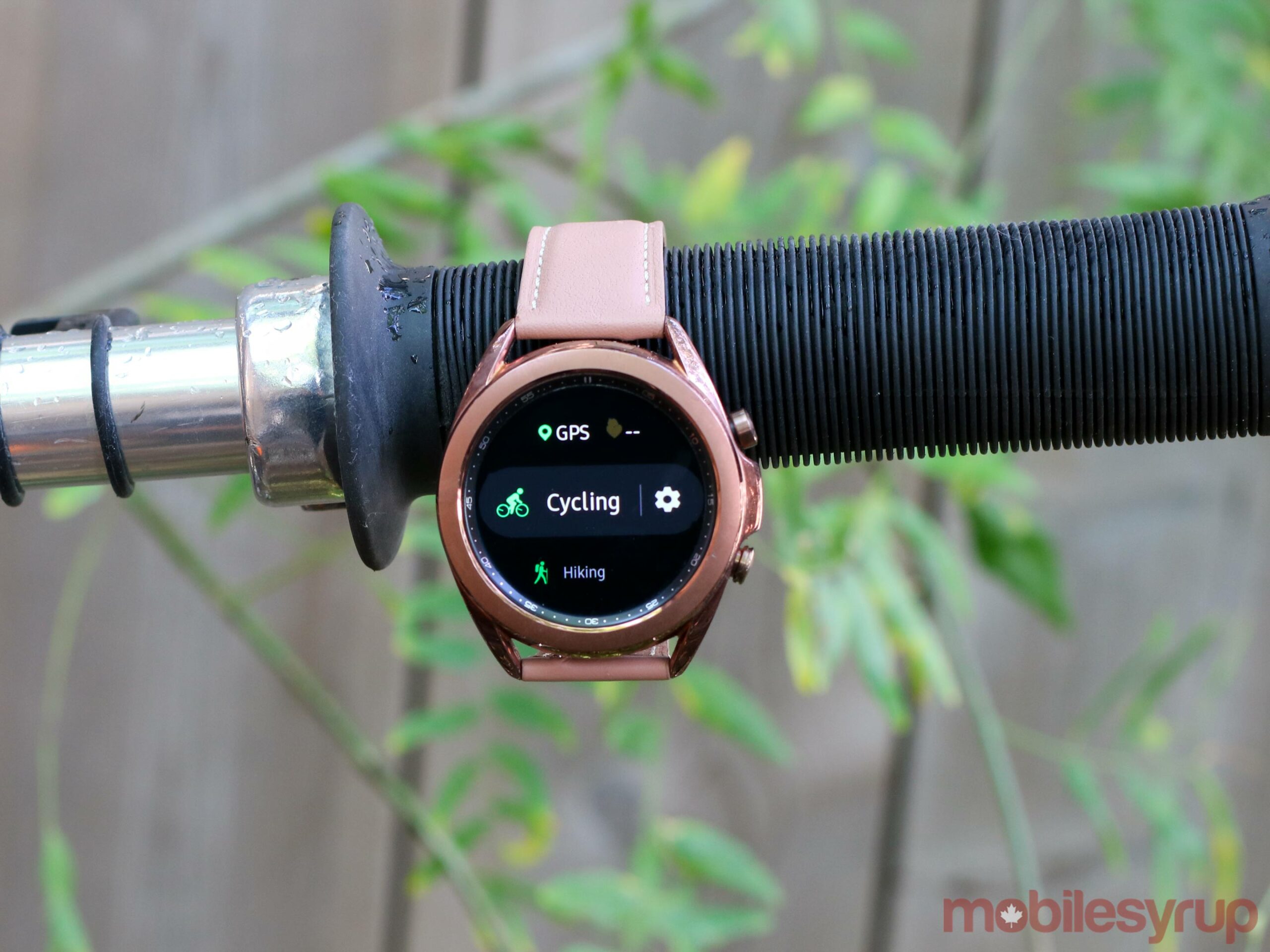 Similar to the Galaxy Watch Active series, the Watch 3 can now detect stress — the original Galaxy Watch only had the stress-monitoring feature in the U.S. When I use the feature, the watch says my stress level is average, although I actually think I’m pretty stressed nearly all the time, so I can’t really tell how accurate it is. The wearable takes a baseline of the user’s heart rate and uses it to compare with future stress tests to detect the wearer’s stress level.

If you’re worried about falling with the smartwatch on, the Galaxy Watch 3 features fall detection and will send an SOS message to an emergency contact with your location if you injure yourself. The watch also gives users the option to call the emergency contact remotely. 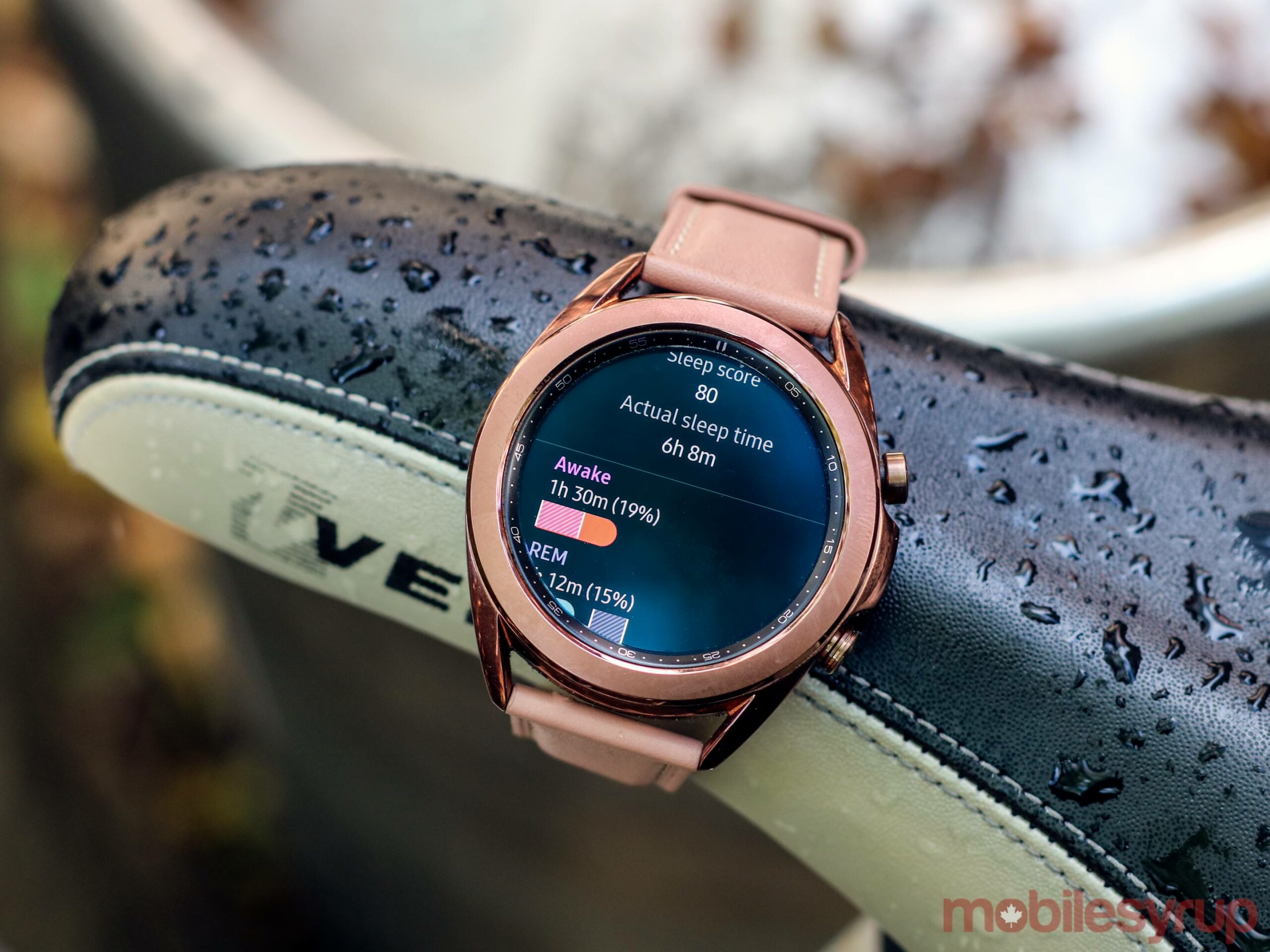 One of the features I use the most on the Galaxy Watch 3 is its sleep detection functionality. The sleep monitoring seems spot-on regarding tracking how long I’m sleeping, similar to previous Samsung wearables.

What’s new this time around is that the smartwatch tells users what type of sleep they’re getting throughout the night, including ‘light,’ ‘REM,’ and ‘deep.’ This is similar to how the latest Fitbits monitor sleep detection. It also tells users the typical range of each type of sleep they should get per night.

It’s difficult to say how accurately the Galaxy Watch 3 tracks sleep, but according to Samsung, the watch measures your heart rate and your movement to indicate which stage of sleep you’re in.

This functionality seems accurate, as I’m typically a lot more tired on the nights where I didn’t spend any time in the restful deep sleep and spent more time in light sleep (I wish I got better sleep).

“Call me, beep me if you want to reach me“ 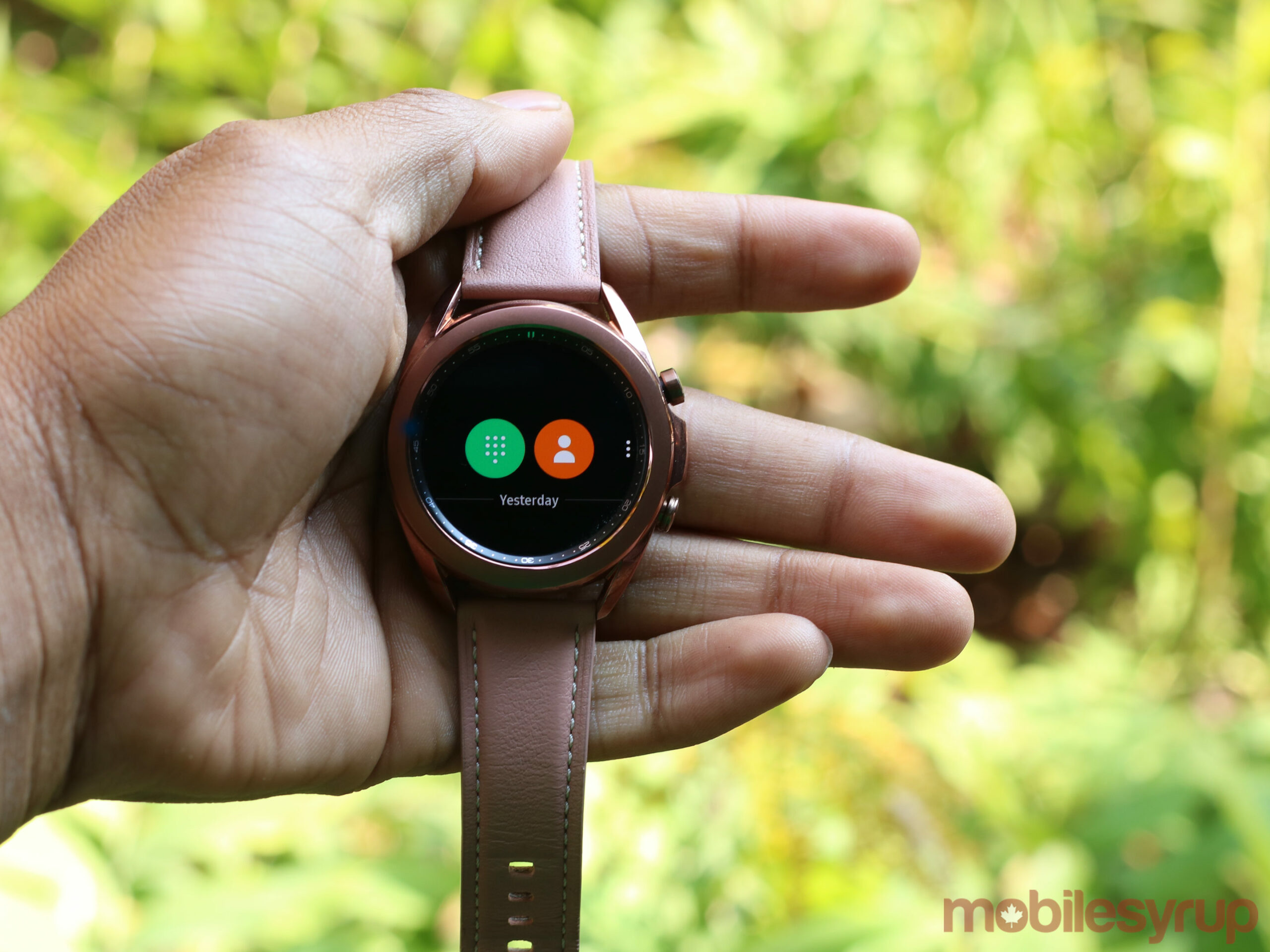 The Galaxy Watch 3 receives notifications like any other wearable. Still, the device lets users reply with a T9-like interface, which I love because it reminds me of old school pre-smartphone texting.

The Watch 3 can also make and take phone calls, similar to most of Samsung’s other wearables. While testing this feature, the person on the line said they could hear me clearly, and I had no issues hearing them.

I like this feature as it’s great when you’re driving if you don’t have Bluetooth in your car.

Panasonic’s new Lumix tool turns your camera into a webcam