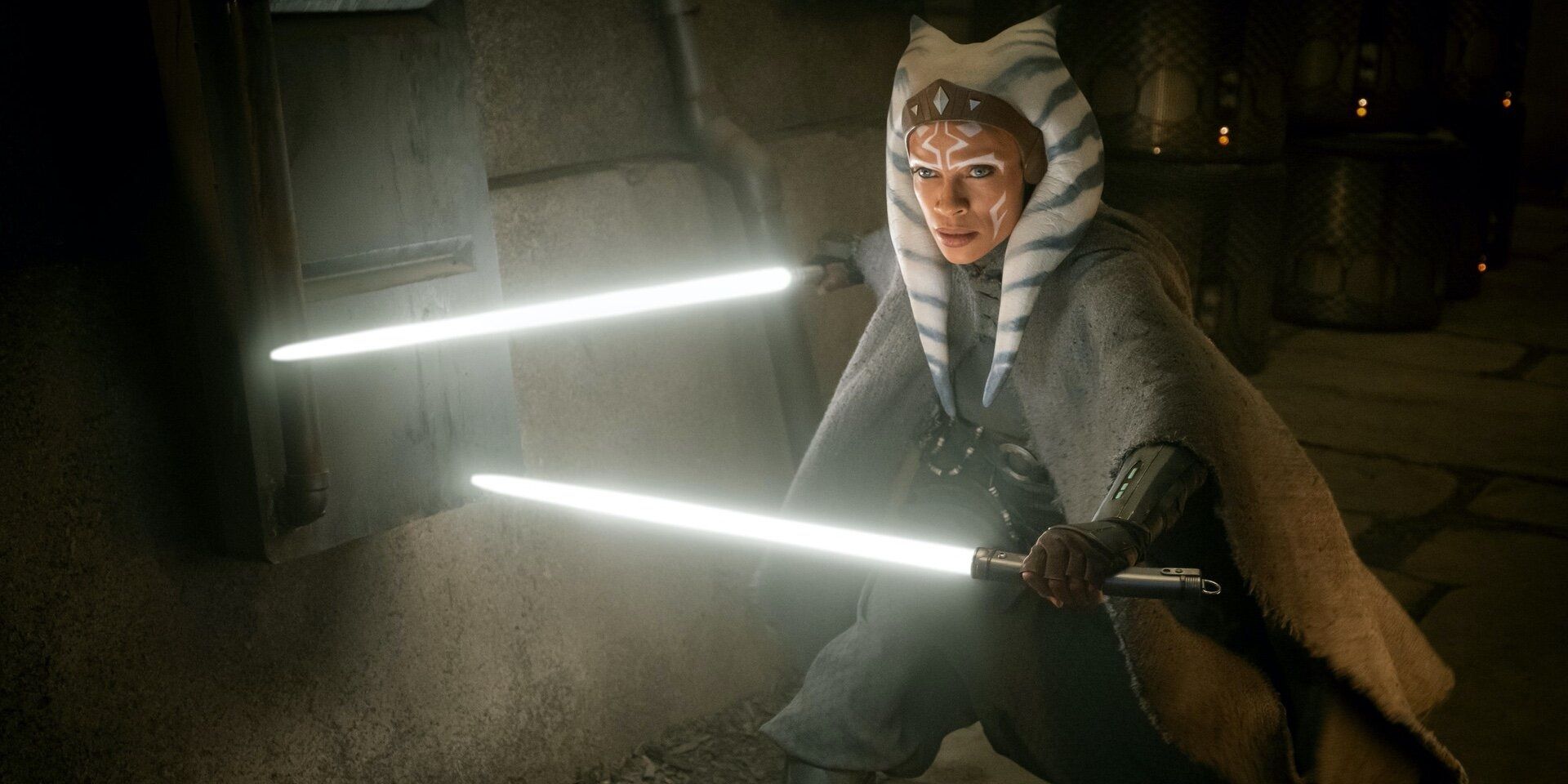 The Mandalorian’s Rosario Dawson gets in a lightsaber fight as her Star Wars character, Ahsoka Tano, on the set of the HBO miniseries, DMZ.

The Mandalorian’s Rosario Dawson gets in a lightsaber fight as her character, Ahsoka Tano, on the set of the HBO miniseries, DMZ. Disney+’s first live-action Star Wars series, The Mandalorian, has gone to great lengths to connect the films and animations. Season 2 introduced Star Wars: The Clone Wars and Star Wars: Rebels’ Bo-Katan Kryze (Katee Sackhoff) and Ahsoka Tano (Dawson), setting up the Ahsoka spin-off series to implement even more characters.

Dawson made her debut as Ahsoka, the Togruta and former Padawan of Anakin Skywalker during the Clone Wars, in “Chapter 13: The Jedi”—which was written and directed by Dave Filoni, who worked on The Clone Wars and created Rebels. The episode saw her wield a pair of white lightsabers against a cruel magistrate and offer audiences their first information about the backstory of Baby Yoda, including his real name, Grogu. Dawson’s Ahsoka was a highlight of the show’s second season, which justified a Disney+ show built around the character.

Dawson is currently filming the HBO miniseries, DMZ, following a civil war that breaks out in a futuristic America, and Manhattan becoming a demilitarized zone (hence the title). Dawson recently shared a video from the set in which she sports the montrals/head tails of her Star Wars character in a fun lightsaber fight. See the post in the space below:

Other Star Wars shows that have already begun production earlier this year include Obi-Wan Kenobi, Cassian Andor, and The Book of Boba Fett. The Ahsoka series has not yet been given a production start date or an official release date. It seems like that Dawson will begin work on Ahsoka before the end of the year. That said, it makes sense lightsaber fights would be on her mind as the anticipated series will presumably be full of sequences Dawson will have to train for.

Plot details for Ahsoka remain under wraps. In The Mandalorian, it was revealed that Ahsoka is hunting Admiral Thrawn, a primary antagonist of Rebels whose fate is tied to Jedi Ezra Bridger. At the end of Rebels, Ahsoka meets up with Sabine Wren to search for Ezra. Filoni has hinted that this scene may take place after Ahsoka’s appearance in The Mandalorian. Rumors have pointed to Lars Mikkelsen reprising his role of Thrawn for the live-action series and that Aladdin star, Mena Massoud, will play Ezra. Dawson, like Massoud, was a popular fan casting before being actually cast. She has proven to be the perfect actor to play the Force user and appears very enthusiastic and committed to Ashoka’s already-established persona.

More: Why Ahsoka Is Searching For Grand Admiral Thrawn In The Mandalorian