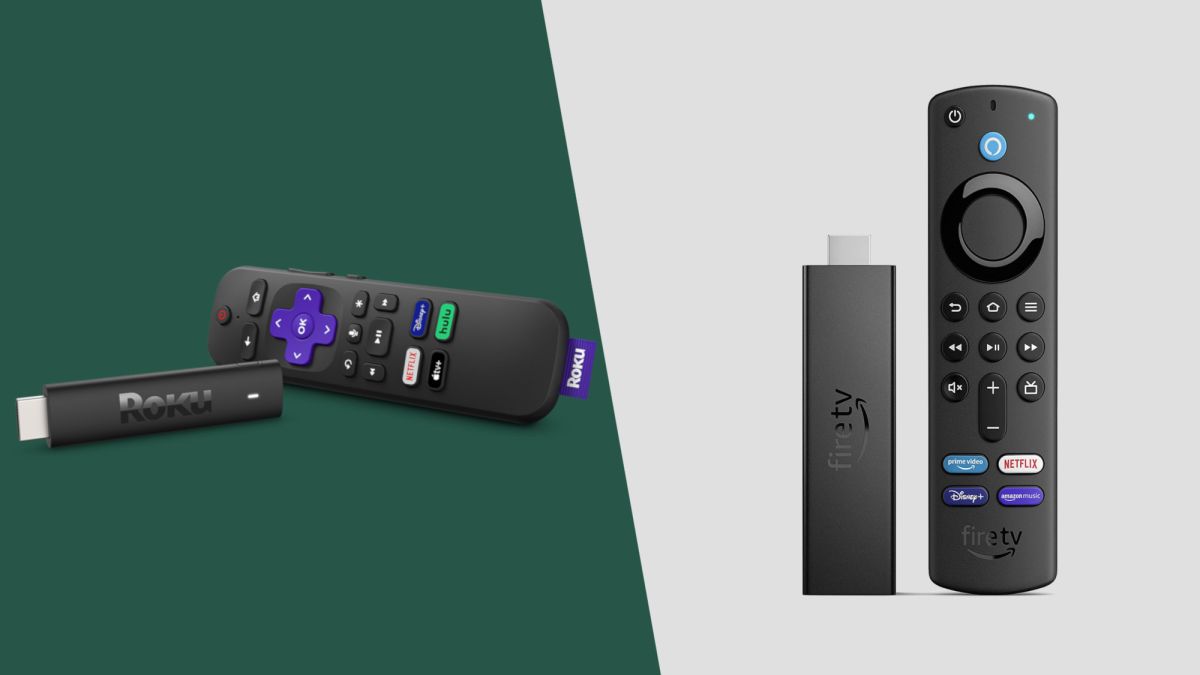 Not sure whether you want to buy a new Roku Streaming Stick 4K or a new Amazon Fire TV Stick 4K Max? We don’t blame you. It’s actually kind of confusing.

The reason for that is both Roku and Amazon are on annual release schedules for their celebrated streaming sticks… which can create a lot of confusion about what’s actually new and whether it’s worth your money.

The good news? Both the Roku Streaming Stick 4K and Amazon Fire TV Stick 4K Max seem to be well-suited to handle your streaming needs and while there are some key differences between them, they have more in common with one another than you might think.

To help break down the differences – and similarities – we’ve put together a guide between the two streaming platforms that should hopefully help you make up your mind which of the two are worth picking up.

The larger difference between the two streaming sticks is the platforms you’ll be using when you turn them on. In the case of Roku, that’s Roku OS while Amazon has Fire TV.

Overall we find Roku OS to be a bit simpler and functional, while Fire TV is a bit flashier and content-first. If you like to be greeted by new show and movie recommendations when you turn on your streaming device, Amazon has that down to a literal science – but, if you’re all about seeing all the streaming services at your fingertips, Roku has you covered.

Good help can be hard to find on a streaming stick. The Amazon Fire TV Stick 4K Max, thankfully, comes with Alexa on-board with a voice remote that you can use to talk directly to the smart assistant. Roku, on the other hand, comes with a built-in Roku Assistant that is, well, not nearly as powerful. While Alexa can answer some pretty tough questions about pretty much everything, Roku’s knowledge is mostly limited to what actors were in which films and which director was at the helm of which movie.

Long story short, if you want the streaming stick with the functionality to unlock doors and check on security cameras, Amazon has it and Roku does not.

Amazon and Roku chose to prioritize different aspects of their streaming sticks in 2021. The Roku Streaming Stick 4K offers a wide ranging Wi-Fi antenna that should be able to stretch from one end of your home to the other, while Amazon focused on speed with the installation of a Wi-Fi 6 (802.11ax) standard on its streaming stick.

What that means, essentially, is that the Fire TV Stick 4K Max should be able to load content faster and rarely have to buffer, the Roku Streaming Stick 4K should provide a larger area of coverage where it will still work. In this case, both have their advantages.

This probably won’t be relevant to everyone, but we’d be remiss if we didn’t at least mention Amazon’s new game-streaming service, Luna, and Roku’s growing library of free shows and movies. Luna is a cloud gaming service that streams popular games for a set fee per month – making it perfect for gamers who want the latest games without any downloads – while Roku’s selection of free shows and movies should appease cord-cutters who want lots of content without having to pay for it.

Similarity #1: They have the same apps (mostly)

Of course, these sticks aren’t exactly polar opposites, either. One area that we see some clear similarities is in their app libraries. Both Amazon Fire TV Stick 4K Max and Roku Streaming Stick 4K can access a number of the same services – Netflix, Amazon Prime Video, Disney Plus, Hulu and more are all present and accounted for – which means, regardless of which player you end up choosing, you don’t have to worry too much about losing out on any of the main streaming services.

Similarity #2: They come with a remote

Another nice advantage of both players is that they come with a remote that works, more or less, exactly the same. Both remotes can be used to control the TV’s power and volume controls thanks to HDMI-CEC support and you’ll find shortcut buttons for the most popular streaming services on both remotes.

While you might see some minor differences in playback, you won’t find any differences in the types of content these players support. This generation, both the Roku Streaming Stick 4K and Amazon Fire TV Stick 4K Max support 4K resolution and every major form of HDR including Dolby Vision and HDR10+. That means, whether you’ve got an LG, Samsung, Sony TV or something else entirely different, you should be able to watch all your favorite shows in the highest possible resolution and formats with whichever device you want.

Finally, and this is a pretty obvious one, their form factors are nearly identical. Both are the size of about a USB stick, and can squeeze behind your TV to stay hidden from sight. The streaming stick form factor is great when you want that clean look to your entertainment center or wall-mounted TV, and both the Amazon and Roku players will provide that for you.

Verdict: Both are good for a different reason

While most feuds in the technology world have one clear winner and one clear loser, that’s really not the case between these two streaming devices – both have great use cases where they’re the superior streamer.

For example, if you’re looking for an intuitive streaming stick that you can give to a family member who isn’t always the most tech-savvy, the Roku is great. It has an easy-to-understand user interface and access to all the main apps. With its wide Wi-Fi range, it shouldn’t have any issues and its performance means everything should run smoothly for years to come.

That said, if you pick up the Amazon Fire TV 4K Max, you’ll find yourself in possession of a 4K streamer with a content-first approach that will recommend new shows and movies each and every time you turn it on. It’s perfect for folks who already have Wi-Fi 6 in their home and who might want to check out Amazon Luna now or sometime in the future.