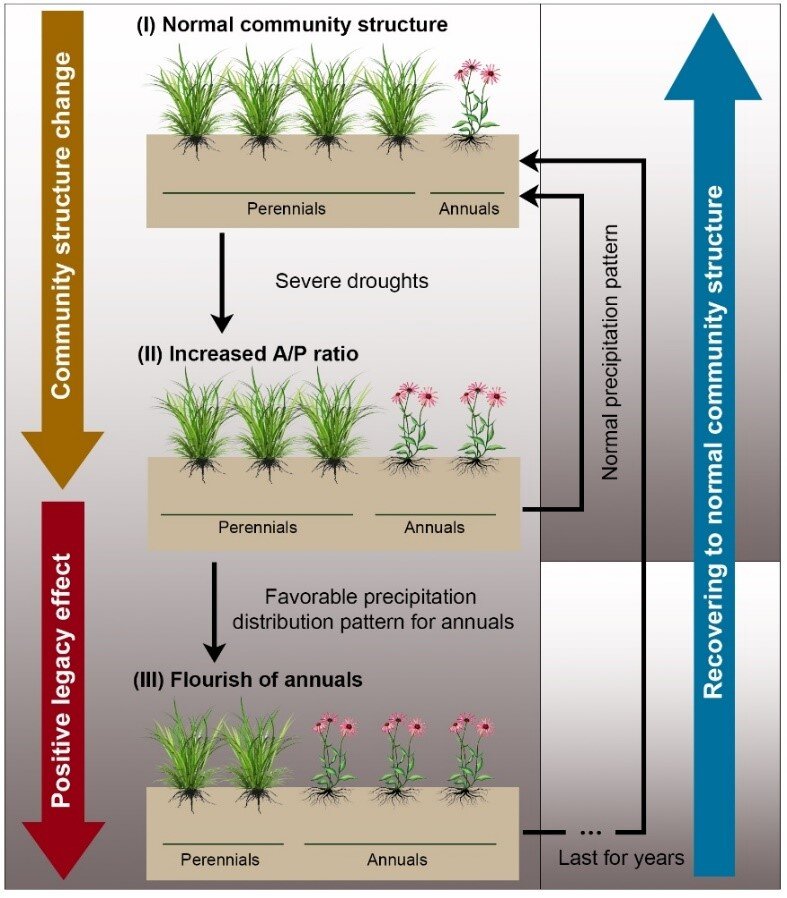 However, combining a four-year precipitation manipulation experiment with a 40-year observational study in the Inner Mongolia grassland, researchers from the Institute of Botany of the Chinese Academy of Sciences (CAS) found that previous-year extreme droughts could create strong positive legacies for current-year community productivity when drought treatments were stopped.

This result was quite different from previous findings that drought years usually had negative legacy effects on community productivity. The current study is published in Science Advances.

In this study, the researchers led by Prof. Pan Qingmin and Prof. Han Xingguo discovered that the mechanism driving positive drought legacies was the coupled effect of a drought-induced increase in annuals in the previous year and an “early less, middle more” precipitation pattern that facilitated the flourishing of annuals in the current year.

If such a pattern continues for several years, so will the positive legacy effect.

In view of this, the researchers provided experimental and observational evidence that extreme drought-induced change in community structure in the previous year, as indicated by an increase in the annuals/perennials ratio, coupled with a favorable precipitation pattern for the flourishing of annuals in subsequent years, could have strong positive legacy effects on community productivity.

In this study, positive legacy effects on grassland productivity were found in more than one-third of the past 40 years. Since global climate models predict more frequent drought extremes in grasslands worldwide, these findings may have implications for understanding the impact of extreme drought on ecosystem functioning and services in grasslands.

Considering that annuals are becoming more abundant in a large number of grazing grasslands worldwide, drought-induced positive legacies in these systems are expected to be more evident. Thus, models forecasting ecosystem feedbacks in response to climate change should consider positive drought legacies in grasslands.