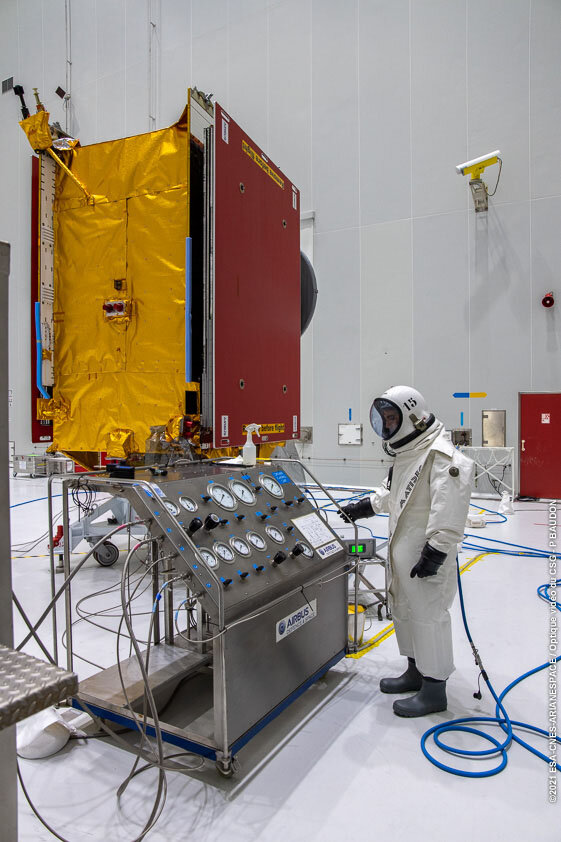 A sophisticated telecommunications satellite capable of being completely repurposed in orbit has been fuelled ready for its launch on 30 July.

Developed under an ESA Partnership Project called Quantum, the satellite is pioneering a new generation of fully reconfigurable satellites that can respond while in orbit to changing demands on Earth during their 15-year lifetimes.

It is the first reprogrammable commercial telecommunications satellite to operate in a high-frequency radio range called the Ku band that is used for data transmission and secure communications, notably with ships at sea.

Its beams can be redirected to move in almost real time to provide information to passengers on board moving planes or ships. The beams can also be adjusted at the push of a button, so that more data is delivered when demand surges.

The satellite has now been fuelled with propellant and oxidiser.

These will be ignited after the satellite has left its Ariane 5 launcher in the low-Earth orbit phase of the launch and will enable it to circularize its orbit to reach its final geostationary position some 36 000 kilometers above the Earth.

The remaining fuel will be used to maintain the satellite in its correct position during its expected 15-year lifetime.

“This collaboration is a great example of teamwork as the teams faced many uncertainties and challenges due to the recent global health pandemic,” says Frédèric Piro, Eutelsat Quantum Program Manager.

“Eutelsat Quantum is an important program for Airbus and European industry and a typical example of the success of an ESA Partnership Project,” says Christophe d’Allest, the Eutelsat Quantum Program Manager at Airbus.

The Ariane 5 rocket is operated by Arianespace at Europe’s Spaceport. It is able to carry payloads weighing more than 10 tons to geostationary transfer orbit and over 20 tons into low Earth orbit. Its performance perfectly complements that of Europe’s Vega light-lift launch vehicle, and Soyuz.

Europe’s next-generation Ariane 6 rocket will ultimately replace Ariane 5. Available in two versions, it will be capable of a wide range of missions to any orbit.

Titans: 10 Things To Notice In The New Trailer