Remote work may be keeping some cities’ air cleaner 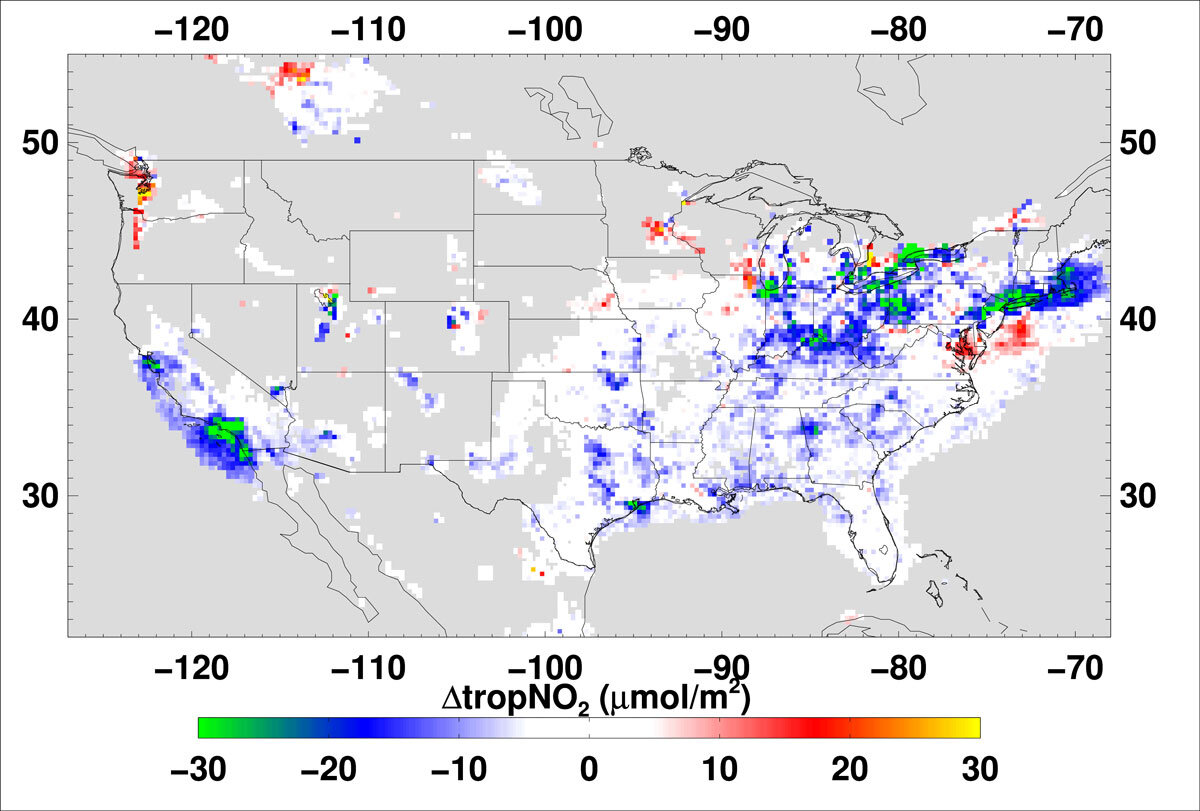 In the spring of 2020, COVID-19-related restrictions in the United States led to reductions in nitrogen oxide (NOx) emissions because of the sudden drop in road traffic. But even after restrictions were lifted and the flow of traffic resumed, NOx emissions from transportation remained around 20% lower than pre-COVID-19 averages in some cities through the end of 2020.

The lingering decline in air pollution could be explained by a rise in remote working, according to a new study in Journal of Geophysical Research: Atmospheres.

In the atmosphere, NOx converts to nitrogen dioxide (NO2), a pollutant that can cause respiratory health problems. Using NO2 data collected by satellites, researchers tracked the fall and rise of traffic-related air pollution in five U.S. urban areas from February to November 2020: Atlanta, New York City, San Francisco, Los Angeles, and the San Joaquin Valley in California. In the latter four regions, air pollution did not return to prelockdown levels even as people resumed normal activities in the summer and remained mobile through fall. Instead, NO2 levels rose to around 80% of what they were in February, then plateaued. Atlanta had a delayed rise in NO2 but returned to prelockdown NO2 levels in August 2020.

“Even though lockdowns had been lifted, 25% of the workforce was still working remotely. So if employers continue to offer remote work policies, this could become the new normal in air quality,” said Shobha Kondragunta, a physical scientist at NOAA’s Center for Satellite Applications and Research who was lead author of the study.

When they applied their model across major urban areas in the continental United States, the researchers found decreases in NO2 concentrations in most metropolitan areas from February to November 2020 compared to the same time period in 2019.

The satellites used in the study changed their algorithms in December, so the team could not continue the analysis for December and into 2021. But, Kondragunta said, “even in 2021, we are still below prepandemic NOx emissions levels.”

Kondragunta et al. also found a correlation between the national unemployment rate and NO2 pollution in the second fiscal quarter of 2020 (April through June), which they suggest could be attributed to a drop in both passenger and freight traffic.

“Remote work can potentially explain the drops in passenger traffic, but freight traffic is driven more by the economy. The data show a larger drop for passenger traffic than freight—people are still ordering goods if they work at home, right?” said Brian McDonald, an atmospheric scientist at NOAA’s Chemical Sciences Laboratory who coauthored the study.

Changes in air pollution from COVID-19 lockdowns varied regionally and are not yet fully understood. The model showed some cities, like Seattle and the Chicago suburbs, experienced smaller-magnitude increases in NO2 that exceeded prelockdown levels during the study period, along with some rural areas. This increase could be due to normal background variability in NO2, said McDonald. Understanding regional patterns in air pollution and looking at pollutants other than NO2 “is ultimately the goal. We want to know how air quality changed in response to lockdowns, and this study is one piece of that.”

This story is republished courtesy of Eos, hosted by the American Geophysical Union. Read the original story here.

Masterful Cyberpunk Noir Reckons With the Helplessness of Connectivity