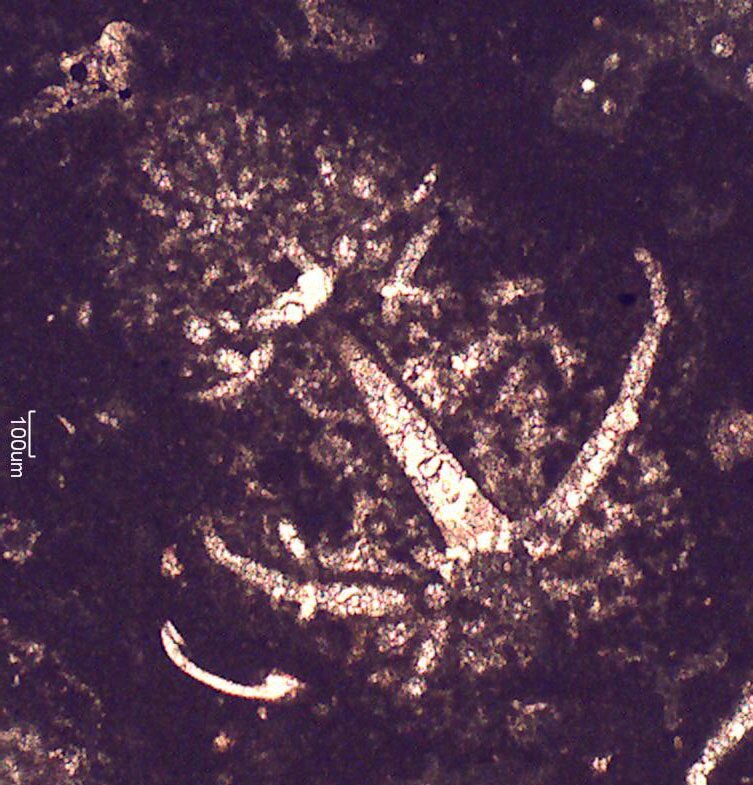 Palaeonitella trifurcate is the name of a new fossil species of a freshwater plant from the Lower Cretaceous found and reconstructed by a team of geologists of the University of Barcelona. The reconstruction of the plant, dating from between 125 and 120 million years ago, has been conducted using the plant organs found separately in a stratum of limestone from the Natural Park of Garraf, in Olivella (Barcelona).

This is one of the few fossil charophytes, pluricellular algae that are considered to be the ancestors of vascular plants, which have been fully reconstructed. This has been made possible putting together the different organs—the main stem, branches and the fructifications—as puzzle pieces. The paper, published in the journal Review of Palaeobotany and Palynology, is led by Carles Martín-Closas, tenured university lecturer at the Faculty of Earth Sciences and the Biodiversity Research Institute (IRBio) of the UB. Experts from the Geomodels Research Institute of the UB and the Tubkal Ingeniería company have also participated in the study.

Plants from the past can be kept in the fossil records with separate organs. That is, there are leaves on the one hand, and fruits, pollen, wood, roots, etc. on the other. This made the scientific community to create different species taxon for each of these organs in a parallel taxonomy and nomenclature—parataxonomy—in order to relate the different elements and reconstruct the full plant. Only in a few cases does this process end in the complete reconstruction of the specimen, so the most common thing to do is to work with parataxons.

The plant has been attributed to the new species Palaeonitella trifurcate and it belongs to a group of charophytes that has been rarely kept in a fossil state. It is characterized by the presence of side branches with opposite trifurcations and another terminal trifurcation where the oospores were inserted.

“The genus Palaeonitella is a parataxon that has been used to classify the barked thallus —without cortex— of fossil charophytes. Other species from the same morphogenus of the Lower Cretaceous were found—specifically in Cuenca—and from the Devonian period in Scotland. Researchers have also described it in fossil charophytes from the Permian period in Saudi Arabia. These references belong to different morphospecies, without any biological affinity between them,” notes Carles Martín-Closas, lecturer from the Department of Earth and Ocean Dynamics of the UB.

“It is possible,” he adds, “for Palaeonitella trifurcata to be an old species from the clade now represented by the Nitella genus. This would be indicated by characters such as the non-calcified oospore, the barked thallus and the repeated trifurcations in the vegetative structure.”

Why is it hard to find Palaeonitella fossils from the Lower Cretaceous?

Conservation of charophytes in the fossil records depends on their calficiation during their life cycle. Therefore, if these do not undergo calcification—like the case of the current Nitella genus and its fossil ancestors such as Palaeonitella trifurcate—fossilization only occurs in exceptional cases.

Regarding Palaeonitella trifurcate, the key of its conservation should be found in the cyanobacterial bush that colonized this charopyte. The cyanobacteria created a calcite crust in the plant—like a mummy’s sarcophagi—that protected the plant from the post mortem degradation.

“However, the most exceptional thing in the analyzed fossil is not the fact that it was conserved until today, but that it has been possible to relate the organs to each other to reconstruct the complete plant,” highlights the researcher.

The study of the sedimentology and the microfossils associated with Palaeonitella trifurcate has enabled researchers to reconstruct a paleoenvironment with littoral freshwater lakes, connected with basins protected from marine salinity, similar to coastal lagoons. In this habitat of the Lower Cretaceous, there were organisms typical of shallow waters, such as benthic foraminifera and chlorophytes from the group of dasicladals, an order of the chlorophyll algae.

‘Sea Of Stars’ gets announcement trailer at Nintendo Indie World

Via’s personal ride-hailing will shut down next week