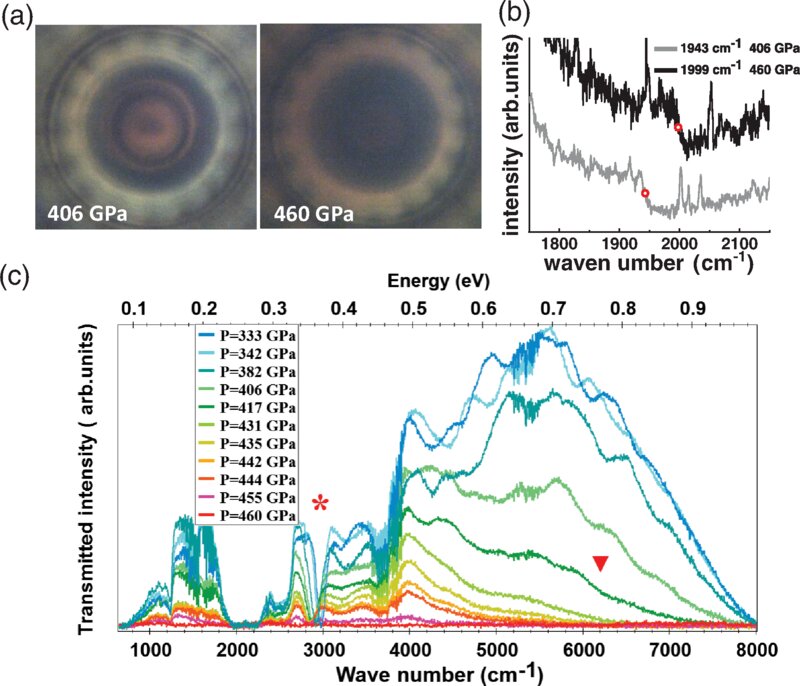 A trio of researchers at the French Alternative Energies and Atomic Energy Commission has shown promising evidence of deuterium forming into a metallic state at high pressure. In their paper published in the journal Physical Review Letters, Paul Loubeyre, Florent Occelli, and Paul Dumas describe the process they used to pressurize a deuterium sample and test it for a transition state.

Theory suggests that all elements should transition to a metallic state if subjected to strong enough pressure. This is because at some point, their electrons will become delocalized. But modeling, much less demonstrating, such transition points has proven to be difficult. Early research looking for the transition state of hydrogen led to theories that it would reach a metallic state when hydrogen molecules disassociated completely. That led to many efforts to see if such theories were true—sadly, none were successful. Then in 2000, a team at Cornell University calculated that hydrogen should transition at 410 GPa. In 2020, the researchers of the current study used a diamond anvil cell to compress a sample of hydrogen to 425 GPa and used synchrotron infrared absorption and Raman spectroscopy to measure the band gap of the material. They found a sudden drop from 0.6eV to 0.1eV at 80K, comprising promising evidence of hydrogen forming into a metallic state as theorized.

A short time later, physicist Alexander Goncharov suggested that transitions should happen more easily under conditions where quantum motion could allow for some atoms to tunnel from one place to another. Noting that deuterium nuclei are heavier than hydrogen, the researchers reasoned that they should be less delocalized than protons and thus should require more pressure to transition. To find out if that was the case, the team reran their 2020 effort, only this time, they used deuterium instead of hydrogen. They found the band gap decreased in ways similar to the hydrogen experiment, but it did so at 460 GPa, possibly confirming the theory. The researchers noted that they also saw nothing that would indicate molecular disassociation had occurred in either experiment.

Scientists reveal the limits of machine learning for hydrogen models

Melodies of Steel 2 will wage furrypunk warfare in 2023 – Destructoid

5G on airplanes could mean the end of Airplane…