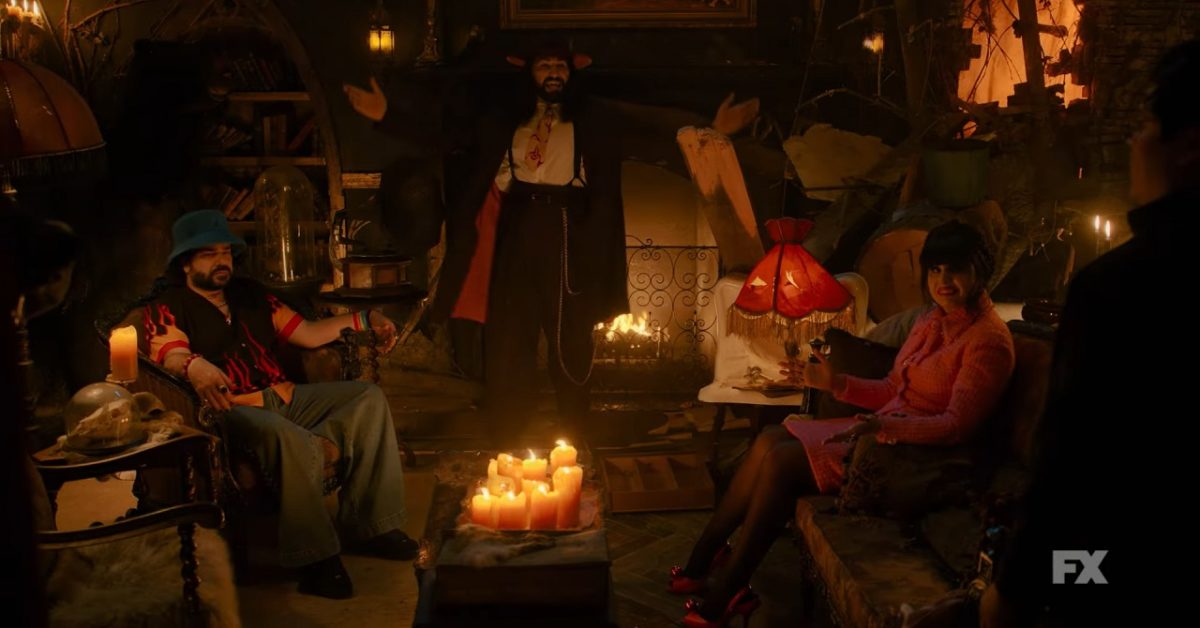 While we’re going to avoid spoilers for this week’s episode until we post our review tomorrow, we do have a trailer for what’s to come with FX’s What We Do in the Shadows S04E05 “Private School.” And as you can tell from the title, Baby Colin (Mark Proksch) is quickly entering into “wild child” status. So what better time than now to ship him off to get a little structure to his life? But to make that happen, Nadja (Natasia Demetriou), Laszlo (Matt Berry), Guillermo (Harvey Guillén), and Nandor (Kayvan Novak) are going to have to ace some private school admission interviews. Uh-ih…

Now here’s a look at the trailer and overview for next week’s What We Do in the Shadows S04E05 “Private School” (written by Ayo Edebiri & Shana Gohd and directed by Kyle Newacheck):

What We Do in the Shadows Season 4 Episode 5 “Private School”: The vampires endure the private school admissions interview process. Written by Ayo Edebiri & Shana Gohd and directed by Kyle Newacheck.

And here’s the “First Look” featurette focused on Season 4 that was released over SDCC weekend:

And in the following clips, we get a look at what life is like for an energy vampire as well as for a human living among vampires. Then, we have a look back at the 7 top in-house quarrels (with Guillermo & Nandor’s Season 3 finale fight at the top of our list):

As the series heads into its fifth episode next week, here’s a look back at the official trailer for FX’s What We Do in the Shadows:

In the shocking season three finale of “What We Do in the Shadows,” Nandor, Guillermo and Nadja left Staten Island to go their separate ways while Laszlo stayed home to care for the creature that clawed its way out of the chest cavity of the deceased Colin Robinson — aka Baby Colin. This season, the vampires return to Staten Island to find their mansion on the verge of total structural collapse — and with no money to repair it. While Nandor’s eternal search for love finally yields results, Nadja finally realizes her dream of opening the hottest vampire nightclub in the Tri-State Area. Laszlo struggles with the question of nature versus nurture as he tries raising Baby Colin to be anything other than an energy vampire. And even Guillermo finds himself on a powerful emotional track that touches on his love for his family, and for others.

With such terrifying locations as the secret supernatural Night Market, the Jersey Pine Barrens and a wedding altar, and with more strange beasts, surprising guest stars and tap dancing than ever, season four of What We Do in the Shadows continues to make the case for blood and comedy. And this time with just a touch of home renovation.

Created by Jemaine Clement and produced by FX Productions, What We Do in the Shadows stars Kayvan Novak as Nandor, Natasia Demetriou as Nadja, Matt Berry as Laszlo, Mark Proksch as Colin Robinson, and Harvey Guillén as Guillermo. Joining them this season in recurring roles is Anoop Desai (American Idol) as an acquaintance of Nandor’s from his ancestral homeland. In addition, SEAL Team star Parisa Fakhri (SEAL Team) has joined the cast as Marwa, one of Nandor’s 37 wives from his days as an ancient warrior in the kingdom of Al Quolanudar. Clement, Waititi, and Paul Simms serve as executive producers for What We Do in the Shadows, alongside Scott Rudin, Garrett Basch, Eli Bush, and Stefani Robinson.