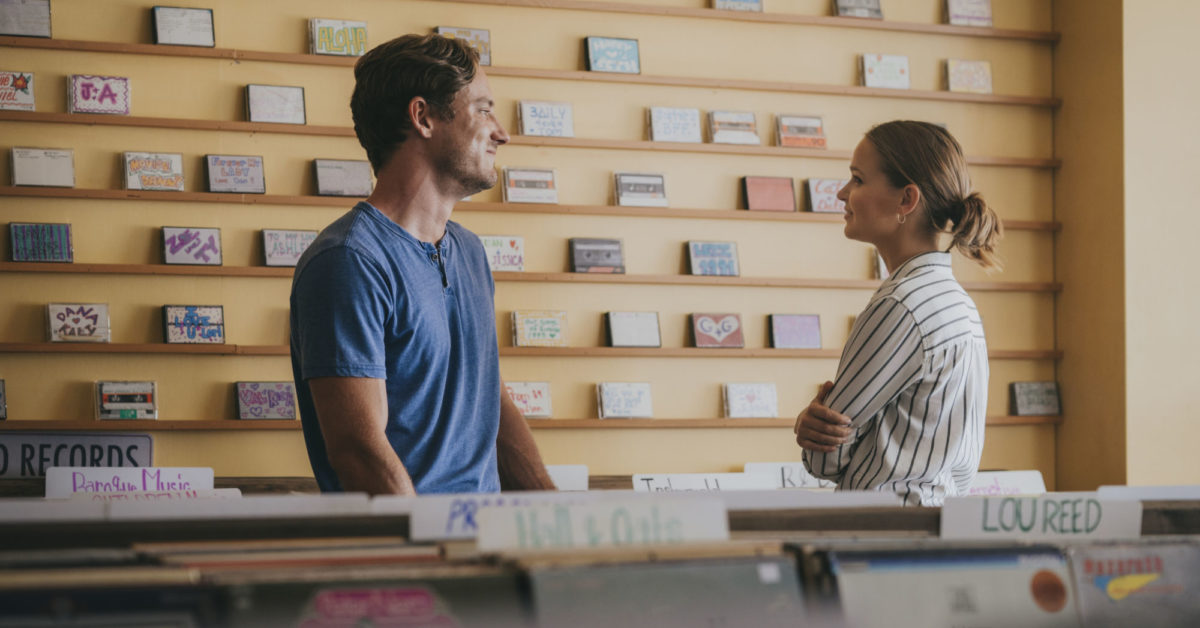 Lewis Pullman emerged as one of the most versatile up-and-coming talents with memorable roles in 20th Studios’ Bad Times at the El Royale (2018), Hulu’s Catch-22, Amazon Prime Video’s Outer Range, and Paramount’s Top Gun: Maverick. His latest is an indie romantic sci-fi drama in The Avenue’s Press Play that follows Laura (Clara Rugaard), who follows in love with Harrison (Pullman). Their live together is short-lived following a tragic accident, but she has an opportunity to save him upon discovering a mixtape that allows her to travel through time. Pullman spoke with Bleeding Cool about his co-star, the challenges of filming the time-travel story and working with director Greg Björkman.

Bleeding Cool: What about ‘Press Play’ interested you?
Lewis Pullman: [‘Press Play’ is] a kind of a classic romantic drama flipped on its head. It was a gamble; I think trying to marry these two genres together and make it feel like neither one was taking up too much space and co-existed in the same proverbial world. It was intriguing and a fun challenge. Grappling with a lot of these things that Laura and Harrison deal with throughout this movie was so far out of the realm of what my existence looks like. It required us to recruit a lot of childlike imagination to put ourselves through these situations and imagine how we would react or what we would do.

BC: Clara told us about how shooting the sequences in ‘Press Play’ became disorienting with the time travel aspects. Did it feel the same for you?
Pullman: Yeah, absolutely. I don’t know if you’ve seen ‘I Am Mother’, but I was blown away when I watched it after reading the script. Clara was so capable of playing that a character who has a certain idea of what her reality looks like and then is just blindsided by this massive piece of information that just shatters their entire idea of existence and then playing through those the concession of thoughts and the disbelief, denial, doubt, acceptance and then the practicality. I was like, ‘Wow! She’s going to be able to really elevate this whole film.’

[Clara] was really helpful to be able to draw from because she’s capable of almost like going back to the sandbox and being like a kid and like, ‘What would this really feel like? What would this really what would a person do if they were trying to accept this as a new truth that it is possible for two people to do time travel?’ Then, it was quite difficult, especially in those moments, because you are following Laura’s story for so many periods, and you don’t know what Harrison is doing or how he’s processing this information.

You come in at these little interjections and see Harrison after he’s just had a huge piece of information from Laura where she’s directing him, saying, ‘You should try this’ or ‘You should try that.’ To fill in those blanks was important for me in order to kind of carve-out Harrison’s arc and where he is when you find him and all of that and all these different scenarios. You only have like two and a half minutes, however long the song is, to express those things and give the audience a sense of where Harrison has been, where he is right now, and where you think he might go next. Doing that not in chronological order was a bit required a lot of mental gymnastics.

Bleeding Cool: Working with the director Greg Björkman, how do you feel he fared in his theatrical debut as a director?
Pullman: I think [Greg] had a great personal approach to the whole thing. He wanted it to feel very familiar, and we could express ideas. He had an experience with someone that mirrored a lot of the things you see Laura and Harrison going through, not the time travel element, obviously. Seeing somebody go into this kind of fantastical world with such a grounded and personal take was helpful to keep trying to make sure that it all came back to their relationship with their bond and it never got too swept up in the sci-fi element of things. I thought that was a really good approach, and he was a cool guy to get to work with.

Press Play, which was written by Björkman and James Bachelor, also stars Lyrica Okano, Christina Chang, Matt Walsh, and Danny Glover. The film is currently in theaters, digital, and on-demand. You can check out our interviews with Rugaard and Björkman.

WhatsApp Has Not Abused Its Dominant Position in…

Horror Junkies Reveal the Movies That Should Be…