With only one week left to call the consoles currently sitting in homes around the world the current generation, both Sony and Microsoft are on the cusp of becoming outdated and replaced by newer tech. In no other console transition that I can recall in my thirty-some years of gaming, has there been such an overlap in the power and potential of the two (or more) respective console makers as they lead the charge into the next five-plus years of gaming. As we explored with our review of the Xbox Series X, we are taking a look at Sony’s PlayStation 5 and the launch experience that will be available to new owners starting November 12th.

After setting up the console and turning it on, you’re greeted with a familiar beep and instructions on how to connect the PlayStation 5 to the internet and get everything set up for initial use (neither next-gen console will actually boot up without first connecting online and going through a brief patching process). It’s all your run of the mill calibration and set up. Expect to set aside somewhere between fifteen and thirty minutes to get everything patched up and running once it’s out of the box and you’ve figured out how to attach the stand to set it up horizontally (the base rotates depending on if you want to set the console up horizontally or vertically, so double-check that when setting the PlayStation 5 up for the first time).

The DualSense controller will be the first step into next-generation gaming that players will be able to get their hands on with the PlayStation 5. There’s a good reason that Astro’s Playroom is packed in with every PlayStation 5 console: no other title available ahead of launch can showcase the controller’s potential quite like what Team Asobo has put together. Aside from the obvious slight changes in form factor to the PlayStation 5 DualSense controller, the innovations are most noticeable in two forms: the haptic triggers and the force feedback. With various tasks in Astro’s Playroom, the L2 and R2 triggers on the DualSense can offer varying levels of intensity and resistance depending on the task. For Astro’s spring suit, the controllers mimic a spring coil being compressed and increase the resistance the further down you pull.

At the same time, the DualSense offers a varying level of vibration and haptic feedback that varies depending on what sort of texture you’re running on. The feel of sand beneath your robotic feet or the solid steps while running across sheet ice both feel and sound different to the player. Of all the titles I was able to test out on the PlayStation 5 ahead of launch, Astro’s Playroom was the only one that offered a real representation of how the DualSense controller can be a next-gen controller. Other titles like Marvel’s Spider-Man Miles Morales had a small bit of resistance to the initial web-swinging while Bugsnax’s R2 button offered a gentle pull halfway down the R2 before you had to squeeze it the rest of the way as it attempted to mimic a camera shutter. I’m eager to see how developers can take this new technology and implement it in a first-person shooter or racing title.

While the Xbox Series X focuses on graphics, Sony moves in a different direction for a sensory experience on their next-generation console with a heavy focus on audio for gaming. The new Tempest Audiotech (currently limited to headphones) can turn any gaming audio into a 3D experience through native processing. I can close my eyes and hear objects whiz past my head not just from side to side but in every direction around me. 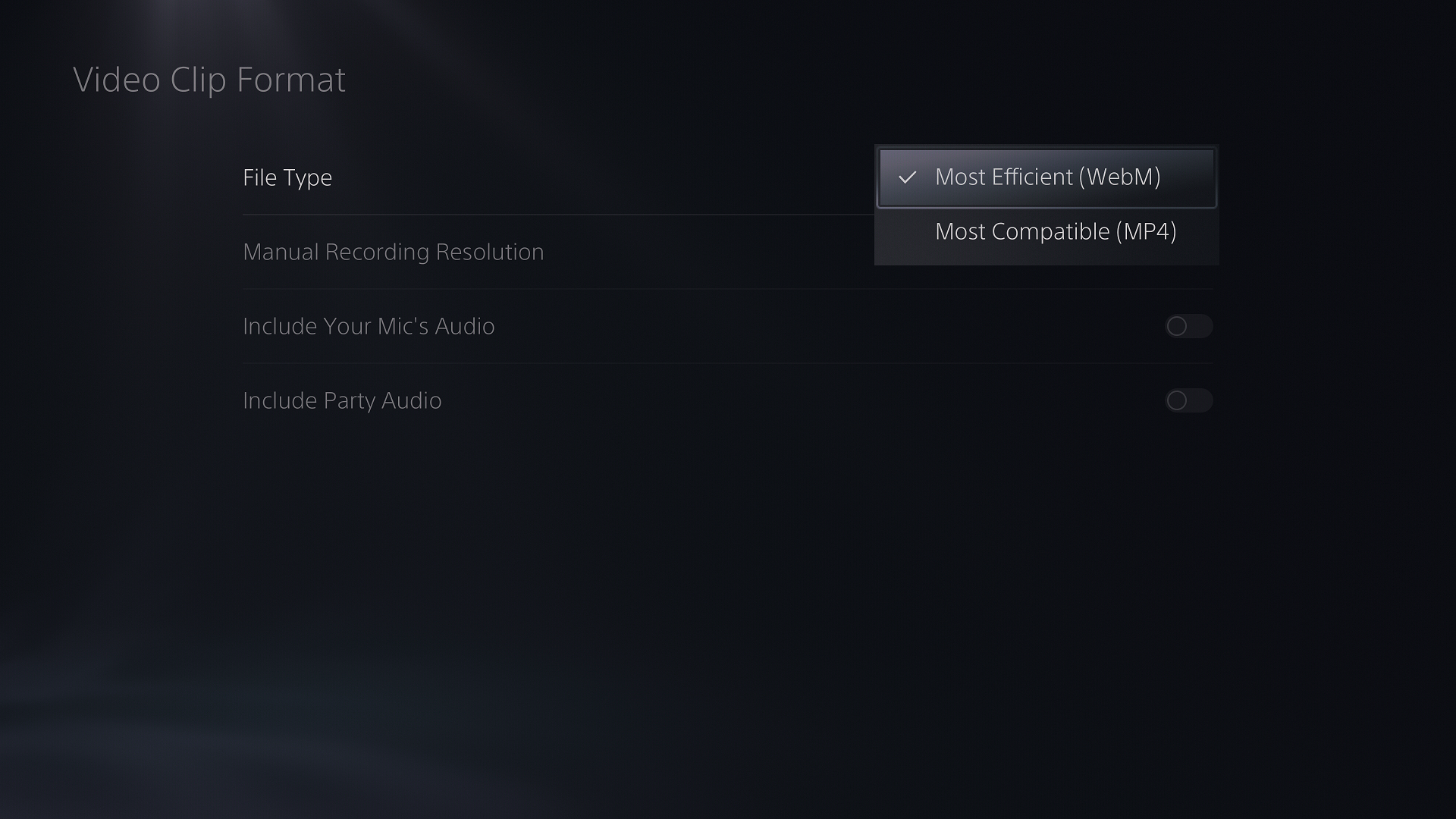 The PlayStation 5 UI is a rather strange design to explore if you’re so used to the multimedia focus from the last decade of HD consoles. Sony has taken the XMB design that’s persisted since the launch of the PlayStation 3 and transformed it into a user interface that’s focused on games first and foremost. Rather than the ever-expanding horizontal bar that the PlayStation 4 UI started out with, the PlayStation 5 gives gamers a lineup of their eight most recent titles plus the new Explore menu and PlayStation Store apps on the front page with everything else neatly tucked away. If you want to delve into some movies or music, you’ll need to jump into the Media tab (either from the top of the screen or by hitting R1). While in game, you can tap the PS button to bring up a quick hotbar across the bottom of the screen that serves as your point of contact for party chat, checking on download progress, adjusting audio mixing and more. It’s much less obtrusive than the PS4 quick menu that covered a good third of screen real estate.

All of the games you own are added as part of the Game Library, your one-stop-shop for everything you have owned or played on the PlayStation 4 and 5. Your Collection includes *everything* that you have touched on PlayStation 4, whether it’s a demo, free piece of DLC, or game you own on disc. Any game that isn’t actively owned on your primary account is noted with a locked symbol while the small handful of games that aren’t supported on PlayStation 5 (which sadly includes P.T.) are flagged with an interdictory circle. It’s a very small list of titles that aren’t supported on the PlayStation 5, so keep that in mind in case you ever had a growing desire to load up Hitman GO sometime.

Despite the promises of greatly reduced storage requirements for next-generation titles, neither the PlayStation 5 nor the Xbox Series X have seen a drastic reduction in file sizes for the titles arriving at launch. Instead, expect to see more of the usual 50-60GB installs as you unbox and install a new copy of Godfall or Miles Morales next week, or if you’re eager for the new Call of Duty Black Ops Cold War, look forward to setting aside roughly 130GB of hard drive space for that title alone. The smaller SSD in comparison to the Xbox Series X will fill up quickly as gamers expand their next-gen library but thankfully Sony is allowing players to offload PS4 games to external storage and still be playable.

When titles are installed to the SSD, you get a massive performance boost to existing PlayStation 4 titles and that’s not including any of the PS5-exclusive titles. Take Yakuza: Like a Dragon, for example. From save menu to gameplay, that’s roughly twelve seconds of loading; the same title on a USB 3.0 external hard drive (and similarly the PS4 hard drive) takes approximately twenty-six seconds to load. Bloodborne saw similar loading speed differences (10.6 seconds on SSD vs 24.6 seconds on external HDD to load a save in early Yharnam). For native PS5 titles, the SSD advantage is even more noticeable. From loading a save from the main menu to controlling Miles Morales, that’s not even two and a half seconds. Going from starting the app from the dashboard to enjoying gameplay takes fourteen seconds. 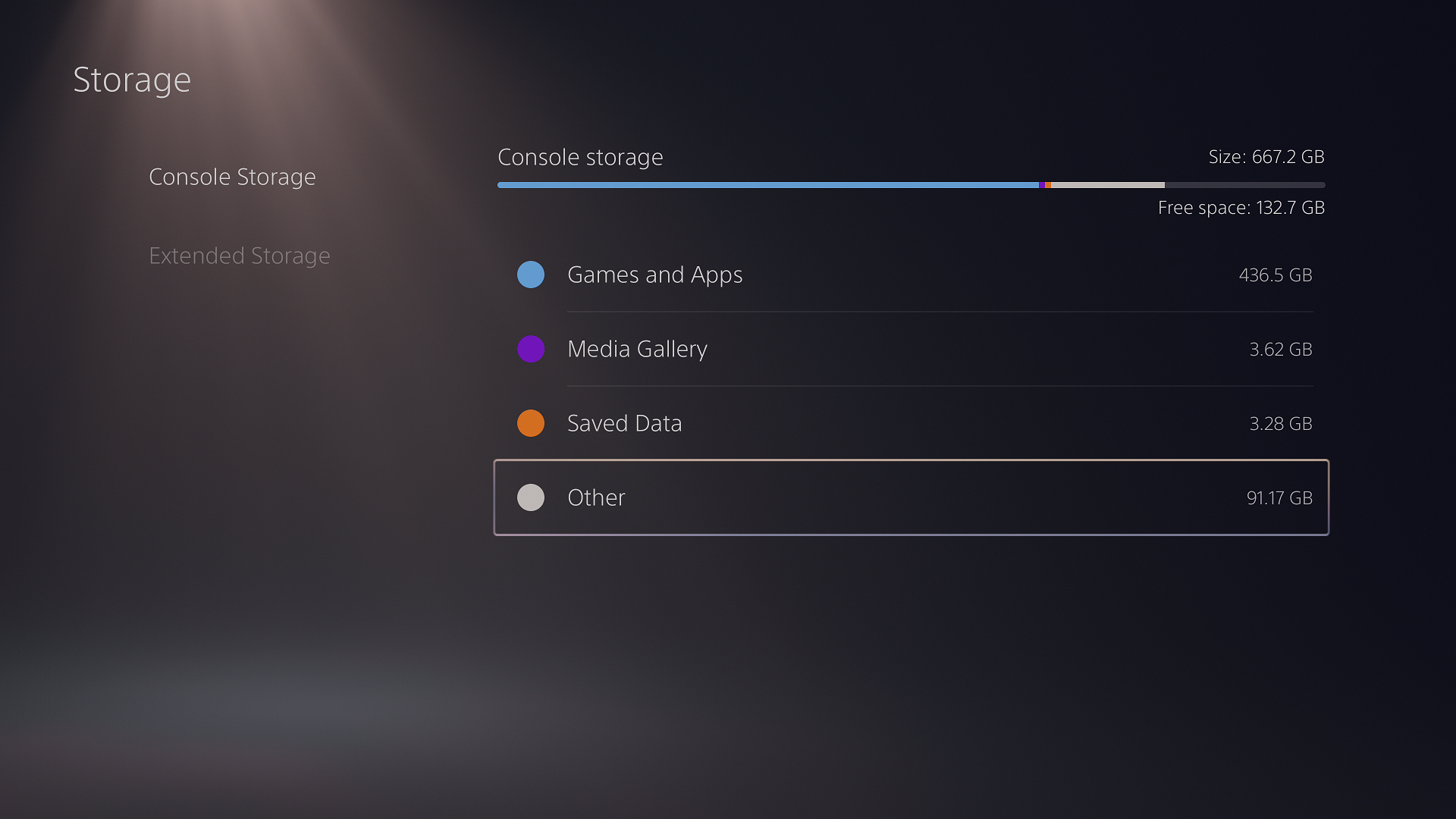 Sony has finally offered up a way for players to track their progress towards unlocking a new trying and that feeds into the new UI that Sony has created for the PlayStation 5. In a feature that’s new to PlayStation (and has been a part of the Xbox One UI since day one), players can finally get progress trackers towards key milestone trophies. From the few games I tried that supported the feature, the implementation is still fairly barebones: you can get a percentage or counter for objectives like collectibles left to discover for the trophy to pop but no specific details. In the case of Astro’s Playroom, you can get specific 15-second clips that can guide you to that tricky artifact or puzzle piece you might have otherwise missed. At launch, the system is an interesting concept but I would wait to see just how populated the guides and trackers can be to pass a final verdict on how beneficial the system will be. I know I’ll be referencing the hundreds of Demon’s Souls videos when I start reviewing that one next week.

The PlayStation 5’s answer to Smart Delivery is a matter that can be needlessly complex to first-time players. When you purchase select PlayStation 4 titles, you’re automatically granted a PlayStation 5 specific version of the game. On Xbox Series X, the game automatically detects which console you’re playing on and downloads the proper client and files. With how the store menu is set up on the PlayStation 5, trying to navigate to the proper version of a game can sometimes be trial and error. When I first downloaded Bugsnax on PlayStation 5, I unknowingly downloaded the PlayStation 4 client and only noticed when I didn’t have access to DualSense features. Thankfully this is a rather small game to redo load but for those on limited data caps? You might want to double-check just which version of a game you’re about to install.

Sony’s entry into the next-generation console war is the one that feels like a proper next-gen system. Rather than simply expanding on the existing libraries, Sony has established themselves as the console that’s going to bring gamers into a new era. The software and UI are both early on in their implementation, but it’s the combination of Sony’s new Tempest AudioTech, titles that can take advantage of the SSD, and the DualSense controller that truly make this console stand out among the rest.

Review unit provided by the manufacturer.

The PlayStation 5 is the console that feels like a true step into next-generation with the combination of the SSD, audio and controller trinity. Much like the Xbox Series X, the software support at launch is lacking but there is still enough there to differentiate from last gen’s PlayStation 4.

Spider-Man: Miles Morales has the most authentic character of 2020