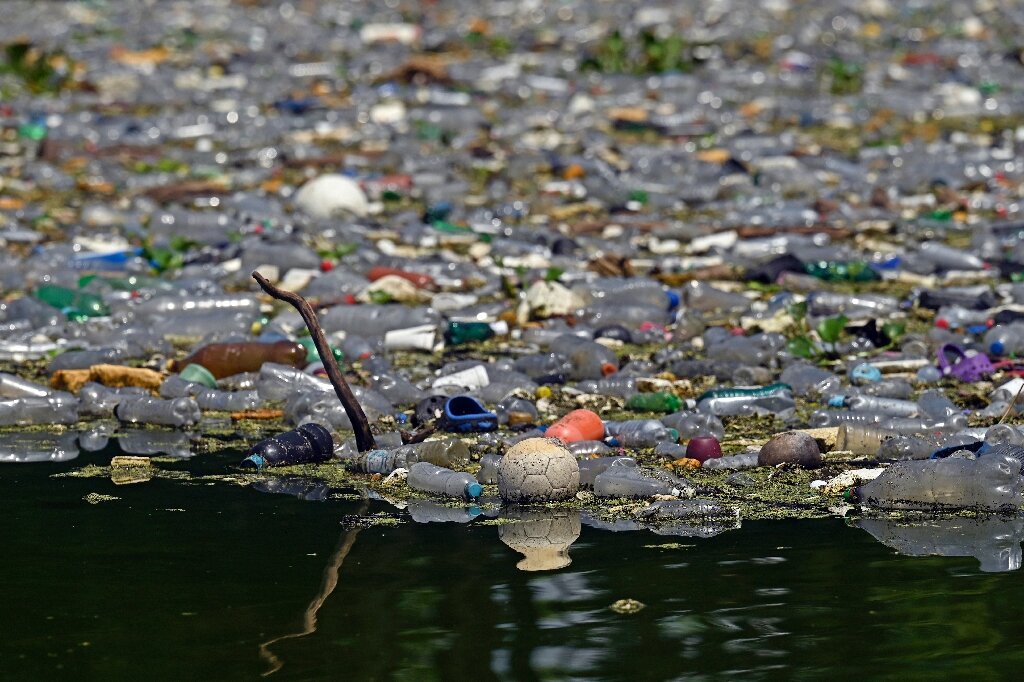 A blanket of multi-colored plastic waste flowing in from tributaries covers Lake Suchitlan in El Salvador.

It is a sorry scene that has also become an all too common sight on the Caribbean beaches of Honduras, where thousands of tons of rubbish arrive from neighboring Guatemala.

Fizzy drink bottles, medication packets, tattered flipflops: all sorts of plastic rubbish can be found floating on 13,500-hectare (52 square mile) Lake Suchitlan, which serves as a reservoir for a power plant and is considered by UNESCO to be a wetland of international importance.

Local fishermen say the pollution forces tilapia and cichlid fish deeper into the artificial lake—the largest body of freshwater in the country—where they cannot be reached with fishing nets.

“It has been more than two months since we’ve been able to fish,” angler Luis Penate, 25, told AFP.

To make ends meet he has started ferrying around tourists in a boat owned by another fisherman.

Ducks clear paths through the rubbish, little tortoises climb on top of floating bottles to sunbathe and skinny horses wade into the lake to drink the contaminated water.

This contamination is unprecedented, says Jacinto Tobar, the mayor of Potonico, a small village 100 kilometers north of San Salvador in Chalatenango department.

“The fauna and flora are suffering a lot” and there are ever fewer tourists, he said.

The fishermen must also compete with 1.5 million black cormorants that inhabit the lake, according to Tobar, who says they have become a type of plague since arriving as migratory birds and then staying put.

With a population of 2,500, Potonico is the most affected of 15 riverside villages.

The state body that administers the reservoir employs dozens of workers to clean the lake by hand.

Some locals also help out with the task, which Tobar says will take three to four months to complete.

“What can we hope for in the future if we don’t look after our environment, if we soil our streets, rivers, lakes, forests and beaches,” said President Nayib Bukele earlier this week at the launch of a “Zero Rubbish” campaign.

Environment minister Fernando Lopez said the country generates 4,200 tons of waste a day, of which 1,200 tons end up in rivers, beaches and streets.

‘Unable to stop it’

One of the worst affected areas of the Central American Caribbean coast is the beaches of the Omoa region in Honduras.

It is a beautiful coastline with abundant vegetation and palm trees, some 200 kilometers (120 miles) north of Tegucigalpa.

But in some places the sand is almost entirely covered with plastic waste of all sorts, including syringes.

“This rubbish comes from the Motagua river on the Guatemalan side, they weren’t able to stop it,” said Candido Flores, 76, a local resident.

“As the river rises, it returns again.”

It has created islands of floating waste that have been denounced by local authorities and activists, and has even caused tensions between the two countries.

Every year, some 20,000 tons of plastic waste comes through the Las Vacas river, a tributary of the Motagua, according to The Ocean Cleanup, a Dutch NGO.

Most of that comes from a landfill in the Guatemalan capital.

Environmental activists say the problem must be tackled at its source.

“We must attack where the main flow of rubbish comes from,” said Eduardo Arguera, 29, an architecture student at the University of El Salvador, who has launched several clean up campaigns.

To contain plastic waste and prevent it from reaching rivers and lakes, he suggests fencing it in at strategic points.

Ricardo Navarro, president of the Center of Appropriate Technology, says only 30 percent of the waste floats; the rest sinks to the bottom of the bodies of water.

Meaning what is visible, quite literally, is just the tip of the iceberg.

The United Nations Environment Programme says 11 million metric tons of plastic enters the world’s oceans every year, and warns that number could triple in the next 20 years.