Isn’t it nice when you can just forget about the worrying rise of fascism across the world and just play some video games? And isn’t it just as nice that despite the current renaissance of the far right over the past half a decade, video games still let you kill as many Nazis as you can handle? Partisans 1941 takes the real-time squad strategy genre back to the second World War, with mostly satisfying, albeit mixed results.

If you’ve played a game like Desperados III or Shadow Tactics: Blades of the Shogun, you’ll be familiar with the basic principles of this one, too. You control some ragtag group of different characters through enemy territory, staging elaborate ambushes and cunning assassinations. But while first appearances might look as if Partisan 1941 is cut from entirely the same cloth, there are quite a lot of differences that make it a more unique, although not always a better experience for fans of the genre.

Iron Harvest Review – A Diamond in the Rough

For starters, Partisans 1941 is obviously set during World War II, and if you thought there were a lot of guns in the Wild West you’ve obviously never seen a WWII film, documentary, or talked to a middle-aged man with an unsettling fixation on the subject. While you can wield knives and creep through the shadows, a lot of the fighting in Partisan 1941 will be really loud. This game attempts to codify guerrilla tactics and fighting, often asking you to remain stealthy only until you have the advantage, then commencing a small shootout to see whether or not your strategy will prevail.

It works quite well, but an elemental of randomness makes even your best-laid plans somewhat unsatisfying. When you have a patrol of nazi’s completely by surprise, with each of your partisan fighters in the perfect position, it’s a little annoying to see the first half a dozen bullets miss, especially if it means one of your fighters is injured as a result.

The other games in this genre such as the aforementioned Desperados III ditched the randomness of realism for a set of rules that you can learn and exploit as you progress through, and in my opinion, that works better for this type of game. Although Partisans 1941 does include the tactical view that lets you slow down time and adapt any plans that might have failed to win the day, there is an underlying frustration when you need to adapt because of a random number generator (RNG) rather than your own failings. Small encounters can often be overcome with a little bit of stealth, timing, and patience, but it’s the staging of an ambush where perhaps Partisans 1941 really stands on its own, even if the outcome isn’t as dynamic as you might hope for. While managing your position and picking off any outlying and isolated Nazis you come across, you’ll also have to manage your ammunition as well. Unlike games like XCOM, you won’t be able to reload indefinitely and will have to resupply from the corpses you leave in your wake. It’s an interesting system, but not one that payoffs off especially, doubly so when half your scarce bullets might disappear in a drawn out encounter.

There is also a level of management to Partisans 1941 as well, where you’ll have to balance your equipment for each soldier, as well as the resources for your camp as well. There are rudimentary building mechanics that allow you to expand your base of operations, as well as objectives you can assign your teammates to in order to bring in potential rewards between the story missions. These moments are a fun distraction, and a chance to take a breath between the high stake engagements, but they don’t do anything we haven’t seen before. A need to bring in food supplies likewise means you’ll spend half of your missions searching through kitchen cupboards looking for cheese as well as bullets and anything else you can use to survive the harsh eastern front which can slow the pace down to a crawl.

What makes this even worse is that the icons you’ll come across as not as clear and readable as the game seems to believe they are. Most information, including the name of the item, is hidden behind an information tab accessible by right clicking it. Some items come with mini-tutorials that explain their purpose, but most don’t, making it challenging and painfully slow to determine what you should be carrying around. Although as you teach yourself what everything is and how to use it, the issue does diminish, it doesn’t make the beginning of experience with Partisans 1941 the strongest it could have been.

In fact, the entire User Interface for Partisans 1941 seems to assume a level of understanding a new player may not automatically have. I certainly had trouble utilising some of the camp menus until I realised that you had to drag the character icon into the empty spaces, because that didn’t feel like the easiest solution. Similarly, objectives can be hard to understand and sometimes involve multiple stages that are not explained. One early example is a mission to destroy a tank, which requires you to clear the repair yard it is resting in. What it doesn’t tell you though, is that you’ll need to require the explosives from a nearby van first. 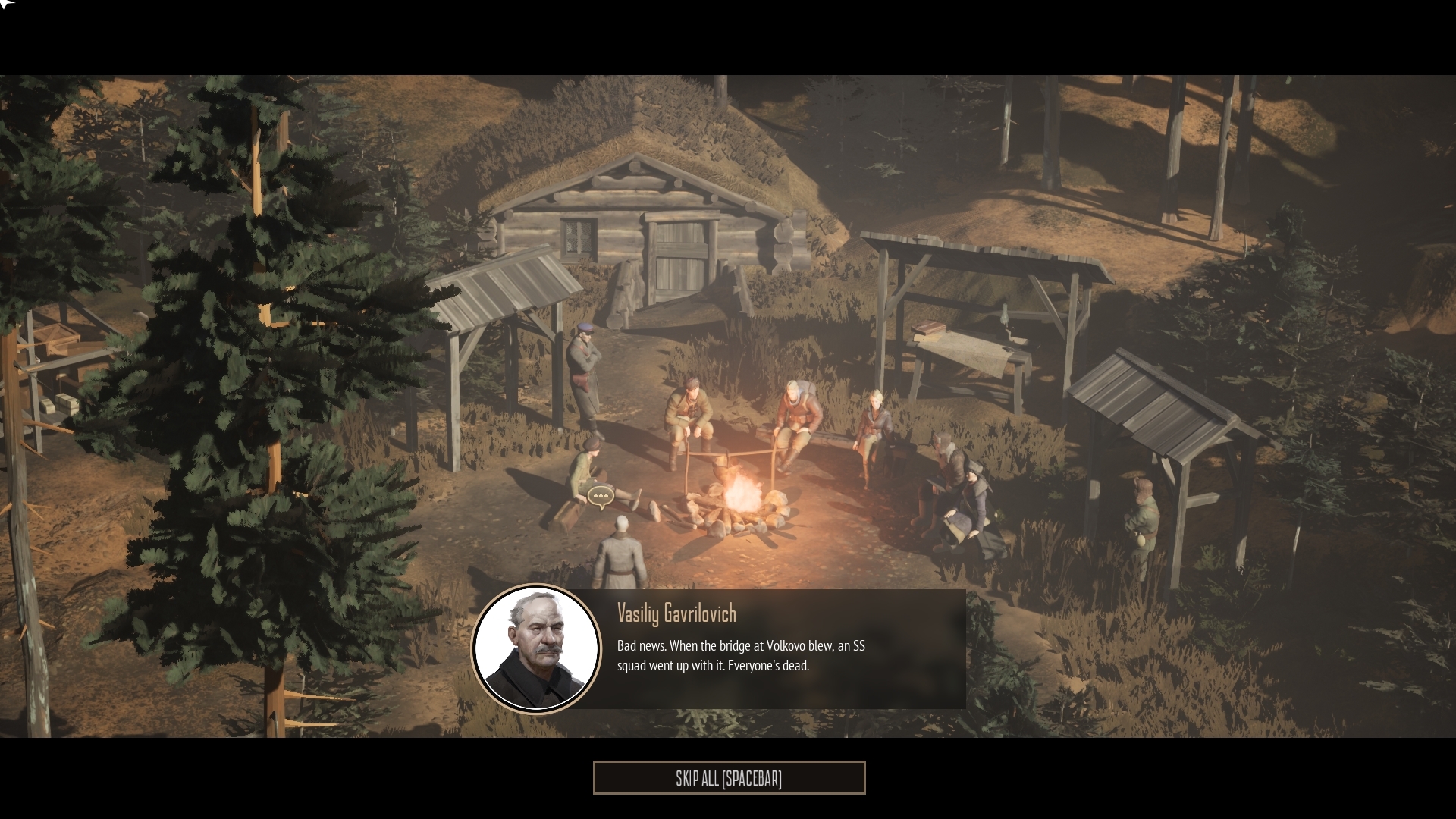 There are a few quality of life improvements that remedy these negative aspects though. Your characters will automatically begin sneaking when near enemies, making the management of their movement a little easier. Your characters will also unlock new skills as you progress with them, and that is streamlined and easy to understand, with immediate, noticeable effects in the game.

This Partisans 1941 review might be coming across a bit negative, and I think that’s because this is not a game that everyone will like. It has blended the real time strategy of Desperados with the random outcomes of XCOM, forcing you to think about more than just the unbreakable rules of the game but the chances and consequences of any encounter. This is a game that doesn’t hold your hand or even point you in the right direction. If you get your satisfaction from overcoming confusion and literally beating the odds, Partisans 1941 could be the game for you.

Partisans 1941 blends differing aspects of the tactical squad genre with mixed results. While the staging of ambushes and scouting of strongholds is as satisfying as any other game, the actual combat and fireworks leave a little bit to be desired.

Red Dead Online’s next legendary animal is a Ruddy Moose

The cable industry should be trembling after T-Mobile’s new…

What is the Qualcomm Immersive Home Platform?

Ode To An AVO 8 Multimeter