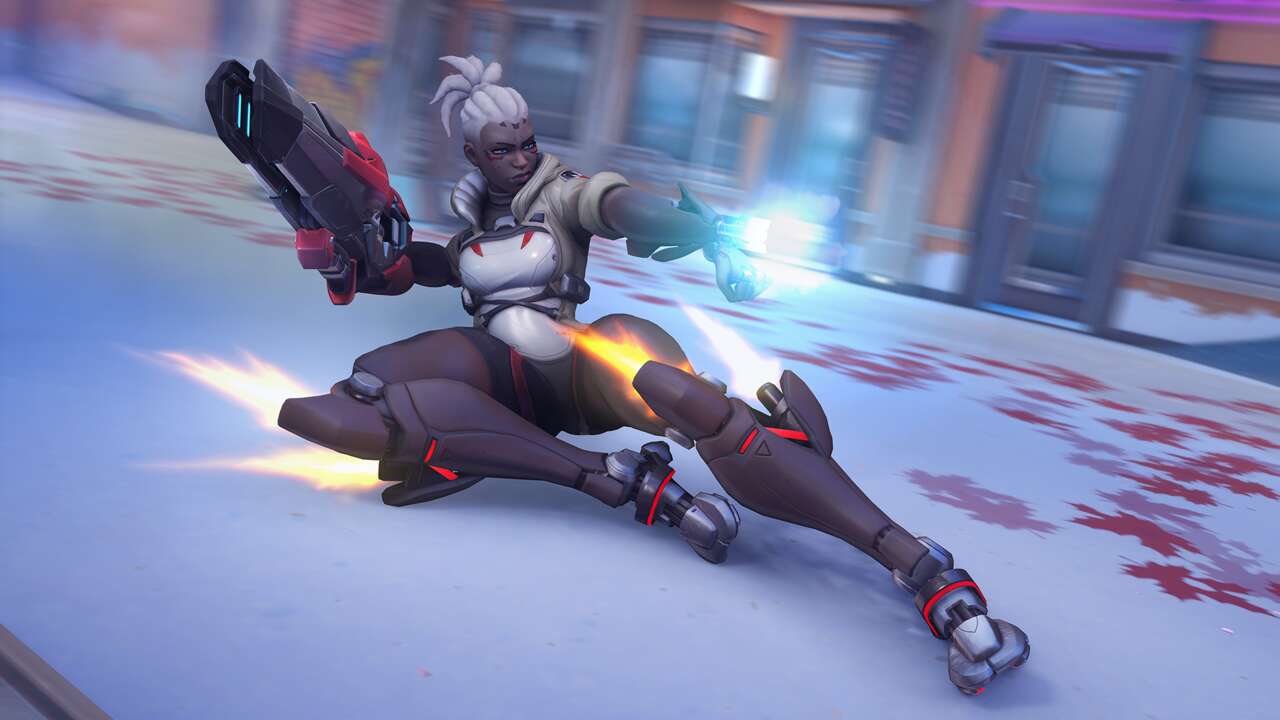 Overwatch 2 has finally arrived, bringing a ton of change to the hero shooter. That means a switch to 5v5, a new battle pass, and new heroes to kick off the launch. One of those new heroes is Sojourn, a new DPS hero with a high-powered machine gun that is also a railgun. While Sojourn has been a known quantity to the Overwatch community for quite some time, she is now actually in the game and can be used. Here’s everything you need to know about Sojourn.

Sojourn is an offense focused DPS character, who primarily deals damage using her gun and its two modes of firing. For anyone who has spent time playing Soldier 76, you’ll know that Sojourn deals the majority of her damage by shooting. While she does have one damage-dealing ability in her Disruptor Shot, the main method of getting kills is using the machine gun fire to deal damage and charge the secondary fire, which shoots a railgun beam. The railgun beam, especially at a high charge, can deal a significant amount of damage. It can also one-shot most DPS and healers (anyone with 200 health) at full charge if you hit a headshot and does about 75% of that if you hit them in the body.

That means the primary strategy for killing someone is to open with the machine gun fire and finish with the railgun, since that combo will be quicker than most other enemies attacks at medium range. Sojourn isn’t great in long-range firefights due to her primary fire not being hit-scan like some other DPS characters, but instead a projectile that has a slight lead time on it.

Power Slide: Sojourn has a ground slide that quickly moves her across the map and can be canceled into a high jump.

Disruptor Shot: Launch an energy burst that snares and deals damage to enemies within it.

Ultimate Ability Overclock: The secondary fire of her weapon auto-recharges for a short duration and charged shots pierce enemies.

Sojourn is a front-line DPS, as long as you keep moving

Sojourn has the damage output to be on the frontlines of any fight, but she doesn’t have a healing ability like some of the other frontline heroes, like Reaper and Soldier 76. Between her Disruptor Shot, which can slow enemies down and make them easier to either kill or disengage from, and her Power Slide, her fast movement can make up for her lack of self-heal. That does mean you will need to make sure you are constantly moving around the field, making it harder for people to hit you.

But she’s not a great defender

Sojourn’s biggest downfall is that she is particularly great on defense. For modes like Control Point or Push, this isn’t a big deal since those game modes are just one prolonged firefight, but for Payload, she isn’t great for defense. The reason for this is that her primary gunfire doesn’t have great range due to it not being hit-scan and you need to be consistently dealing damage in order to keep her alt-fire charged. This means that sitting at a chokepoint or trying to hold a control point down puts Sojourn at a disadvantage compared to some other DPS characters. Sojourn is excellent when you are constantly in the fight and dealing damage, but sitting back and waiting for your opponent is not ideal for Sojourn.

Sojourn’s ultimate ability relies on your own skill of being able to consistently hit with the railgun fire, but if you have decent aim, it can turn the tide of battle. There isn’t much build up to it like with Cassidy’s Deadeye nor does it still take the same amount of time to kill enemies like Soldier 76’s Visor. Instead, Sojourn gets to deal high-damage attacks with her railgun five to six times during the ultimate and it can pierce through enemies. That means if the entire enemy team is stacked up near each other, you can easily get a triple kill and deal some damage to the remaining enemies. Since it charges so quickly too, the enemy team doesn’t have much time to scatter when they hear the ultimate being used.

Sojourn pairs well with most team comps, but can be hard-countered by Pharah

While her defensive skills aren’t impressive, Sojourn is a fairly flexible DPS character, so she works well with most team comps. Her fast movement means that she doesn’t need a hard pushing tank and she can deal damage at most ranges, so she can pair well with a close ranged DPS character like Reaper or with a long-ranged character like Widowmaker or Ashe. The only time Sojourn might not work is if you need a hit-scan character to focus an enemy Pharah. Sojourn typically fills the same role as Soldier or Cassidy, but not being hitscan means she will have a hard time taking down a Pharah. Her secondary railgun can hit a flying Pharah, but you won’t be able to deal enough damage in a 1v1 to use it. If your other DPS isn’t hit-scan, you will likely need to switch.

Research and recipes reveal the benefits of regional Turkish plants