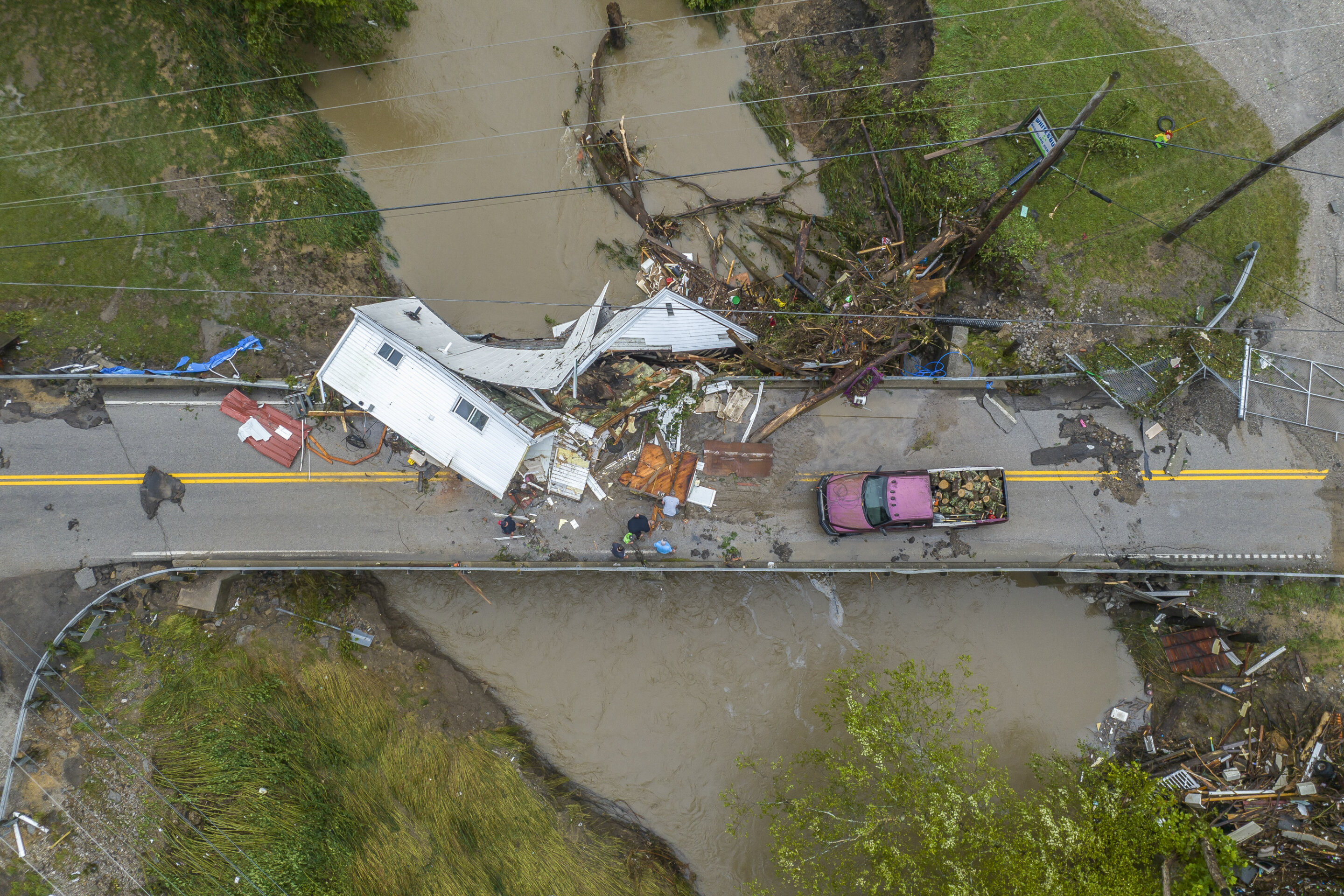 Hundreds of miles apart, but still connected by the same stubborn weather system, urban St. Louis and rural Appalachia are showing how devastating flash flooding can be when souped-up storms dump massive amounts of rain with no place to go.

In St. Louis, the paved city environment couldn’t soak up the intense rainfall. In Kentucky, Virginia and West Virginia, steep hills and terrain of narrow river channels funneled water into the same place.

Although a single storm system triggered the downpours, different geographic features played a role in the middle, ending with the same result: Flooding, the second deadliest weather phenomenon in the United States. Floods kill about 98 Americans a year and last year claimed 146 lives.

“Places like St. Louis and Kentucky, even though they’re different, they’re overwhelmed,” said private meteorologist Ryan Maue, a former chief scientist for the National Oceanic and Atmospheric Administration. “There’s just no way to move that much water coming out of the sky fast enough. It needs to go somewhere.”

A LOT OF RAIN

In Missouri and Illinois, the first batch of downpours Tuesday and Wednesday dropped a foot (30 centimeters) of rain in some places, up to 10 inches (25 centimeters) in others with another 2 to 4 inches falling Thursday. In eastern Kentucky, 8 to 10.5 inches (20 to 27 centimeters) fell.

“It’s not just how much rain fell, but where it fell, how exposed people were, how close the infrastructure is to where the heavy rainfall falls or where the channels rise,” said Kate Abshire, flash flood services lead at the National Weather Services’ Water Resources Branch.

In urbanized St. Louis, rainfall that would normally seep into the ground like a sponge ponded and flooded, Abshire said. In Appalachia, the people who live in the region, the roads, the buildings and the rainfall all were concentrated by river channels that flooded, she said.

It all started with the same weather condition—a stationary boundary between different pressure systems “that’s been hanging out between the central Plains and central Appalachians, east to west,” said Bob Henson, a Colorado-based meteorologist and writer. “The same frontal zone that triggered the St. Louis flooding also triggered the mid-Appalachia flooding.”

What happens is that unstable moist hot air, pumped from a warm Gulf of Mexico over a dry and super hot Texas, travels along the boundary and forms storms, one after another. And they keep smacking the same place with storms, similar to a line of trains chugging down the track, meteorologists said.

This means “extreme rainfall rates” of one, two and even three inches per hour, said Zack Taylor, a senior meteorologist at NOAA’s Weather Prediction Center. “These little episodes of storm systems have been riding along the boundary.”

And the storm track isn’t moving much to take them elsewhere, instead it “just kind of hangs out there,” Taylor said.

As the world warms, scientists expect more frequent and intense downpours—and this event fits that, meteorologists said. No one has done the specific studies needed to attribute these storms to climate change yet. But these aren’t the first big floods of the year or even the season.

Some experts fear that weather forecasting models aren’t keeping up with extreme rainfall and are under-predicting how much rain will fall. That was the case last month, when the Yellowstone region had massive evacuations because of flooding, and last year when the New York-New Jersey area was hit by the remnants of Hurricane Ida.

Warmer air holds greater amounts of water that it can then dump. In the case of the St. Louis and Appalachia flooding, the air coming north from the Gulf of Mexico is one or two degrees warmer than normal for this time of year—and on the way north it passes over a Texas that is breaking records for heat with Galveston going 10 straight nights of the warmest on record, Henson said.

In both places, downpours persist with forecasters seeing more rain, at times heavy, through the weekend and into early next week.

“The ingredients are certainly there for some intense rainfall,” Taylor said.

Hurricane Ida: Two reasons for its record-shattering rainfall in NYC and the Northeast long after the winds weakened