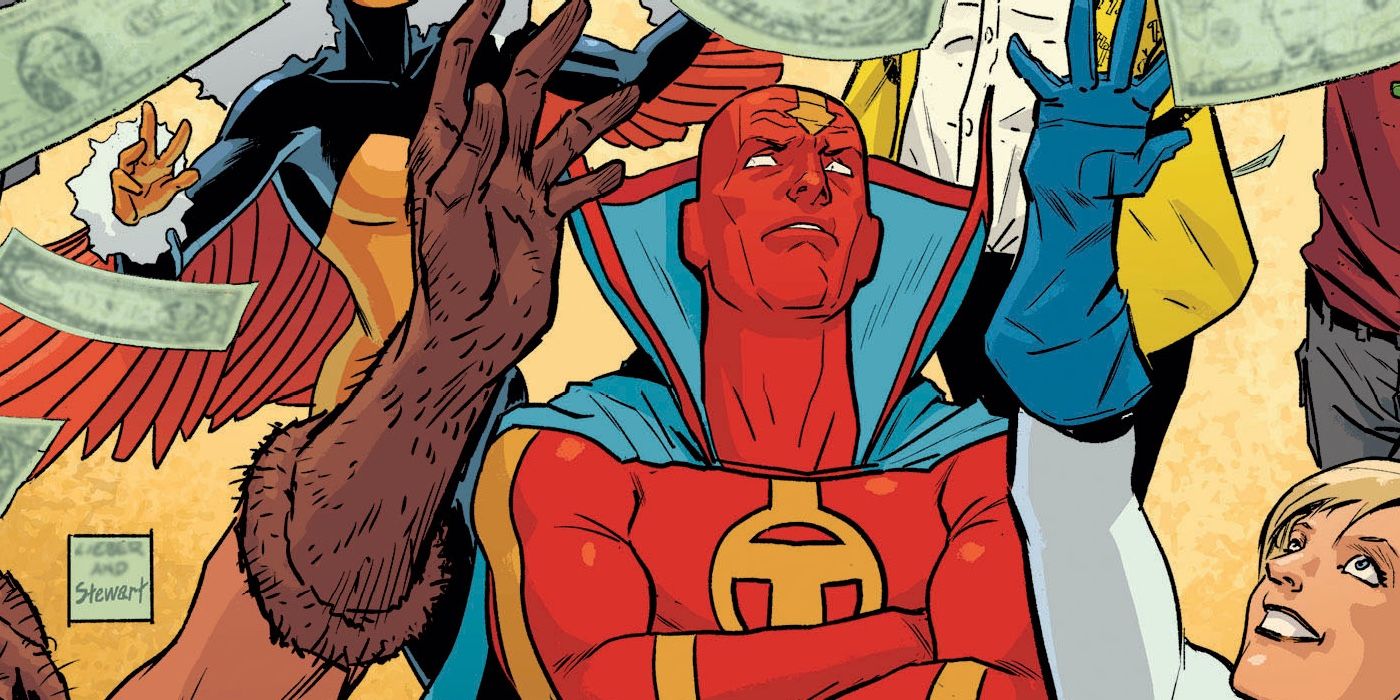 DC has unveiled the first look at One-Star Squadron, a new superhero team that mixes traditional heroics with the business world!

This December, DC unveils One-Star Squadron, a new book where super-heroics meets capitalism. The book, on sale in print and digital December 7, is written by the award-winning team of writer Mark Russell and artist Steve Leiber and promises “Superman-level services at Bizarro prices.”

Mixing the worlds of superheroes and business has proven popular with creators in the past. Perhaps the most notable example is Heroes for Hire: Luke Cage and Iron Fist. For years, these two made a name lending out their services to anyone who could pay and the concept has since had lasting appeal.  Other notable examples include Booster Gold – who traveled back to the 21st century seeking fortune and glory and licenses his likeness for toys and merchandise; and Damage Control, a company specializing in cleaning up after incidents involving superheroes. This intertwining of heroics and commerce goes to the next level in One-Star Squadron, written by Eisner and Ringo Award nominee Mark Russell with art by the Eisner-winning Steve Leiber.

Related: DC Admits Its New Series is Ripping Off Marvel (And That’s Great)

One-Star Squadron follows the adventures of a group of heroes, led by the Red Tornado, who will take on any job, be it getting a cat out of a tree or stopping an invasion—they even have their own app people can use. One-Star Squadron’s membership ranges from well-established DC heroes like Power Girl and Plastic Man to truly obscure characters such as Minuteman, Gangbuster, and the Heckler. Together, the One-Star Squadron must save the world – without the resources of Batman or the Justice League at their disposal – and do it all with a smile. So probably the biggest mystery facing the Squadron is who is actually signing their checks?

DC has promised that One-Star Squadron will appeal to anyone who has worked a mind-numbing, menial job. Being a superhero is similar to working a service-sector job in many ways—only most heroes do it for free; some would balk at collecting money for what they do. Comics such as One-Star Squadron look at what happens when the heroes start getting paid. Writer Mark Russell and artist Steve Leiber will explore this intersection of superheroes and capitalism, and in the process have something to say about our own hyper-consumerist society, one obsessed with convenience and value.

One-Star Squadron embraces many elements of the modern business world, such as apps and ratings, giving it a fresh and contemporary feel. It’s shaping up to be a superhero book for the 21st century. One-Star Squadron mixes traditional superhero action with the every day, 9-5 working world, creating a unique book that many fans likely will be able to relate to.

The MCU Ignored a Crucial Part of Captain America’s Costume

Everything To Know About Bravo Newbie Julia McGuire