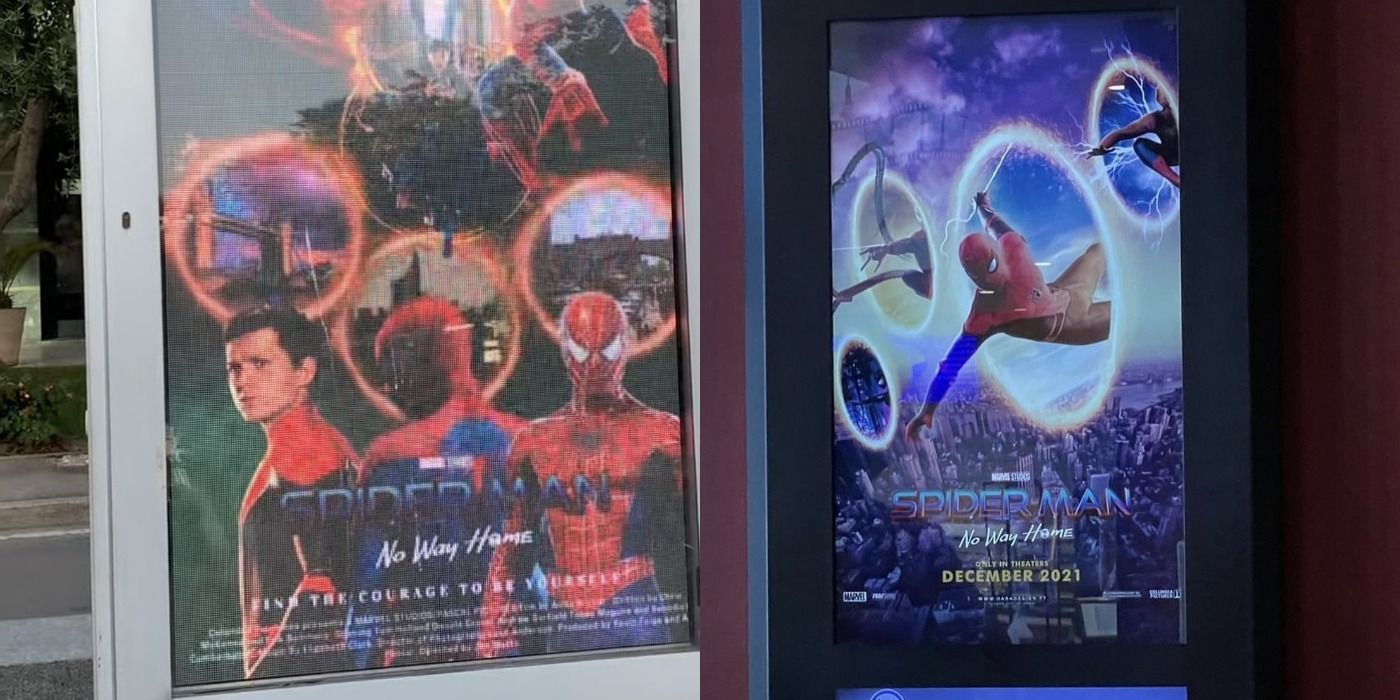 As the December 17th release date approaches for Spider-Man: No Way Home, movie theaters are now using fan posters to promote the movie.

As the December 17th release date for Spider-Man: No Way Home approches, movie theaters are using fan posters to promote the movie. All of Disney/Marvel Studios’ projects were subjected to numerous delays due to the COVID-19 pandemic. As part of the Marvel Cinematic Universe’s Phase Four, No Way Home was originally supposed to hit theaters in July but was pushed back twice as the studio reworked its release schedule. The MCU’s third entry in the Spider-Man franchise is arguably one of the most anticipated (and secretive) comic book movies to date.

Amid a partnership with Marvel Studios, Sony owns the rights to Spider-Man-related characters. It’s been long rumored that No Way Home will pay homage to Sony’s past with the franchise by embracing a multiversal concept and featuring characters from Sam Raimi’s trilogy and Marc Webb’s The Amazing Spider-Man films; in particular, Tobey Maguire and Andrew Garfield’s Peter Parker. Exacerbating these rumors are the reports that Alfred Molina’s Doc Ok (Spider-Man 2) and Jamie Foxx’s Electro (The Amazing Spider-Man 2) will be appearing as villains in the upcoming film. Marvel’s latest Disney+ series, Loki, finally introduced the MCU’s multiverse; lending credence to theories surrounding No Way Home. However, with five months to go, Sony—which handles promotion—still has not put out a trailer or even an official teaser poster for the film.

Related: Every Spider-Man Suit Confirmed & Rumored For No Way Home

No Way Home’s lack of promotional material hasn’t stopped movie theaters from promoting the film differently. Culture Crave on Twitter recently shared a picture of the marquees of two movie theaters, Cinepalace (art by OfAmazingSpidey) and Westown Movies, which are using fan posters among their upcoming releases. Westown Movies in Delaware even used artist Nuno Sarnadas’ poster on the theater website. Check it out below:

These “fake” posters are indicative of the hype surrounding No Way Home—which easily could become the biggest blockbuster of 2021. Some smaller theaters appear desperate to begin marketing for it; while larger theaters can only use official marking materials, smaller ones often use fan art (sometimes by accident). The use of these posters does nothing to confirm any plot details. The only real look at the films fans have gotten has been through merchandise. That said, Marvel/Sony clearly produced and are marketing with projects like Loki, What…If?, and the larger MCU in mind as to not spoil any multiverse-centric details.

Spider-Man: No Way Home will see the return of Benedict Cumberbatch’s Doctor Strange; this time, as a mentor to Tom Holland’s Peter Parker/Spider-Man. Doctor Strange in the Multiverse of Madness is poised to tie into the events of WandaVision, Loki, and No Way Home. With What…If? set to premiere on Disney+ August 11 and expected to directly connect/lead into No Way Home, fans can probably hope to see the long-awaited poster and trailer for Spider-Man: Far From Home’s sequel next month. Until then, fan art and posters will have to do.