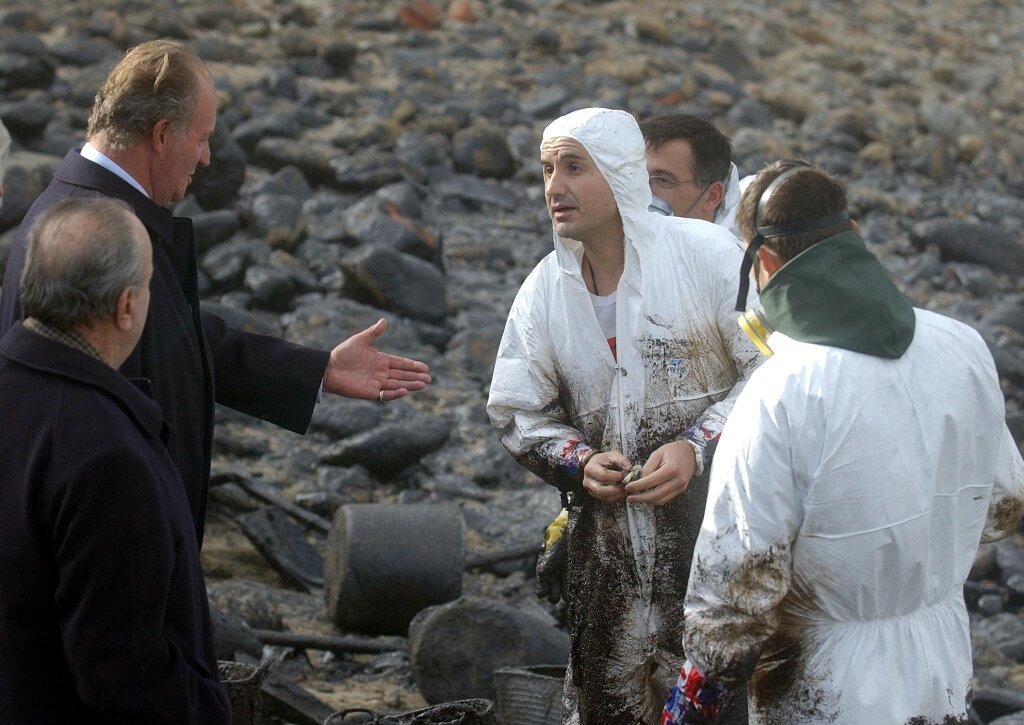 It was one of Europe’s worst-ever environmental disasters.

But 20 years after the oil tanker “Prestige” broke apart off northwestern Spain, covering thousands of kilometres (miles) of Atlantic coast with crude oil and killing 200,000 seabirds, some fear it could happen again.

The tragedy unfolded just off one of Spain’s most scenic coastlines, turning the beaches of Galicia “black”, devastating the region’s fishing industry and leaving a trail of death and damage as far as France and Portugal.

The shock is still raw two decades on, said Alberto Blanco, former mayor of the seaside town of Muxia, close to where the single-hulled Bahama-flagged Liberian tanker first got into trouble during a storm on November 13, 2002.

The crew issued a distress call after a gaping hole several metres wide appeared in the ageing vessel’s hull.

As soon as he heard the news, Blanco recalled rushing to the seafront and seeing the vessel was “very close to the coast and that the situation was very serious.

“The ship was listing in very rough seas, with a swell that was six to eight metres (20-26 feet) high,” he said.

The following day its 77,000 tonnes of heavy-grade fuel oil began leaking into the sea.

With the storm still raging, the Spanish authorities tried to tow the tanker further out to sea, in a controversial decision that went against an emergency plan drawn up by experts calling for it to be brought to port to contain the leak.

After six days adrift, the vessel broke in two and sank some 270 kilometres off the Galician coast, coming to rest at a depth of 3,500 metres and causing the worst-ever oil slick on the Iberian peninsula.

“The scope of the catastrophe was enormous,” with consequences “not only in Spain, but also in Portugal and France,” said Sara del Rio, a researcher with Greenpeace Spain.

In all, the tanker spilled an estimated 63,000 tonnes of fuel oil into the Atlantic, coating nearly 3,000 kilometres of the coastline with foul black sludge and killing nearly 200,000 seabirds, despite the efforts of tens of thousands of volunteers.

“The rocks were full of black tar, and so were the beaches,” Blanco recalled. “Cleaning them was incredibly difficult, because it was slimy and sticky, and it just came back again with the tide, which gave you a sense of impotence and rage.

“It was a never-ending battle.”

After a cleanup that lasted months, and a complex trial that took years, Spain’s Supreme Court in 2016 found the tanker’s skipper, its British insurer The London P&I Club, and Liberian owner Mare Shipping Inc liable for the disaster.

It sentenced the Greek captain, Apostolos Mangouras—who was 67 when the “Prestige” went down—to two years in jail, and ordered that the owner and the insurer pay 1.5 billion euros ($1.5 billion) in compensation, mostly to the Spanish state.

NGOs hailed the ruling, but expressed regret that no politicians were called to account despite the “disastrous” decisions taken by the Spanish government of right-wing premier Jose Maria Aznar and the Galician regional authorities.

“There were misguided decisions, such as moving the ship away from the coast instead of bringing it closer to a port to contain the impact,” said Greenpeace’s Del Rio.

“It caused the spill to spread in such a way that it was impossible to control it,” she added, saying the court did not “draw all the necessary conclusions”.

But such measures have not entirely eliminated the risk of a new oil spill.

“At any moment a catastrophe like the ‘Prestige’ could happen again,” said Del Rios.

“Firstly, because there are still ships transporting oil that are in poor condition. And secondly, because more and more fossil fuels are being transported.”

Daniel Craig Seems Much Happier on Knives Out Than James Bond